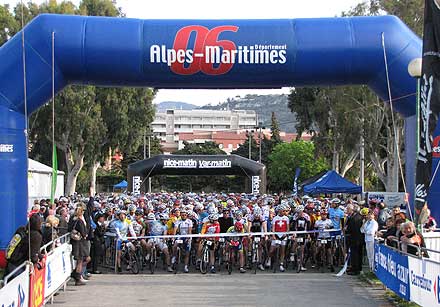 I rode the La Charly Bérard with a girlfriend. It was the first time for both of us and we’d elected to ride the shorter course: only three hills. At the start, the organisers were urging all the girls to the front of the peloton. We declined. What was the point, we were only going to be overtaken by the boys. We knew it would be much better to get underway at our own pace, well to the rear of the peloton, out of everyone’s way.

Five minutes after the depart réal, there was just the three of us: me, my friend and a guy 500 metres up the road. I managed to bridge up to him once past the steepish 2km climb to Falicon. As I drew alongside, I engaged him in polite conversation and soon realised that I was talking to the Wim Vansevenant of La Charly Bérard. Well not this year pal; it was going to be a three-way, tightly contested fight to the finish to be this year’s lanterne rouge.

It was a perfect day for a ride, sunny without being too warm. And, with the Broom Wagon keeping us company, we were in no danger of getting lost. I had cycled most of the route beforehand, so knew where to go and what to expect: for me, the perfect scenario. Just as well really given that the guy charged with removing the “fleches” (directions) was a couple of kms up the road from us.

So how did we fare? My friend won the Lanterne Rouge and Wim Vansevenant claimed the same prize for the medium course. Me, I was just glad not to be last.

However, I had won a prize in the tombola: a month’s cycle training. I was thrilled. I never win anything on tombolas or in raffles. In fact the last thing I won was a box of broken biscuits in a working men’s club raffle when I was playing in the bank’s ladies darts team. I know, is there no end to my sporting talents?