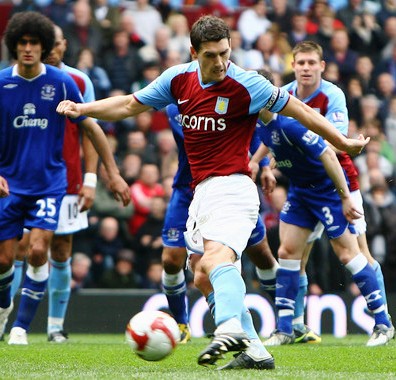 I’m often asked what I miss about the UK, usually in anticipation of me reciting a long list which includes family and friends, baked beans, Branston pickle or other such cherished culinary icons. I’m sure you can understand that my popularity quotient has risen immeasurably since my move from central London to the Cote d’Azur. I have a guest bedroom (just the one mind), so family and friends can come and visit. Because there’s a lot of Brits living here, or who have second homes, most supermarkets have a UK section. Here you’ll be able to find Marmite, Wall’s sausages, baked beans, Branston pickle, Bird’s custard powder, Cadbury’s Dairy Milk etc etc However, I have no need to buy any of these products. Indeed, I never bought them when I lived in the UK.

No, I miss watching live Premiership football. Specifically, I miss watching my team: Aston Villa. I listen to their matches on the internet and watch them on satellite TV. But any sports fan will tell you, there’s no substitute for watching a live match, race, game, whatever. If you were to ask me to describe my perfect day it would most definitely include watching my team win LIVE.

Because this blog is largely about cycling, you might be forgiven for thinking it was my first love. But no, that’s football. My maternal grandfather was a Villa fan. My mother grew up a stone’s throw away from the ground. My father moved from Portsmouth to play for Villa’s youth squad. If you cut my arm off my blood would run “claret and blue”. My first date with my husband was a football match, which Villa won. He often jokes that when he married me he promised to “love, honour, obey and support Aston Villa”.

We were for many years Villa season ticket holders and we travelled all over the country watching them play, home and away. I now have a season ticket for my local team, OGC Nice, but I can’t work up quite the same passion and enthusiasm as I do for the Villains. You might be wondering what has occasioned this outpouring. It’s simple: today, it was confirmed that Gareth Barry has played his last match for Villa. He’s moving to Manchester City; coincidentally, the subject of one of my favourite sporting books “Manchester United Ruined my Life” by Colin Schindler.

After 12 years of faithful service, Gareth is moving on and taking a bit of me with him. He’s not my favourite player ever, that’s Paul McGrath for whom the famous violinist Nigel Kennedy (yes, him of Four Season’s fame), penned “God is Paul McGrath”.  He’s not even a local, he was signed as a youth player from Brighton but he’s played 440 games in a Villa shirt and, as is right and proper, he’s (at long last – well done, Capello) regularly donning an England shirt. I wish him well and every success at Man City, but obviously not at the Villa’s expense.

Unfortunately, when you’re trying to break into the Big Four (Manchester United, Liverpool, Arsenal and Chelsea) and fail, you run the risk that all those players you’ve so cannily bought and/or developed will be cherry picked by those clubs with bigger wallets and/or more (recent) trophies in the cabinet.

← Friends along the way
Bring me sunshine →

2 Comments on “Farewell to Gareth Barry”