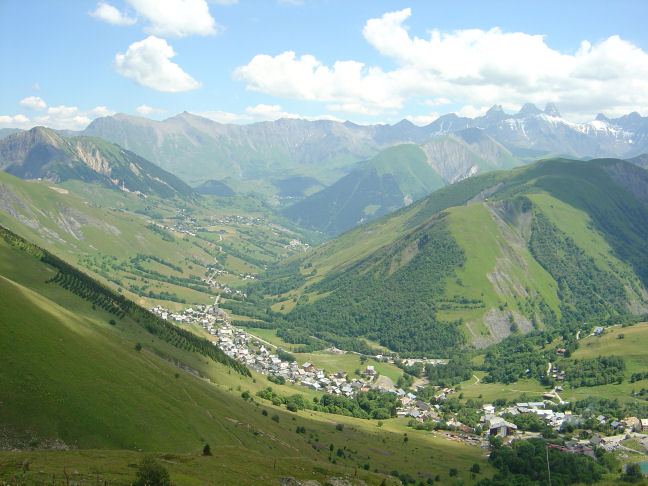 Two days in the Hautes-Alpes and my allergies have flared up again with a vengeance. I’m not sure exactly what is causing me to wheeze like an asthmatic grandma but clearly there’s more of it in the hills than on the coast.

Despite the hacking cough, sore throat and watery, pink eyes, I had an enjoyable time tackling some of those legendary cols around Briançon, watching a couple of stages of the Critérium du Dauphiné liberé and catching up with friends. I was staying in the same hotel as the team from Française des Jeux who must have been pleased at Christophe Le Mevel’s 10th place on GC and Sébastien Joly’s 3rd place on the final stage.

While this is not my first trip to Briançon, it was my first opportunity to tackle the Galibier and Izoard. Previous trips had been spent riding shotgun for my husband while he trained for L’Etape du Tour 2006 (Gap to L’Alpe d’Huez): successful completion of which netted Euros 80,000 in goods and cash for charity.

When we first moved to France in search of a different pace of life my beloved had hoped to improve his backhand slice and golf handicap. In reality, running a global business means being available 24/7. So when he did have the odd hour or two, he would hop on his bike and ride. Sensing he needed more of a challenge than a 35km round trip to Antibes and back, I applied, on his behalf, for a place at L’Etape du Tour. This is generally the most difficult stage from that year’s Tour de France, run on closed roads for 7,500 amateur cyclists. I confess at the time I didn’t fully appreciate the enormity of the challenge, and, more fortunately, neither did he.

Bearing in mind his travel and work commitments, I spent hours on the internet looking for the best kit, the most suitable bike and put together a training and nutrition plan, which I heavily policed. I masterminded his fund raising and wrote articles on his endeavours for the trade press. He joined a local bike club doing as many club rides and events as possible. His first trial run was scheduled for early May and we stayed in Briançon, in the same hotel we had booked for the L’Etape.

Over the long week end Richard covered a significant part of the parcours, climbing both L’Alpe d’Huez and the Col du Lauteret. The Col d’Izoard was still impassable but he did cycle up it as far as possible. This gave him enormous confidence that with a further 10 weeks’ of training he would be able to complete the parcours within the allotted time.

I drove back from Briançon looking like a rabbit with myxomatosis and only after 48 hours at home my symptoms have subsided a little. Regrettably, I had to banish all thoughts of the Cimes du Mercantour and only now am I reflecting on a disappointing month of training. However, I do need to get rid of the congestion to get my training back on track and to that end I have been dosing myself on Vicks Vapour Rub, an old favourite, and some cough medicine from the Pharmacy which tastes no where near as good as Benylin. I could easily have become addicted to that stuff and used to swig it straight from the bottle, no spoon required.

My next goal is the club organised circuit race in early August. I took part last year and was lapped 3 times on the 9km circuit. The ladies, all three of us, raced with the Grand Sportifs (men over 55). Fellow club members advised me to stay in the bunch and in my big bracket. I would have been happy to comply but they raced away from me at the start, up the hill and that was the last I saw of them until they lapped me again and again and again.

← Friends together again
Into the box →