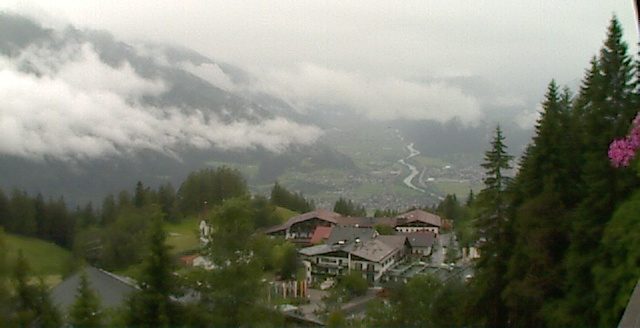 Sunday was the final day of our vacation and it was still raining, or should I say pouring. Undeterred by the climatic conditions, we have however had a most enjoyable vacation. Most days we have waited for a lull in the precipitation before venturing forth on our bikes, muffled up like Michelin men in rain jackets, leg and arm warmers. It’s warmed up as the week has progressed, although the surrounding mountains still have a dusting of snow.

During the week, we have ascended and descended all the surrounding hills, several times, most of which are an average 10% gradient.  I foolishly made the mistake of buying my husband a book on rides in the surrounding area enabling him to seek out the highest climbs. However, we have also ridden along the valley visiting some of the villages perched part-way up the hills.

Now, we’ve seen plenty of cyclists out and about in the valley but, surprisingly, have not passed any, or indeed been passed by any on the climbs. Slogging back up one of these from the valley on Thursday, I was delighted when it levelled out at 7%. Yes, I know I can’t believe I even entertained that thought, but I did. Of course, it’s been great training as most of the climbs near us are only 7% average gradient.

I have a routine when cycling with my beloved. I always carry the cash, the mobile and the keys. I reckon that the combination acts as a powerful disincentive for my husband to misplace me. Equally, I don’t trust him not to lose any one of them should I be foolish enough to entrust him with them. History greatly supports my fears.

Nonetheless, my beloved managed to lose me on Friday in nearby Mittenwald. I searched all over for him, without success and as soon as the heavens opened (once again) I headed back. It was cold and wet and, having climbed back up to the valley, I time-trialled home while passing cars regarded me with considerable disbelief.  My husband trailled in over an hour later looking (or so I like to think), a bit sheepish.

I am of course questioning why on earth did we decide to have a cycling holiday in Austria? Why did we not stay at home and enjoy the warm, sunny weather so ideal for cycling? The answer is my beloved. If he takes vacation and stays at home he keep straying into the office to answer a few emails or answer the phone and several hours later he’s still in there. From time to time, I need to ensure that he has a complete break. Conversely, my holiday starts when he heads off on a business trip. Roll on Monday!