A brave baker’s dozen set out from the club’s rendez vous point this morning. The sky was leaden and it was cold, damp, still wet under foot from the storms the night before and the hills behind were now dusted with snow. We rode briskly to keep warm each trying to take shelter from the chilly headwind which surely must have originated in Siberia. I rode at the head of the peloton, sheltering behind club mates half my size is pretty pointless.  Other cyclist’s were rarer than hen’s teeth. 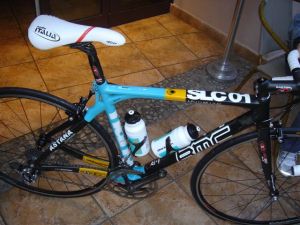 At the pointage in Golfe Juan, I felt chilled and decided to return home. While riding, I’d paid particular attention to my posture and there was no re-occurrence of my earlier troubles. Sadly, I may have to replace my saddle. I cannot get another of the same model as it’s one that’s only made available to the pros. It’ll have to be a Bontrager, the same as I have on my Orbea, but in white to match my bar tape.

I picked up the newspapers on the way home and was glad of the additional warmth as I stuffed them down my winter jacket. I wanted to get home, and finish off the tidying up in time to watch Arsenal v Liverpool. If Arsenal lose, AVFC stay in 3rd place. I’d been so buoyed up by the boys’ win that I’d forgotten to check on how OGCN had fared away at Lens: badly. We lost 2-0, our 3rd consecutive loss. Christmas can’t come soon enough for Les Aiglons.

Journalists have been attending the camps of Astana and Team RadioShack, respectively in Pisa and Tucson, and attempting to keep the Lance v Bert rivalry stoked.  The latter is wisely not rising to the bait. Yes, Lance on paper your team has by far the stronger riders but do you have the stronger team? This story is going to run and run until its conclusion on the Champs Elysees next July. We’re just going to have to wait and see.