I have read various reports that Cervelo Test Team’s kit was the best-selling and most popular of the season. It’s hard for me to comment. Round here most wear their club kit, all the time. There’s very good reasons for this. Generally, one wears club kit when riding with one’s club. Also it’s the cheapest kit you can buy. It’s either sold at cost or at a subsidised price if, like us, you’re lucky to have plenty of sponsorship. For example, we pay only Euros 27,50 for a short sleeved cycling top with a full-length zip. Probably, the next most popular brand is Bwin, very reasonably priced kit made by Decathlon. Sightings of premium brands such as Assos or Rapha are rare.

While you do see people sporting pro kit it’s either because they are pros, they live next door to a pro (and it’s a freebie) or they won the kit in one of the many club tombolas. No local sportif or randonée would be complete without either a goody bag or tombola. As a consequence, hands down, the most oft-sighted kit here is that of Astana. I suspect that this is what may have led Lance to conclude he was now more popular with the French when he was staying in Beaulieu-sur-Mer earlier this year. 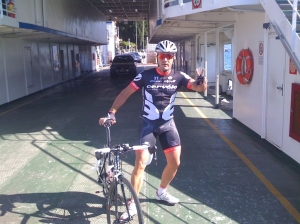 Aesthetically, the Cervelo kit benefits from its paucity of sponsors and simple colour palette. My Swiss friend is a big fan of their kit. He has both versions, here he is in the black one. He’s not a member of a cycling club, rather he rides with a group of like-minded friends who also acquired both versions of the Cervelo kit. Coincidentally, he lives in the town where Assos is based but possesses not a single item of their range. This is a man with a seriously extensive cycling wardrobe.  I should know, I have seen it.