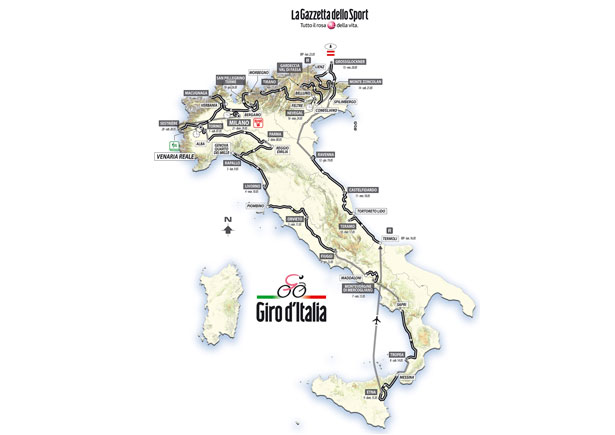 Next up it’s the Giro which starts on Saturday. Last year’s version was an absorbing contest played out in dreadful climatic conditions. This year, Italy’s grand tour, with its 40 major climbs and 8 summit finishes, will celebrate the 150 years since Italy’s unification. The route has been described as a climber’s nirvana, so expect the winner to weigh substantially less than me. A mountainous parcours is bound to favour riders such as Alberto Contador. With Basso absent, the weight of Italian expectation will fall on Nibali’s young shoulders. Michele Scarponi, who triumphed in the Giro de Trentino, will also be among the fancied home-grown starters along with Italian champ Giovanni Visconti and former winner Stefano Garzelli. Also riding are former Grand Tour winners Menchov and Sastre, and riders with Tour pretensions such as Joaquim Rodriguez, Igor Anton and David Arroyo. One thing for sure, it’s going to be a fiercely contested and thrilling battle.

Leaving aside the favoured riders and teams which have been beautifully summarised in www.thearmchairsportsfan.com,  let’s look instead at the magnificent route and the challenges strewn along the way. The Giro starts in Turin with a 19.3km team time-trial which will favour well-drilled teams such as HTC-High Road, Liquigas, SaxoBank Sungard, Sky and Garmin-Cervelo. It’s likely that one of the sprinters will pull on the pink jersey for Sunday’s 242km ride from Alba to Parma which is one of the few flat stages this year. Sadly, there’ll be no time for truffle hunting or, indeed, any other gastronomic delights.

The next four days I would classify as moderately mountainous during which the GC contenders will be vigilant but discrete.

There’s the first summit finish on Stage 7, 100km from Maddoloni to Montevergine di Mercogliano,  the climb up Monte Taburno will tire the rider’s legs before the final 17km climb which could ensure a bit of a shake out among the favourites. Stage 8’s 214km to Tropea hugs the Tyrrhenian coastline and is perfect for a face off among the sprinters. In honour of the 1908 earthquake victims, Stage 9 is on Nibali’s home territory of Sicily and features two ascents of Mount Etna which the organisers are hoping will provide more than a few sparks. One would anticipate that Nibali will target this stage which might also land him the pink jersey.

After a well-earned rest day, the route heads back up north on Stage 10, 156km from Termoli to Teramo. In theory, it’s another day for the sprinters’ teams. The coastline can be windy, so the favourites will need to ensure that they’re not distanced by breaks in the peloton. Stage 11 features what many feel will be a key battleground with its many peaks providing scope for attacks, particularly among the GC contenders. The 160km stage from Tortoreto Lido inland to Castelfidardo never goes over more than 600m but it’s a day of tiring, leg sapping, constant ups and downs. On the following day, Stage 12’s pan flat 171kms from Castelfidardo to Ravenna hugs the coastline and has sprint finish written all over it.

Stage 13’s 159km, which finishes at 1,908m atop Austria’s Grossglockner, is pretty much uphill, all day, all the way. First up is the Passo di Monte Croce Carnico at 1,336m, followed by  two further climbs, before the final grind up to the finish. But this is just a taster of what’s to come the following day: Stage 14’s 210km from Lienz to the top of Monte Zoncolan features five tough climbs, by way of 1,982m Monte Crostis, which averages 9% for 15km.  Finally, the main dish of the day on Stage 15, 230km from Conegliano to Val di Fassa, again features five climbs including the Passo Giau at 2,236m but it’s the final 15km on gravel roads to the finish which could prove decisive. Could the overall winner be decided here?

The boys take a well earned day’s break before the uphill time-trial. It’s only 12.7km  and starts with a 1.5km descent before ascending. The middle 4km averages 10% before ramping up to 14% as the road reaches the midway point at Tornante from whence it’s a steady grind to the top which flattens out for the last 2km. Stage 17 is this year’s longest at 246km from Feltre downhill to Sondrio taking in the Passo Tonale and Aprica. It’s unlikely that any of the GC contenders will venture out of the peloton on this stage. It’ll be perfect for a breakaway among those whose GC aspirations have long since evaporated.

Stage 18’s 147km from Morbbegna to San Pellegrino Terme crosses Italy’s cycling heartland which is home to many Italian and foreign riders. Again, it’s probably one for the breakaway artistes but the downhill finish could tempt one of the GC favourites. Stage 19 is yet another summit finish, this time the Macugnaga, 211kms from Bergamo by way of the Mottarone. There’s a fast descent before the final ascent which could be beguiling for those breakaway riders while the GC contenders keep their powder dry ahead of the penultimate stage: 242km from Verbania to Sestriere. Stage 20 is pretty flat for 200km before climbing up the Colle delle Finestre, dropping down 700km and then finishing at 2,035m in the ski station.  The ultimate stage is a 32.8km, simple out and back, flat individual time-trial around Milan.  It’s unlikely to be a decisive stage and will probably be won by someone other than a GC contender.

4 Comments on “Garibaldi’s Giro I”