Sometimes weeks just don’t pan out the way you’d hoped or planned. This has been one such week. Obligations have circumvented my desire to dip into my recent delivery of books and watch the live presentations of next year’s Giro and Tour routes. Instead, I have found myself reading everyone else’s views. So there’s not much left for me to add as others  have pondered at length the suitability of the routes for various riders and highlighted key stages which might influence the outcome of both races. However, while reading the summaries, a comment caught my attention where references were made to “red carpets” and “stylish attire”. Were we talking award ceremonies and lycra clad lovelies or was this about the parcours of a race? Possibly both. I decided to check out the photographic evidence.

First up, the Giro and, yes, the Italians are pretty snappy dressers. I was going to criticize Michele Scarponi for his rather 50s style casual outfit until I realised that Damiano Cunego was similarly clad. Obviously a team mandated outfit with both riders wishing they were wearing anything but. Clearly Jakob Fuglsang and Mark Cavendish, who both look to be squirming in their seats, appear woefully underdressed. And they’re not the only ones. There were a number of jean and sweatshirt clad riders. Unlike Alberto Contador, who it has to be said looks every inch a winner. 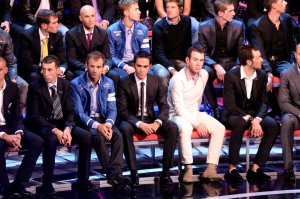 In mitigation, the boys don’t work in offices and spend their days either in lycra or their team’s idea of casual sporting wear. They probably have little call for formal wear apart from award ceremonies, weddings and the odd formal invitation. I think this is what probably explains the plethora of shiny and dark outfits. They’ve been bought to be worn at weddings where typically in Europe everyone wears, for want of  better words, evening or cocktail attire.

IMHO  occasions such as these presentations warrant at least a suit, or jacket and trousers. I appreciate the fashion for wearing suits with dress shirts and no ties, but dress shirts are meant to be worn with ties, so button downs, t-shirts or more casual shirts look rather better if you’re going tieless.  No, that’s not a nod towards Dan Martin’s v-necked t-shirt and trendy too small jacket. With their very slim physiques, the boys also probably find it difficult to buy well fitting, off the peg, outfits. Looking at a few of them in shots where they were standing, I was itching to whip out my box of pins and take up a few of the overlong trouser legs. Me, a woman who has been known to take buttons to the repairers to be put back on to garments.

Things don’t necessarily improve when they retire. Here’s  some blasts from the past with Hushovd and Ballan. To be fair, on the few occasions I’ve encountered Super Mario, he’s been impeccably turned out but here he looks to be wearing a jacket from his foray into the Italian version of “Strictly Come Dancing”. Still he and Gianni Bugno are both wearing ties while Paolo Bettini, at clearly a little over his fighting weight, is wearing an incredibly shiny suit.

Next, our attention turns to the Tour Presentation where Yannick Noah, former darling of the French clay courts, was roped in to assist because, I asssume, of his connection to Le Coq Sportif who henceforth will be providing the yellow jersey. Yannick looking suitably laid back next to an (what else) impeccably attired Badger.

Most of the boys seemed to sharpen their act for the Tour, although Cav remained resolutely casually dressed. A number of the boys had problems knotting their ties but, as they were probably travelling without their wives (and wardrobe moderators) this can be overlooked. Current and former Tour champions easily won the best turned out competition with the Olympic champion running them close.

One of my girlfriends wisely advises “dress for the job you want, not the job you’ve got!” She’s a Harvard alumni who lectures widely on leadership and has a high profile career in property development. As I looked at this photo, her phrase sprang to mind. What do those boys want to do next?

← Bookworm
Dicing with danger at every turn →