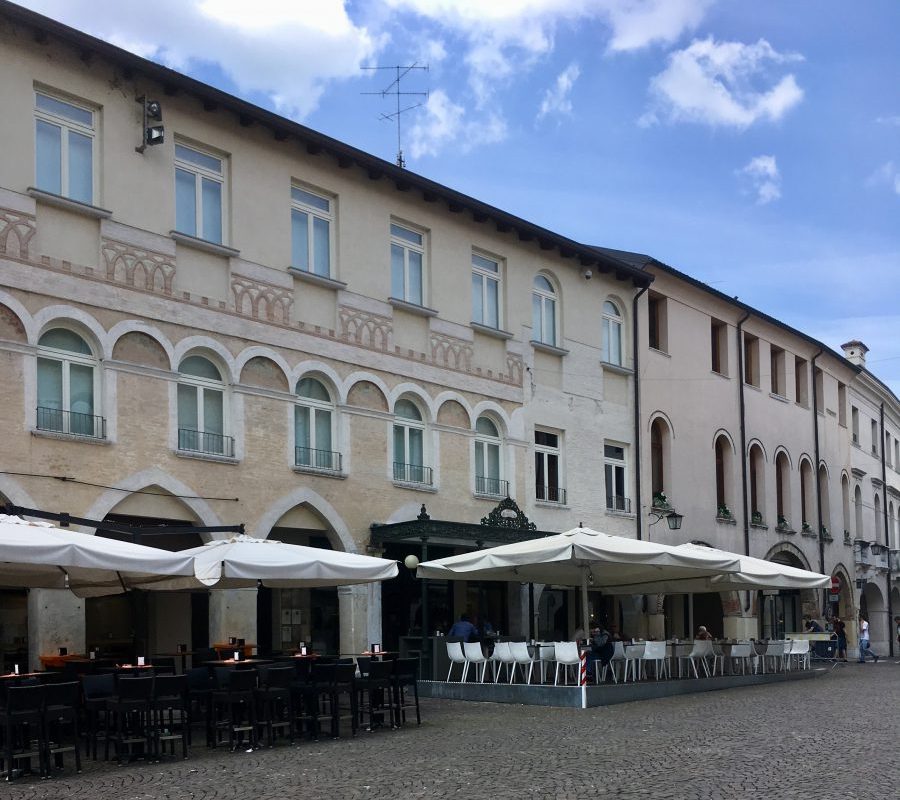 It’s May, I should’ve been watching the Giro d’Italia so here’s another blast from the past (May 2013) where we happily managed to combine business, a spot of vacation and watching cycling in NE Italy.

I know, I know I’ve been back a few days but oft cited pressure of work and my beloved’s accident has delayed its completion. Fortunately my beloved has a client in NE Italy, the location of a number of stages in this year’s Giro d’Italia. I do from time to time go with him on business trips and this one was no exception. It’s also a beautiful part of the world steeped in history, with gorgeous countryside – ideal for cycling – and it’s ringed by the Dolomites, equally good for cycling and skiing.

After a pleasant drive over on Sunday afternoon, I spent most of Monday getting to know the area better by bike. Over the past few years, since I’ve taken up cycling as a hobby, the bike has taken me to many lovely spots which I’d have been unlikely to visit in the car. I like nothing better than heading off for a day in the saddle, revelling in the warm spring weather and investigating small towns and villages en route. I rode around here last July and now have a good idea in my head of the layout of the surrounding area and, as it’s well sign-posted, I’m most unlikely to get lost.

My husband’s clients have been very hospitable and only to happy to entertain us in various restaurants most evenings, you can’t beat local knowledge. But Italy’s the one place where I have never, ever had a bad meal or a even a bad cup of coffee. I used to say that about France but we have had one or two disastrous meals when we’ve been out cycling.

The advantage of a week in Italy is the effect it’s had on my spoken Italian. I don’t speak it often enough so a week of reading La Gazzetta dello Sport, watching RAI Sport and chatting in Italian brings it all flooding back. My beloved is making an effort to speak Italian though confuses it with Spanish with humorous results. However, we were both tasked with conversing in Italian when the client’s parents, who both only speak Italian, took us out one evening for dinner and a tour of the area. Amazingly, we had a most interesting evening and have learnt much about the area, particularly its history and viticulture.

The three days of the Giro d’Italia were planned with precision so that I could both see the start and finish each day. All went according to plan on the first two days. I happily snapped away with my beloved’s camera and I also managed to chat to a few of the riders to contribute to my article for VeloVoices.

On the last day, after three days of glorious sunshine, the heavens opened and the rain cascaded down. That, and high winds, made driving to the start quite perilous but it was ultimately a doomed effort as they’d closed the road well ahead of the departure time and Italy’s finest couldn’t be persuaded to let me through despite the proper credentials. Of course, it may have been that they were clearing rubble swept onto the road by the rain. I’ll never know. Feeling chilled to the bone, I drove directly to the finish to take shelter and warm up in the press room.

But my Giro adventure’s not yet over. A client meeting in Milan on Monday morning has paved the way for a trip to Brescia on Sunday to watch the final day.

One thought on “Postcard from Pordenone”