Postcards from Not Too Far Away

In recent weeks, I’ve gotten to visit a few places I’ve been meaning to visit for some time. It’s not exactly a bucket list; I’m far too young for one of those! At the end of June, thanks to an invitation to a dental meeting, I finally got to visit Turin. This is a town we’ve driven around on numerous occasions. I had a trip planned back in 2012 to watch the start of the Giro which I cancelled at the last moment – pressure of work. I even passed close by when I was at this year’s Giro in early May.

So, finally I get not only an opportunity to visit but time to look around. Our hosts had organised a bus tour of the city and it’s truly delightful. Well worth a visit just to marvel at its splendid architecture but I would counsel against visiting in the height of summer. It’s hot, humid and the mosquitos have fearsome bites, as my legs will attest. After a delightful dinner at a restaurant on the river, I looked like someone with a severe case of the pox, despite a liberal application of deterrent. So, I’ll be returning again to Turin to visit its museums and splendid buildings when those pesky blighters have gone into hibernation.

Last week, during the third week of the Tour, I finally visited Carcassonne. Again, another town I’ve driven past on the motorway many times. On the last occasion, in early April, fog made the place look like something out of Disney. Sadly, despite being a UNESCO World Heritage site, the place is stuffed full of shops selling tourist tat and restaurants offering Cassoulet. The castle itself is a wonder to behold but the plethora of tourist coach trippers make it difficult to appreciate let alone look at the old buildings within its walls. Possibly, another one to visit in cooler climes. The villages surrounding Carcassonne are charming but there’s a wind that blows all the time in the Aude and which would really get on my nerves were we to spend more than a couple of days there.

After Carcassonne, we moved onto the Pyrenees and a delightful spot called Figarol which my beloved was much taken with. It’s very beautiful and out-of-the-way but – there’s often a but – with so few restaurants and amenities nearby, we found ourselves eating in the same place on a couple of occasions. The country’s fine for a day or two and then I find it’s scenic attractions (and flies) pall. I’m a city gal at heart.

While at the Tour last year, I visited Albi and Castres – both deserving of a trip – and stayed in a hotel in Najac, about a 45 minute drive from Albi. It was delightfully bucolic with some nearby walled towns such as Cordes en Ciel that are well worth a potter around.

As I discovered to my cost on the bike, the terrain is rather more undulating than I had remembered. My beloved and I have recently introduced a new system whereby we set off together and agree a rendezvous point, generally a watering hole but, in between, we’re free to cycle at will. This saves him having to huff and puff while waiting for me. 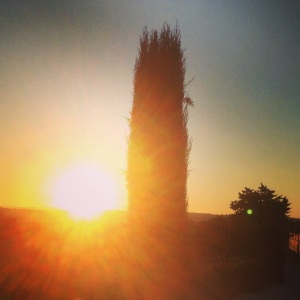 En route for home, we stopped off in the Luberon and rode along some familiar routes beside the vineyards in the hot sunshine. I made the serious (rookie) mistake of not booking somewhere for dinner and after countless trips into restaurants to enquire if they had a table for two, we had to settle for a little pizza place round the corner from where we were staying. A place, I hasten to add, we normally wouldn’t have considered. But regular readers will know that my beloved will die if he doesn’t have at least three square meals a day!

I don’t consider myself a big fan of pizzas and I always have a Margarita. I know, predictable and boring. But, this was the best pizza I have ever eaten! It had a wafer thin base, a delicious herb and tomato topping, with just enough cheese. It had been cooked in a wood-fired oven – I so want one of those – but the edges weren’t burnt. We also had a bottle of their finest red which was easily the best wine of the entire trip. So all’s well that ends well!

We’ve only been home for a few days but we’re off again tomorrow, this time to my beloved Basque country, sadly sans velo and with our wet weather gear. Yes, a spot of rain is forecast.

← Well, what do you know!
Another postcard from the Basque country →

3 Comments on “Postcards from Not Too Far Away”