Postcards from Ponferrada I

One week into our almost three-week vacation, how am I faring? I confess that a week of sharing a bathroom with my beloved is stressful but plenty of exercise and fresh air has meant I’ve slept for well over nine hours per night and am feeling positively chilled.

It’s just what I needed after a hectic run-up to the holiday. Ideally I like to completely clear the decks the day before any vacation so that I have enough time to do all the washing, ironing and packing, ticking off my various lists as I go. Despite hiring a Renault Kangoo for the trip, which easily takes the bikes, our luggage and the kitchen sink, I like to travel as lightly as possible. My beloved, on the other hand, likes to cater for every potential occasion. If we’re travelling for 15 days, then he needs 15 of everything!

This time I had a day long business trip to Amsterdam on the Monday followed by an entire day spent editing. By the time I collected my beloved from the airport on Tuesday evening, I was too tired to even start thinking about preparing for our holiday. Instead I got up really early and did it all the following morning.

We had a great drive down to the Basque country and arrived just as the heavens opened at what our Garmin GPS and Michelin route planner insisted was our hotel. It wasn’t! Unfortunately neither the owner of the hotel nor some English guests could explain exactly how to reach it. They kept telling us to take the left-hand turn out of Getaria but they should have said “after” Getaria. Our hotel was at the other end of a very long road which snakes around the headland and is now partly impassable other than on foot. So the road has two properties numbered “4” and we were at the other one.

We did eventually find it and, despite not having a dinner booking, they managed to rustle up a meal for us. Which was nice as it was our wedding anniversary. To be honest, I’d thought it was the day before which is what happens when you’ve been married as long as we have! We slept well thanks to a good bottle of red wine and exhaustion, awaking to sunshine and glorious coastal views.

Fortified by a hearty breakfast, we headed along the coast to Asturias but not before a sighting of Haimar Zubeldia, out for a morning training ride. We laughed because there were all those jokes on Twitter during the Tour (de France) about whether anyone had seen him. He seems to achieve top ten placings in most races from beneath the radar and here he was. To be fair he does live in the town just up the road.

We were keen to further explore the Cantabrian coastline having previously visited Noja, a start town in the 2011 Vuelta a Espana. It lived up to expectations, apart from the stretch between Santander and Torrelevaga – far too industrial. But our overnight destination was near the Asturian coastline. The entire area is a very green and pleasant land with lush green grazing for its cattle and apples trees aplenty. I don’t think I’ve ever seen so many. The air is perfumed with the sweet smell of drying apples.

We spent a couple of days in Gijon in a stately home, now a hotel, parts of which date back to the 17th century, which has been in the same family since 1850. It was a bit like stepping back in time and delightfully restful. Just what the doctor ordered. 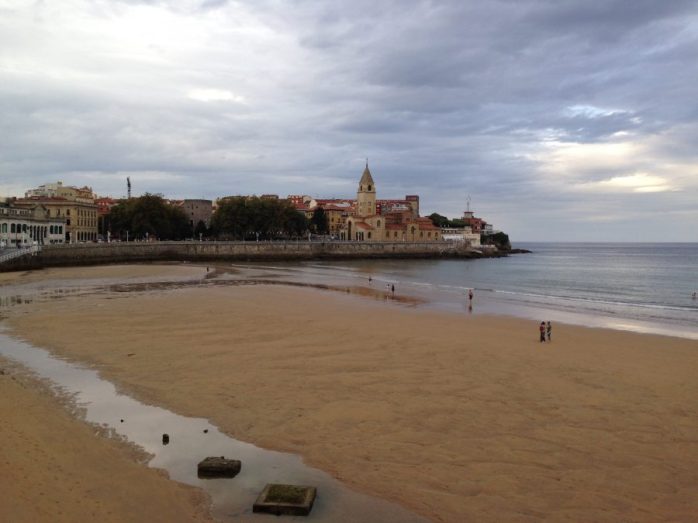 Have bike, will ride. The roads of Asturias are practically car free. I joked on Twitter that we were giving Lagos de Covadonga a miss but still managed plenty of climbing. The roads are undulating, not perhaps as steep as the Basque country, but steep enough. I was disappointed not to have a sighting of Samu (professional rider Samuel Sanchez who lives in Oviedo) though I did keep my eyes peeled for a tell-tale flash of red and black with gold highlights.

After a relaxing two days in Asturias, we set off for Ponferrada on the motorway. The vista was very different to Asturias, clearly showing the area’s heritage to be one of opencast mining. The first of our challenges in Ponferrada was to find the ticket office. Our GPS once more fell on stony ground but clearly we weren’t the only people experiencing difficulties as the organisers sent us a series of emails concluding with one with a map. The road to the ticket office, a portakabin parked in the middle of nowhere, was blocked but we soon circumnavigated that hurdle and got our tickets..

We then headed to our hotel on the Camino de Santiago. I’ll be honest; it’s not a challenge that holds any appeal. Even less so now that I’ve more time to fully appreciate the enormity of the challenge. Our casa rural and home for the next nine days is in one of the small villages part-way between Astorga and Ponferrada with six delightful rooms, run by a mother and daughter team. After a delicious home-cooked meal, courtesy of Mum, we happily retired to our spacious bedroom and were soon fast asleep.

The following morning we were up early for a post breakfast ride. We saw five cars, hordes of walkers and 24 cyclists, eight of whom belonged to national squads. The terrain was undulating, the vista vaguely Scottish and you could see for miles. I was also grateful I’d packed my ¾ bib tights and arm warmers! Yes, it’s a wee bit chilly first thing.

The outlook for the first few days of racing was mixed. I’d bought tickets to the uncovered grandstand and as per usual, volunteers outnumbered spectators by a factor of ten to one. Fortunately, our more mature volunteers saw sense and let in a crowd of people otherwise the camera shot of the finish would have featured empty stands.

We’ve now had two days of rain and the outlook for the next few is more favourable so we’ll be back out on the bike. I noted that the British elite women didn’t field a competitor in the individual time-trial. I’d have been happy to oblige if only they’d given me a call. The races have thus far been dominated by the Americans, the Germans and the Australians.

I confess that most of the attraction in coming to the Worlds is watching riders I normally don’t get to see, such as the women and the young guys and gals – stars of the future. I also visit places I’d never normally think of visiting. For example, just down the road is Astorga which dates back to Roman times, has a castle designed by Gaudi and is renowned for its chocolate. I’ve been round the castle but have yet to indulge in some chocolate.

← Just around the corner
Postcards from Ponferrada II →