Here on the Cote d’Azur, we’ve been enjoying the warmest October since 1943. October’s usually when I swap over to my winter training bike and into my 3/4 thermal bib shorts but, despite this being the first official week-end of winter, I’m still in shorts and short-sleeved jersey with a lightweight gilet. I like to think this is recompense for the wet winter or maybe the so, so summer. Either way, it’s glorious cycling weather and I have been at pains to profit from it.

With a number of projects (finally) put to bed and the professional cycling scene enjoying its off-season, I’m finally getting back into the groove and steadily logging the much-needed kilometres.  When you’re busy, it’s all too easy to procrastinate but boy do I miss being outdoors, feeling the wind in my helmet and the sun on my face. 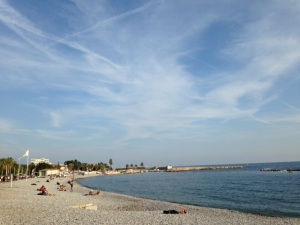 While temperatures are still delightfully mild, it’s a wee bit chilly first thing. No problem, as I prefer to head out after 10:30. With any luck, I’ll also be re-introducing my long mid-week ride on a Wednesday to compliment those on the week-end. Of course, everyone is out enjoying the fine weather, particularly the kids as half-term’s over and it’s back to school tomorrow. Large numbers are sunning themselves on the beaches and still swimming in the sea. One year, I was still swimming in the sea each day until well into November. If you swim each day, the drop in temperature is gradual and much less noticeable.

It’s the Nice to Cannes marathon next Sunday so we passed plenty of runners. Well, it would be too embarrassing to be passed by a runner wouldn’t it? We’re slow but not that slow. I like to think we were taking our time and savouring the weather. All the more so as rain is forecast for next week. No ride with my cycling buddy would be complete without a coffee stop. Again, we pick those restaurants with terraces in the sunshine and nice facilities. 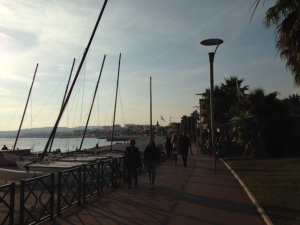 Particularly on Sunday, I endeavour to leave Sunday lunch cooking or maybe gently reheating in the oven so that all I have to do on my return is lay the table. I usually get back just before my beloved who’s started riding each Sunday with his local bike shop team. The pace has dropped right off on the Sunday club rides as the average age of club members has soared and he’s been finding it way too slow.

After Sunday lunch we take a stroll along the seafront to better enjoy  the fine weather before returning home for The Big Match, my beloved boys in claret and blue v Spurs. The boys haven’t scored in five matches and are sliding down the Premiership – not good. On a recent trip to London, I treated myself to some fleecy jimjams. They’re far too warm to sleep in but just perfect for post-ride lounging around the flat, which is what I’m now doing. Sunday’s don’t get any better than this.

Postscript: Actually, it would’ve been a lot better if Spurs hadn’t beaten AVFC 2-1

← Stick to your knitting
Monsoon →