All too soon, we were on the final lap of our vacation. The time had just flown past. We chilled at a Vineyard Spa hotel in the Yarra Valley where the roads were quiet, albeit undulating, which afforded us plenty of opportunities to explore the nearby towns on two wheels. As before in Adelaide, we watched the cycling, this time the Jayco Herald Sun Tour, two stages of which started close to where we were staying.

Once more, we self-catered for some meals and ate out for others, usually lunches at neighbouring vineyards and cafes. Most evenings we enjoyed watching the wildlife, mainly rabbits and the odd kangaroo, from our balcony, glass of local wine or beer in hand for my beloved and sparkling water for me. All very relaxing after a busy couple of weeks travelling.

My beloved has been taste testing the local baked goods, particularly pies, scones and hot-cross buns from the many local bakeries. Sadly and very enviously, I’ve had to rely on his reporting of the tastiest pie, the lightest scone and the spiciest bun. British firm Greggs would have no chance in Australia as there’s so many excellent local, family-run bakeries. And so many cafes offer “cream teas” you could be forgiven for thinking you were in Devon, if it were not for the countryside and its miles and miles of vineyards. 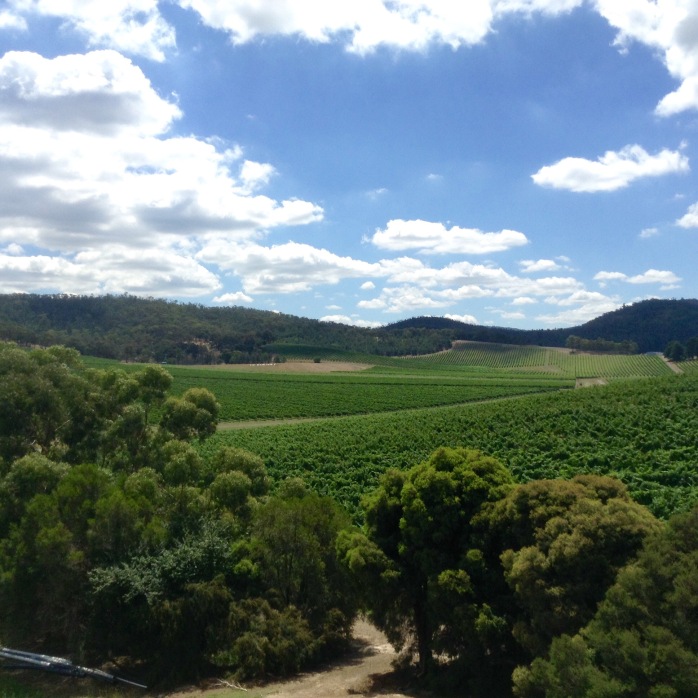 We found another excellent “local” in the next town which served its own craft beers, local wines with a small but excellent lunch and dinner menu. A number of breakfasts and lunches were also enjoyed at a nearby family-run organic café. In truth, we’ve been spoilt for choice and I’ve never been so well catered for on my new regime.

We also renewed our acquaintance with central Melbourne visiting both the Southbank – site of the Tour’s prologue – and the art gallery, where they staged the press conference.

The Tour’s last two stages gave us an opportunity to re-visit and better explore the Mornington Peninsula and Gippsland, two locations we’d much enjoyed on our initial leg from Melbourne to Sydney, where the roads and undulating landscape are perfect for cycling. Allegedly, Sky’s Chris Froome plans to spend January 2017 training in the Mornington Peninsula.

We’ve much enjoyed watching the wildlife, particularly the colourful birds despite their early morning raucous cries. Finally, I met my first koala on the road to Inverloch. He was casually sauntering across the road, we stopped to let him pass but he scampered off before I could take his photo – obviously paparazzi averse. They have very appealing faces and are surprisingly large, with thick fur and sharp claws – all the better to climb trees. The following day, we saw another koala but sadly this one had met an untimely end. I made my beloved stop the car to check, but riga mortis had already set in.

You may recall I had three back massages in as many days at the start of our trip and then none for the next four weeks. My neck and shoulders were feeling stiff from all the riding and my frozen right shoulder had gotten worse. I know; I’m falling apart. While my beloved had his hair cut, I popped into a nearby Thai massage shop for a neck and shoulder massage. This tiny Thai woman, with hands of steel, administered 20 minutes of exquisite torture but I now felt so much better. I topped this off with another chair massage on the flight home.

We’ve never before taken such a long holiday but the time has flown. I’m now looking forward to going through and cataloguing all of my beloved’s photographs and discussing (and blogging further about) the best bits!