My beloved has finally downloaded all his photographs from our recent trip to Dropbox, meaning I can finally choose my favourites! I confess this was a difficult task and it took me a while to whittle down the chosen few.

1. Agapanthus in the De Bortoli Gardens

We ate in the restaurant on our trip last year, when we were staying nearby in the Yarra Valley,  and returned again this year with our friends. The countryside is heavenly and the vineyard’s gardens are lovely and you can picnic in the grounds, washed down with a bottle of their finest. However, the photo is about the flowers, not the location. Great clouds of Agapanthus are everywhere during the Australian summer, in gardens, growing wild on the side of the road. I was assured by some of our hosts that they’re easy to grow. I like the plants but my late mother loved them. It’s a great shame we didn’t have the opportunity to travel to Australia with my late parents. Mother would have known all the names of the flora and fauna. Of course, she’d have done a spot of research beforehand, but we’d have benefitted from her sharing her knowledge with us. This is not my area of expertiseI tool tand the Agapanthus is one of the few flowers I can readily identify. 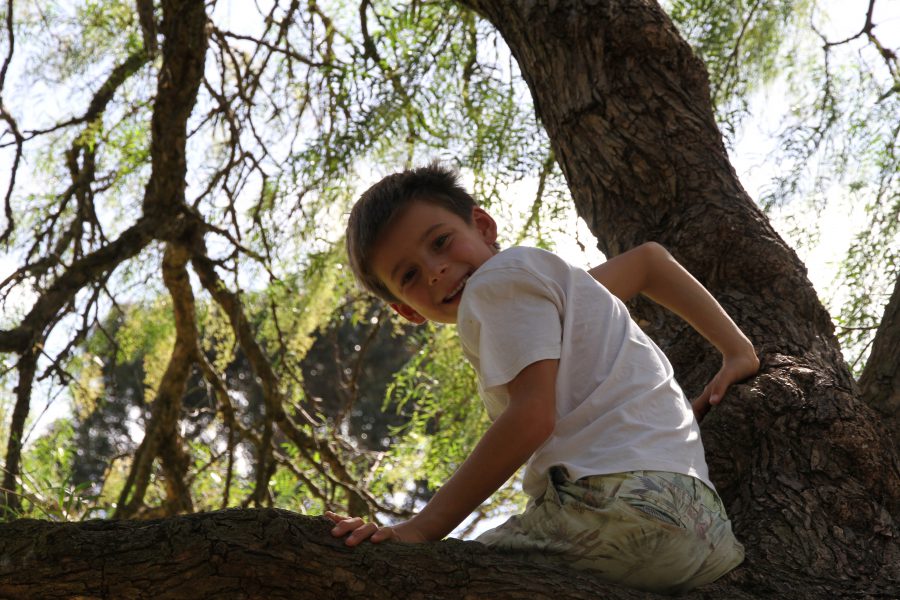 I took this photograph in the gardens of the Shadowfax Winery in Werribee, after we’d eaten with friends in the restaurant. This is their elder son who’s just turned eight. I have a huge soft spot for him, he’s a wonderfully energetic boy with a real aptitude for sport. He and his younger brother, who I also adore, pictured in 3. below had spent the morning at a wildlife sanctuary and, while we were enjoying lunch, the two played in sight in the restaurant’s gardens. Not all the vineyards have restaurants but those that do typically serve fantastic local produce, often grown alongside the vines. 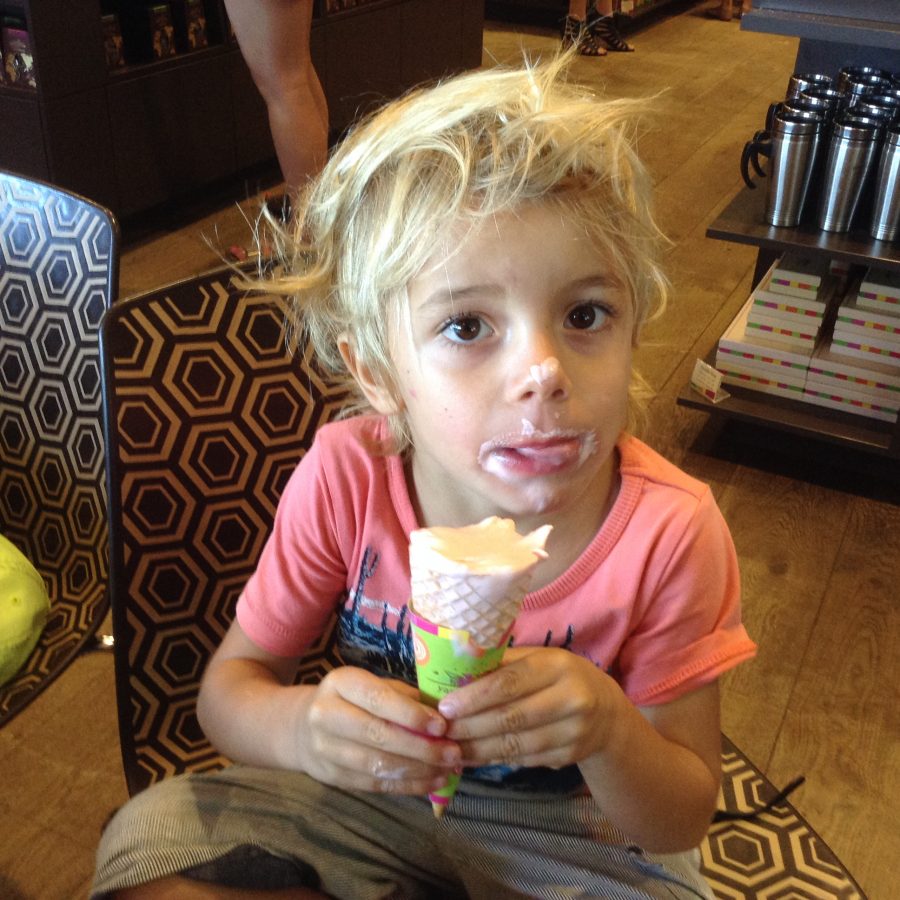 Here’s his younger brother getting strawberry – thank goodness it wasn’t chocolate – ice cream everywhere. Having lunched at De Bortoli in 1. above, we had promised the boys an ice cream at the nearby Chocolaterie and Ice Creamery. You can’t tell it from his photo, but the younger one is fearless, he’ll have a go at anything. The boys also sampled some of the chocolate as there are plenty of freebies to tempt you to buy. According to my beloved, the dairy produce in Australia is superb. I have to take his word for it as I can no longer partake of dairy. He particularly commends the ice cream, milk  and yoghurt. 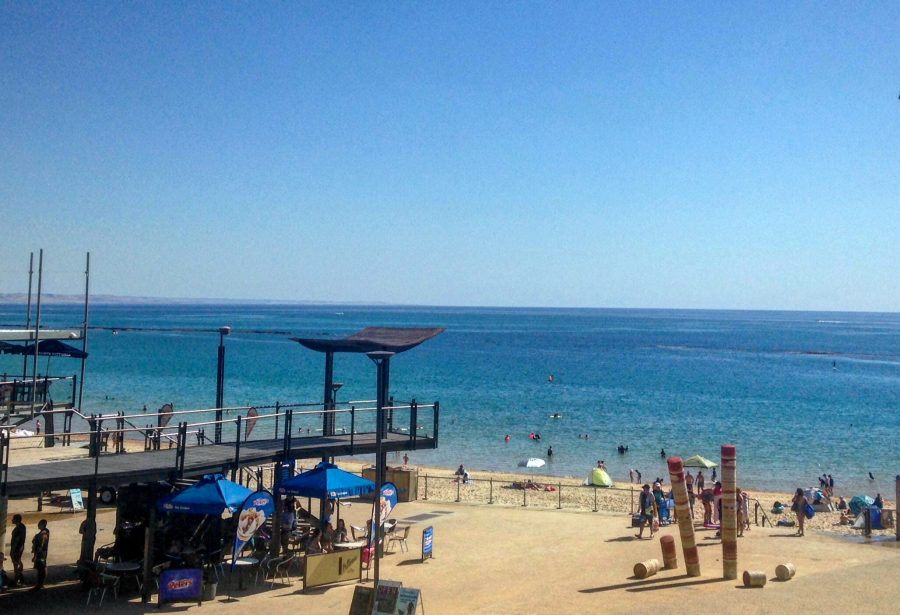 I took this photograph from the balcony of the hotel we stayed in for two days at Port Noalunga, in Onkaparinga, South Australia. It’s about 30km south of Adelaide CBD, formerly home to the Kaurna tribe, and is a popular holiday destination. I took this photo at the week-end which is why the beach is “busy.” I say that because so many of the beaches in Australia are deserted. This beach is a long expanse of golden sand with relative shallow water, ideal for kids to splash about in. We had a couple of strolls along the beach, just dipping our toes into the water. There were no shark sightings! 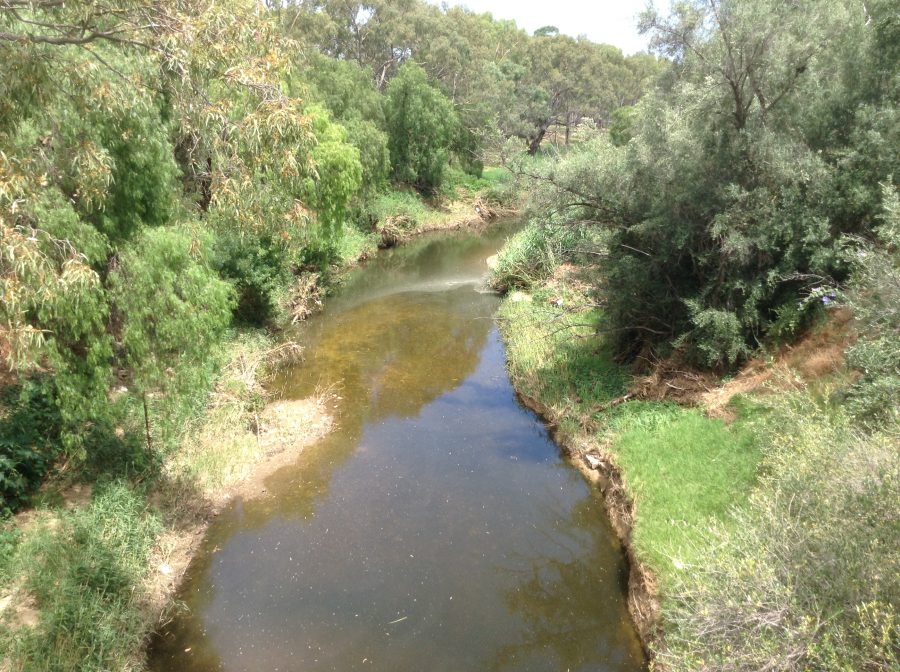 This park was alongside our hotel and provided a shady spot for me regular jogs. It’s in the affluent north-east suburb of Walkerville, 4km from Adelaide CBD. We stayed here last year too and found it an ideal spot, surrounded by shops and plenty of dining options, within walking distance to downtown Adelaide. The park, one of a number of green spaces, is a popular haunt but particularly for joggers.

My beloved loves cherries and having found a map of cherry farms in the Adelaide Hills, he went looking for one down this very long track. We never found it despite following signs for the farm so he had to settle for some from the market rather than straight off the tree. I love how the trees grow over the road, providing shade and shelter. You can well imagine that if the road weren’t regularly maintained, it would quickly revert to bush.

This time we watched a number of Twenty20 matches live at the Oval, HCG and MCG, as well as plenty on the television. We supported the Melbourne Renegades who narrowly missed out on the semi-finals but who nonetheless played some scintillating cricket. The Adelaide Oval has a capacity of over 50,000 and also hosts Aussie Rules football and rugby matches. It is reckoned to be one of the most picturesque cricket grounds n the world and is just a short stroll from Adelaide CBD.

Last year we spent a couple of days in Apollo Bay but this year we just stopped for lunch on our way from Portland to Birregurra. This was deliberate as we both wanted to return to its Fish Shack on the beach where we both agreed we’d eaten our finest fish & chips. This time around I was tempted by the thought of lobster until I saw how large it was – enough to feed the 5,000 and more besides! Instead I ate squid and my beloved ate whiting under the watchful gaze of the gulls. You can now see what I mean about empty beached. Although overcast, it was warm enough to sit out but there were only a handful of people wandering along its seashore.

Many of the beaches in Australia are bordered by sand dunes and vegetation so that you don’t see the beach from the road unless you’re looking down on it as you descent a hill. This was my first view of Seaford Beach where we spent the last leg of our vacation. It was formerly the Karrum Karrum swamp, a source of food for the Bunurong tribe. It was drained in the early 20th century, initially for farming. It lies 36kms south-east of Melbourne CBD and en route to the Mornington Peninsula. 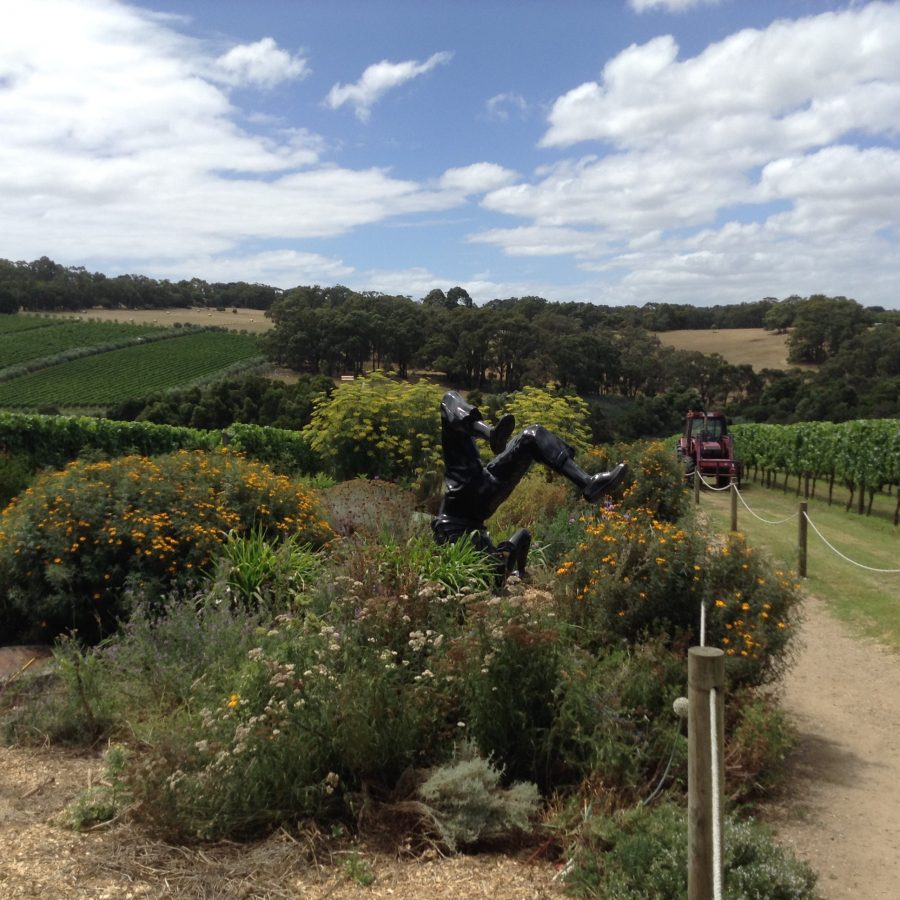 I know what you’re thinking – another vineyard! In truth we visited only a handful and never partook in any of the tastings. This was recommended by our friends and we ate a fabulous meal in the café, rather than its fine dining restaurant, before strolling around its sculpture gardenThis is presumably what happens if you imbibe too freely, you end up in the flower beds.

I’m a sucker for sunsets (and sunrises). This is the only photograph taken by my beloved that made the cut. Yep, all the others were taken by me on my mini iPad. I love the reflection of the jetty in the sea and the apricot coloured sky. We both took a load of photos on the beach at sunset but I thought this was the best one.

12. Yet another deserted beach

This is lightening Beach on the Southern Ocean side of Mornington Peninsula. It’s a beautiful area but as you can see from the surf, the water’s full of rip tides which makes it unsuitable for bathing.  I could have chosen photos from any number of beautiful beaches such as Safety, Shoreham, Flinders or Balnarring. There’s something very relaxing about watching water and I find the noise of crashing waves strangely soothing.

So, there you have them. My 12 favourite photographs from the trip which tend to be more about the memories from the day rather than the quality of the image.

13 thoughts on “My 12 favourite photographs from Australia”