Postcard from Sardinia: Part I

We spent last week on our maiden trip to Sardinia ostensibly to watch the first three stages of the 100th Giro d’Italia but also to see something of the island. We toyed with going by ferry but in the end plumped for direct flights from Milan and a hire car – quicker and cheaper.

I drove to Malpensa on Sunday evening where we stayed overnight in a delightful B&B with a magnificent garden and red-hot WiFi. We dined in the local town in a restaurant that greatly exceeded expectations. Luckily we were the first to arrive as it was packed with locals – a ringing endorsement – by the time we left. This got our holiday off to a real swing.

The following morning it was pouring down as I drove to Malpensa and our EasyJet flight to Alghero, on the north-west coast, which was hosting “The Big Depart”. Even before we’d left the airport to collect our chubby Fiat 500L, it was obvious the Giro was in town. We drove straight to our hotel on the outskirts of Alghero, nestling in the verdant countryside, dropped off the luggage and drove back into town for lunch. An octopus salad later – you know how I love my cephalopods – and we were ready for a walk around the charming old town.

By now the sun was out and it was starting to heat up but we were still huddled in our gilets on account of the brisk sea breeze. I was on the lookout for potential dining spots as we were staying here for four nights before heading with the peloton to Olbia on the other side of the island. There were plenty to choose from, all sporting my default white (or pink) linen tablecloths and napkins. 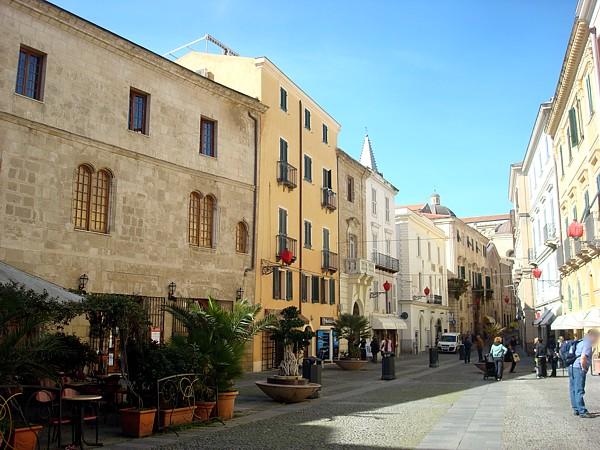 I spotted two old boys shooting the breeze speaking a language I didn’t quite understand but it sounded most like Spanish, and then the red and yellow Catalan flag was flying prominently from a number of buildings. Turns out, a part of its population is of Catalan descent. Back in the Middle Ages Sardinia was part of Aragon.

The town was already bedecked in pink: pink flowers, pink bikes, pink bunting and balloons, pink cycling-related displays in shop windows. You knew the Giro was coming to town. Of course, the party atmosphere was largely due to it being 1 May and a bank holiday pretty much everywhere in Europe.

After unpacking and exploring our hotel, we opted for a light snack and a couple of Aperol Spritzes for dinner – shades of our recent stay in Alassio. Breakfast the following morning was copious. I particularly enjoyed all the vegan options. I should add that at many Italian motorway service stations it’s now possible to get vegan croissants! I’m not allowed them as they’re made with soy but even so…mille grazie.

We spent the morning working before heading into town for lunch – more squid – and picking up our accreditations, a relatively speedy affair this year. It helps to be first in the queue. The afternoon was spent working around the pool with my beloved undertaking some of his exercises in the water. We opted for another light dinner, this time courtesy of the local Lidl before watching an action movie in Italian with me providing my beloved with a running commentary in English.

Wednesday we woke to birdsong, sunshine and clear blue skies. With almost all the teams billeted out of town we decided to forgo the inevitable round of pre-race press conferences in favour of a morning working, followed by lunch in a nearby town en route to the Trek-Segafredo presser. Well, I’ve got to show up at least one of them!

We had a seafood lunch in Porto Torres, where the ginormous ferries from Genoa and Toulon dock, before driving back into Sassari, the closest major town, to buy a memory card so my beloved could take some photographs. One of these days he’ll actually check he has everything he needs before we leave for a trip!

The team, along with many others, were staying in a hotel in Stintino, near to a national park on one of Sardinia’s most northerly points. There were surprisingly few journalists and I got my pick of the team. I plumped for neo-pro Mads Petersen, the almost benjamin of the Giro. He has a surprisingly mature head on very young shoulders. I’ve a feeling he’ll go far.

We drove back cross-country, marvelling at the open spaces and beautiful countryside dotted with sheep, goats and cattle, plus plenty of olive trees and vines amid bright bursts of yellow broom. As we passed through La Corte we noticed many of the roads were named after former Italian champions: Coppi, Bartali, Binda, Giradenga. In Alghero there’s a church and road named Valverde, remnants of its Catalan past rather than in deference to Alejandro Valverde, a Murcian pro cyclist with Movistar.

With the sun now firmly over Sardinia, Thursday followed a similar vein. We worked in the morning, headed into town for a late lunch and a spot of shopping. Alghero is famous for its coral and I’ve long wanted a coral necklace to match a beautiful coral ring my parents bought me over 30 years ago in Capri. I had treated myself to matching earrings in Como but I’ve never gotten around to completing the set until now. At my time of life, it’s definitely now or never! 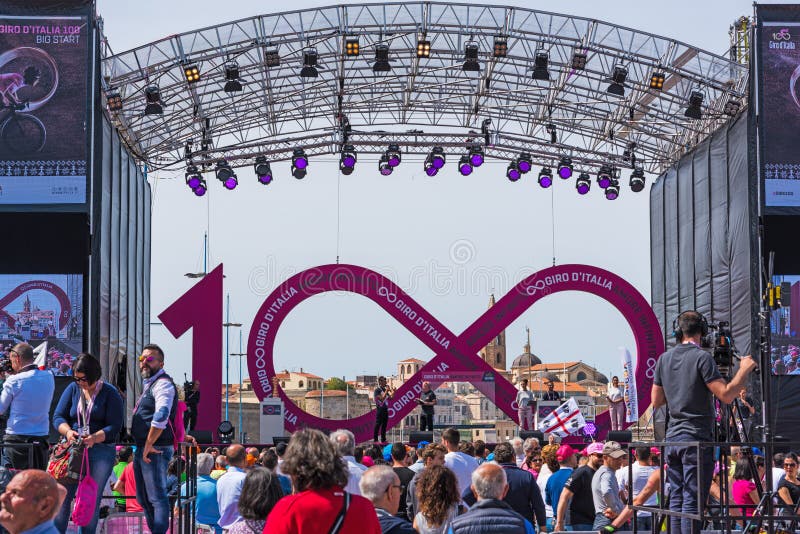 The team presentation was well attended and paid homage to the Giro’s illustrious past and present. We watched from a distance. A press scrum is no place for a man on crutches.

On Friday, the town was pumping. Folks had obviously come from far and wide, many decked out in pink, particularly the kids who all seemed to have pink whistles. Great for the atmosphere but no doubt parents would be cursing them later in the day.

The race set off amid much fanfare, Astana at the head of proceedings in memory of the recently departed, much admired Michele Scarponi. Having said a quick hello to those riders we know, it was back to the car and off to the other side of the island to watch the finish in Olbia, a town close to the world-famous, ritzy resort of Costa Smeralda.

2 Comments on “Postcard from Sardinia: Part I”