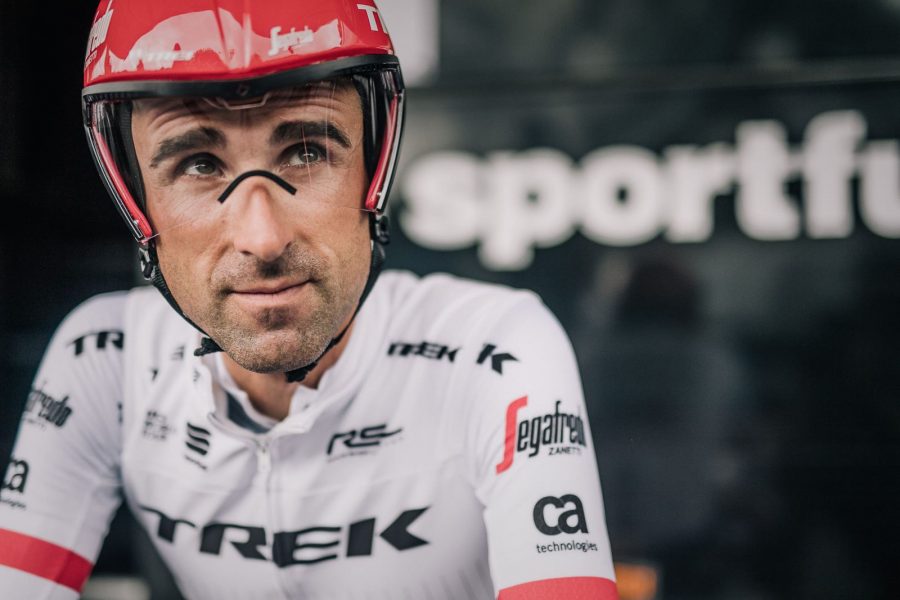 Typically I’ll make a point of talking to riders participating in their first ever grand tour, or their first Tour de France, because their slightly nervous excitement and sense of adventure is intoxicating.

This time though I thought I’d head for the opposite end of the spectrum and talk to the oldest, most experienced rider in the race, one taking part in his 16th Tour and who had been literally called off the substitutes’ bench at the last moment.

Meet our #TourDeTFS team.
🇪🇸 @hzubeldia the calm, veteran climber will bring valued support in the mtns. The #TDF2017 will be his 16th! pic.twitter.com/w4gME8Br3Q

In previous additions of the Tour, Haimar Zubeldia (Trek-Segafredo) has managed five top-10 finishes almost without anyone noticing. The Basque cuts a tall, elegant figure in his all black casual clothing and he’s long been one of my favourite riders. I always enjoy watching him race in the Basque country where family and friends turn out in droves to support him and when, inevitably, he wins the prize for Best Placed Basque Rider, his two daughters, whom he refers to as his angels, love getting up on the podium with him and holding his bouquet and cup.

It was clear that he was bitterly disappointed not to have been first-choice to race in what will be his final Tour de France, particularly as he’d ridden the recent Dauphine as road captain for Alberto Contador, with whom he’d participated in the Tour much earlier in both their careers (Astana in 2009 and RadioShack in 2010), and was keen to repeat the experience. However, he told me he’d suffered some dark moments before the telephone call summoning him to Duesseldorf.

My family like cycling a lot but last week was not easy for me when I was not selected in the first moments and my wife she really showed me something more.

I complimented him on the length of his career and asked whether it was due to anything in particular. He said not and, of course, at the start of his career he’d never dreamt he’d still be riding at this age. But he’d stayed fit and competitive and still loved riding his bike. He said:

I don’t know how I stay here this long but always I say I’m here now. Obviously, I do something well and I now can teach the younger riders, giving them advices like I received 20 years’ ago. For example, now I’ll say to them to try and sleep an extra hour each day because by the end they’ll appreciate the 21 hours’ extra sleep.

I asked whether he’d given any thought to what he might do after he’d retired from racing competitively. It was clear that whatever it is, cycling will still feature. He reiterated:

Fortunately, in my career, I have a lot of help around me and my idea is to have time to ride but at another level. I have a lot of experience and I would like to continue in cycling. I don’t know now in which side but maybe help in clothing?

I don’t know exactly when I’ll finish my career but afterwards I’ll need to organise my life, spend time with my family specially because in the last few years with the days spent racing and at camps, I miss a lot.

We also discussed neo pro Ruben Guerreiro, newly crowned road race champion of Portugal, who I’ve been following over on VeloVoices. He’s spoken appreciatively of the advice and guidance he’s received from Haimar with whom he roomed in the recent Amgen Tour of California. Haimar remarked that he enjoyed this aspect of his role and was one of the reasons he’d resigned for 2017 with the team. He spoke fondly of Ruben whom he said reminded him a bit of himself when he was younger. I can see the similarity neither talks for the sake of talking but when the floodgates open, stand back and listen.

I can’t help feeling that, given the nature of this year’s parcours, the team and Contador in particular, will be better served by Haimar’s presence on the squad.