We were watching the magnificent Classical Concert from the Eiffel Tour on Bastille Day,  Le Concert de Paris, featuring the great and the good from the world of classical music playing and singing a selection of Greatest Hits Arias. This is the world’s largest outdoor concert, held during the world’s largest annual sporting event, the Tour de France. During an early number, my beloved spotted the person playing the triangle. I suppose it was one of the many percussionists. Immediately my beloved said: “I could do that!”

I replied that he’d probably get distracted, miss his cue and fail to strike the triangle when necessary. I said an ear for music and an ability to concentrate for long periods of time were probably two of the minimum requirements. Plus, you probably needed to play other instruments. Frankly, it’s doubtful my beloved would cut the mustard. I sensed he was about to argue but thought better of it and decided to agree with me. Yep, he’s definitely getting wiser in his old age!

His comment got me thinking. Why is it we always assume we can do things which look easy on the television! Making something look easy usually takes that oft quoted 10,000 hours of practice, the right attitude and plenty of application. We are after all talking about a man whose mother forced him to endure hours of piano lessons – delusions of grandeur on her part – and who can now only remember how to play Chopsticks, a tune I too can play without having received any piano lessons, let alone passing a couple of piano exams.

The truth is that I can read music and still play the descant recorder but that’s where any musical ability starts and finishes. Neither of us can hold a note which is why whenever we’re obliged to sing, out of consideration, I mime. Not so my beloved who’ll attempt (and fail) to belt out a tune. 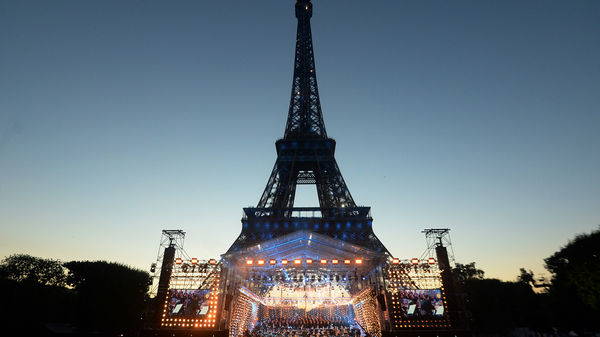 Anyway, back to the concert, the audience estimated at around 400,000 was no doubt enjoying the world’s largest picnic on the grass as the sun gradually set. Before darkness fell, we were treated to magnificent views of the City of Light which always looks fabulous from the sky as you can clearly see its urban master plan. The concert was followed by a truly wonderful fireworks’ display, a fitting end to a special day and (thankfully) so very different from last year.

Of course, cycling fans would probably argue that with Warren Barguil winning stage 13 on Bastille Day, we’d already had plenty of fireworks. This was the fourth French victory after those of Romain Bardet, Arnaud Demare and Liliane Calmejane with the exciting  prospect of maybe more to come.

4 thoughts on “Things my beloved says: I could do that!”