Having successfully completed the Engadin Marathon trial-run, Friday and Saturday were spent preparing our skis with the right waxes, stretching our aching limbs to aid recovery and indulging in a spot of carbo-loading. After my beloved’s faux humour, everyone was very solicitous towards me, carry my skis, making sure there was room for me at the table, giving me a helping hand so I didn’t slip on the icy paths and so on. Frankly, it made a nice change from being ignored/taken for granted by my beloved.

The Engadin marathon starts at 08:30 for the elite racers however there’s a tendancy for everyone to turn up far too early for the start. We were there at 06:30 to brave the elements and the very, very long queues for the facilities. I see from the event’s website, they now provide heated tents for people to wait in, but (sadly) not back in 1990. As newbies, my beloved and I were at the back of pretty much everyone and, like the London marathon, it took a while just to get over the start line though no one was wearing fancy dress. 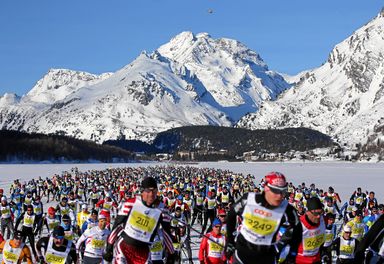 While waiting for the start, I realised I had drunk too much hot tea staving off the morning chill which meant I needed yet another comfort break. I took an executive decision. I wouldn’t ski back to the facilities at the start but would have a pit stop at the first set of facilities, because there were bound to be portaloos en route? Wrong! I note from the profile map above that there are now facilities along the course but (sadly) there weren’t any back in 1990. However, there were tons of spectators with their video cameras. A fear of featuring on someone’s home video kept me glued to the track rather than seeking out a tree or some bushes for a much-needed pit stop.

I consoled myself with the thought that I’d stop for a comfort break in one of the many villages on the route but I soon discovered it was well nigh impossible to leave the track. With an already overfull bladder, I moderated my intake at the feed stations where the biggest hazards were rolling paper cups, soggy snow from dropped liquids and volunteers encouraging you to drink Rivella – revolting! 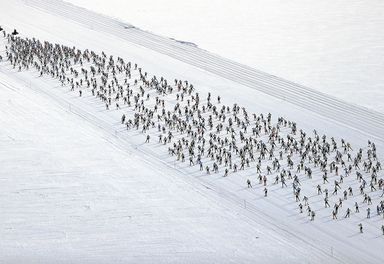 As one of the race’s tail-end Charlies, I had plenty of time to take in the raucous support from the spectators lining the spectacularly scenic route which helped take my mind off my more pressing need. Finally, about three-quarters of the way into the race, I reached one of the villages (La Punt) where there was a small restaurant right next to the tracks. I threw down my skis and legged it to the toilets. There was a long queue for the ladies but no one waiting for the gents. Who cared? Not me, I rushed in. What a relief!

Needless to stay without that pressing matter my skiing much improved and I sped toward the finish. As I approached the line, I listened to the announcer. I was just ahead of the oldest person in the race, an 86 year old woman, a local. I positively raced across the line to beat her by a full minute – result!

This was my maiden attempt and I went on to improve my time subsequently, particularly once I learnt the skating technique. My best ever time for 42km is just over three hours while the winner – usually a professional ski racer – takes 76-78 minutes! I’ve never taken part in any other ski marathons  largely because so many are even longer and I fear I might need an overnight stop.