One of these years I will endeavour to follow the entire route of Paris-Nice, just not this year.  This time I joined the race for the start of stage 5 in Salon-de-Provence. We’ve visited the town a number of times as my beloved has a client here. But, last year, during the Tour de France, was our maiden venture into its small but beautifully formed Old Town.

My overnight stop was chosen deliberately because of its prized location, with a parking place, most of which in the town had been suspended because of the race. The B&B is the family home of a doctor, who runs his practice from the front two rooms, and his designer wife who runs their home, the B&B and her design practice from the rest of the building which includes a delightful, enclosed courtyard garden and pool.

I was buffeted by the wind on the drive down but didn’t mind as the sun was shining. Everything looks so much better in the sunshine, doesn’t it? Spring was definitely in the air. The mimosa might be on its last legs but the bright lime green of new leaves and shoots was everywhere, along with what I assume is cherry, or maybe apple, blossom.

As anticipated the drive took me just over two hours. I easily located my lodgings and joined my hostess for a reviving cup of green tea while her tiny dog Lilli gazed at me in adoration and gave my shoes a quick clean and polish. The owner looked a tad put out at this open transfer of affection. I didn’t bother to enlighten her about my enduring and inexplicable attraction to dogs.

The house was charming and had been strikingly decorated. It certainly wasn’t to my taste but it made a pleasant change from a beige hotel chain bedroom, plus my bedroom and bathroom were very generously proportioned. Space is always a bonus. I was also their only guest and barely made a dent in the copious breakfast the following morning.

I had arrived suitably laden with baked goodies for a number of the teams. I noted with interest that my race winning brownies served up at Strade  Bianche had  wrought their magic in the team time-trial at Tirreno Adriatico. Maybe, they’d have a similar effect at Paris-Nice, I certainly hoped so.

Brownies handed out and gratefully received, the peloton departed and I tarried over lunch in the sunshine before heading back to the motorway to get to the race finish in Sisteron. This is a much used location by ASO and I’ve lost count of the number of times I’ve visited. I’ve also ridden extensively around here, so it’s always a pleasure to revisit. I typically stay at the same hotel, the Ibis. Definitely beige but usually in the company of a couple of cycling teams. This time it was to be Lotto Soudal and Astana.

As I joined the motorway I had an epiphany. I cancelled my room in Sisteron and drove home. I just had this feeling that I should watch the stage finish, not the stage start. This was to prove a wise decision. 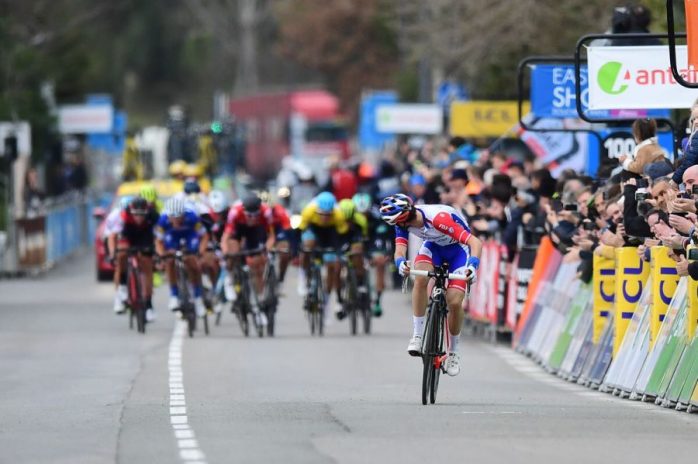 Friday afternoon, I drove up to Vence to watch the final kilometres of a stage which covered roads I know, ride regularly and love. As ever I get a real kick from seeing the professional peloton ride on my roads. My instincts proved correct, the stage was won by a friend, Rudy Molard. I was so happy for him. And, yes, he’d been one of the recipients of my race-winning brownies!

Sadly this year’s Race to the Sun was no such thing. The week-end was a wash-out. I woke on Saturday morning to the sound of pouring rain, rolled over and went back to sleep. I had no intention of getting soaked like the previous week-end in Siena. Instead I watched an enthralling stage on the television before heading to the airport to collect my beloved, where I discovered  – not for the first time – he’d misinformed me about his arrival time. I returned home, took his dinner out of the oven and returned once more much later.

Sunday morning we awoke to the sound of heavy rain and wind. We took an executive decision to watch the final stage of the race on the television. This too proved to be wise as, with the exception of the last few kilometres, it rained all day. It felt like a bit of a cop out not to watch both stages live but, to be honest, my flu symptoms had reared their ugly head again. Serves me right for kissing so many in the peloton who were subsequently DNF or DNS on account of the flu. However, when you get to my age, the opportunity to kiss so many fit young guys in lycra shouldn’t be ignored, despite the consequences.

In spite of the weather, or maybe because of it, this year’s Paris-Nice was a rip-roaring race which kept us on the edge of our seats throughout before a long-range, smash and grab by the Spaniards on the final stage causing a couple of wags to re-christen the Promenade des Anglais, Promenade des Espagnols!