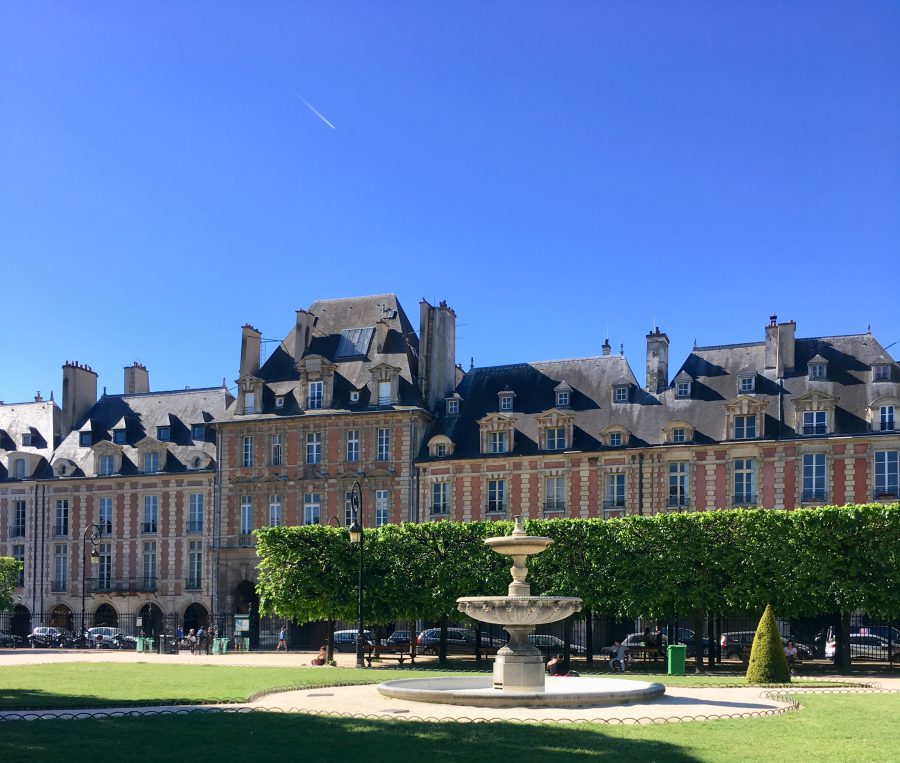 Over the years we’ve tried to stay in and explore many of the different arrondissements in Paris. It’s not that we’ve “run out” of quartiers but rather that we’ve fallen in love with Le Marais (3rd and 4th arrondissements) which, along with Montmartre, Saint-Germain-des-Prés and the Ile Saint-Louis, is one of the most evocative quarters of Old Paris. We love its architecture and atmosphere.

Paris’ first “protected” area in 1965, Le Marais is now the finest flower of old Paris, an open-air museum of French architecture where the various renovated Hôtels evoke the spirit of the Old Royal Capital, nowhere more so than Place des Vosges.

The former Place Royale was built between 1605 and 1612 for Henry IV who intended it should be a centre for Paris’ many artisans, not an aristocratic square. But the project proved too expensive and the investors increasingly fancied the location for themselves. So the bourgeois pavilions, with their commercial galleries below, became aristocratic properties around a central space which the King decreed should be a recreational area for Parisians. Properties in Place des Vosges are eye wateringly expensive but everyone can still enjoy the square.

No trip to Paris is complete without a trip to Le Train Bleu at the Gare de Lyon be it for lunch, a snack or just a drink. It’s a place I planned to take my Dad, I know he’d have loved the decor, approved of the old-style service, and enjoyed the food. As you can see from the photo, its cherubs, mermaids, painted scenes and lashings of gilt recall journeys to the Côte d’Azur in the heyday of steam. Built for the 1900 Exposition Universelle, it remains a glamorous out-of-time experience amid the clamour of the Gare de Lyon station. Food in the restaurant is a grand and delicious take on brasserie classics while the comfortable, clubby bar offers a good place to sit, have a drink and wait for your train. 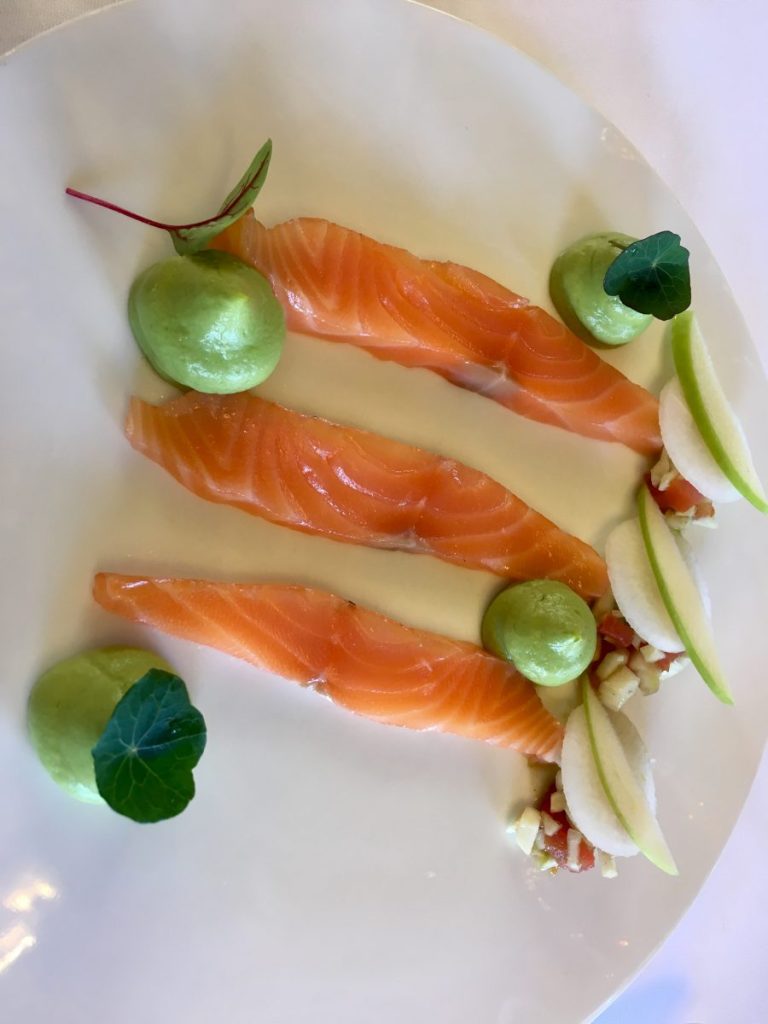 The French are not noted tea drinkers however, in the afternoon, they do enjoy a really good cup of high quality tea. We’re particularly fond of this company which, aside from selling tea, also has a tea shop and restaurant in Le Marais. We pop in to stock up on supplies and are enjoying working our way through their extensive list of teas. My beloved has also been known to down one of their delicious cakes! Not unlike Le Train Bleu, the tea room has an air of a bygone era and I love how knowledgeable everyone who works there is about the hundreds of different teas.

The company has plenty of outlets in Paris and beyond, but this is the branch we typically patronise

No trip to Paris can be considered complete without oysters and champagne. Imagine, my beloved and I went for years turning our noses up at oysters believing they looked, and hence would taste, snotty. Finally, we suspended disbelief, closed our eyes and downed one – heaven! And, we’ve never looked back. There are plenty of restaurants serving seafood but we rather like this four-restaurant company and have eaten at both their Place des Vosges and Ternes restaurants. 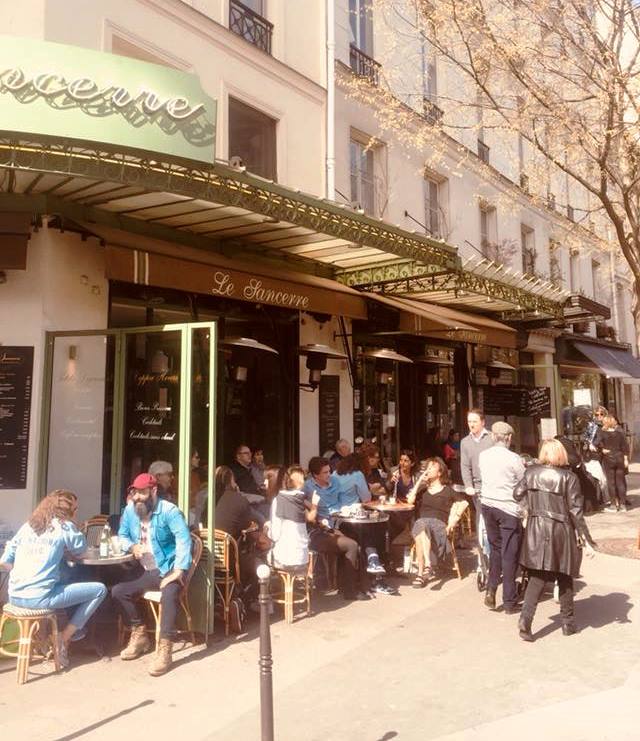 The joy of dining at these old-fashioned brasseries lies not just in their food, but in their neighbourhood ambience. The food is wholly acceptable, exactly what you want at a neighbourhood brasserie – crowd pleasers, a daily menu, great atmosphere, owner run, plenty of locals.

A few hundred metres further on is another of my favourite brasseries. Café Charlot is on the other side of rue de Bretagne, closer to Marché les Enfants Rouges and has the advantage of a sunnier terrace than Le Sancerre. It’s one of the more attractive cafés thanks to its magnificent old-fashioned bakery shop front, its wrought iron still intact and with its retro ambiance. It too has a menu full of crowd pleasers and turns out perfectly fluffy omelettes. A great place for breakfast, brunch or lunch. 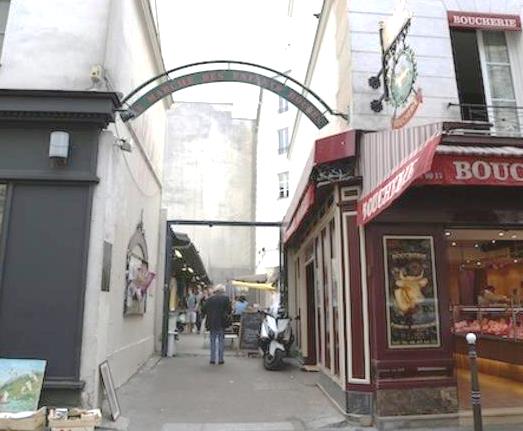 The market was named after the 16th-century orphanage which previously occupied the site and whose children wore red clothes indicating they’d been donated by Christian charities. Although the orphanage closed before the revolution, the imposing wooden edifice remained and it was reopened as a food market in 2000. Now something of a tourist hotspot, the market is well-equipped to fill the emptiest of stomachs with its impressive range of artisanal and organic produce plus and a range of eat-in or take-away delicacies from places such as Tunisia, Italy, Greece and the Middle East. It’s certainly one of the more atmospheric of Paris’s food markets.

Unsurprisingly, rue de Bretagne has plenty of traiteurs and food shops, including a branch of Pierre Hermé.

This great Haussmannian market was renovated and reopened in 2014. Carreau du Temple produces more than 230 artistic, cultural, sports and lifestyle events every year. In addition, it hosts more than 50 associations which offer weekly classes and courses for everyone. This innovative project in the heart of Paris cleverly oscillates between a broad cultural offer and event programming. We always make a point of seeing what’s on while we’re in Paris. On our most recent trip there was an exhibition devoted to arts and crafts.

Which are you favourite spots in Paris? Let me know!