The Barcelona-Catalunya circuit in Montmelo has hosted a Grand Prix every year since it was first included on the calendar in 1992. It’s a superb track, with great facilities, well-organised, and the parking is free. It’s about 25km to the north of Barcelona and is the home venue for many of the sport’s biggest stars including reigning MotoGP world champion Marc Marquez, former world champion Jorge Lorenzo, Maverick Vinales – surely the best name ever –  Dani Pedrosa and the Espargaro brothers Aleix and Pol. Fortunately, the race falls in June, a great time of the year to visit this beautiful region.

It was as if we’d never left French soil. Everyone seated around us in the MotoGP grandstand  was speaking French and, as we strolled around the circuit, our ears were naturally tuned into all the French voices. Still, it’s easy enough to just pop over the border, though the French number plates in the car park came from all over. 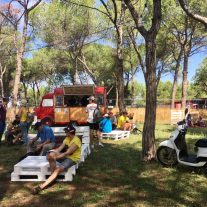 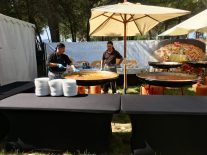 Between sessions, we like to wander round the stalls, see who’s buying what and look at the various edible offerings. Apart from us, everyone seemed to be wearing an item supporting one of the teams or riders, usually a cap or t-shirt. Some were impressively decked out head to toe in support of their favourite rider, often along with a tattoo of the same. In fact, tatts were very much to the fore. The two of us were a small tattoo and endorsement free zone. 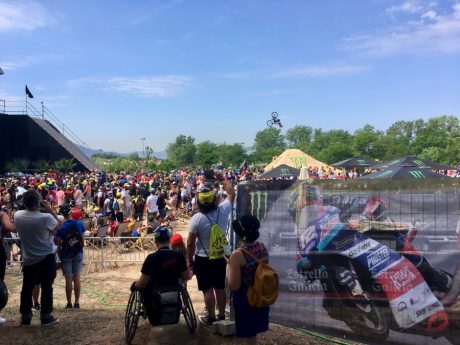 This MotoGP was sponsored by Monster Energy who put on an impressive display of trick cycling, wave boarding, a DJ and lots of lovely ladies in skimpy outfits, frolicking in more water – or was it Monster Energy? – with whom you can have a selfie.

Aside from the circuit, the French had also invaded and taken over the hotel where we were staying. They came, they saw, they conquered on their powerful motorbikes, all 1000cc. That’s a lot of throbbing power and gleaming chrome between your legs. I wouldn’t know as I have never been on a motorbike. That’s not a proud boast, rather an if only………..maybe one of these days!

The last time we attended the MotoGP in Catalunya was back in 2013. I’d purchased the trip on one of those cut-price sites. It turned out to be the bargain of the century. We had a fabulous time, including a day sight-seeing in Barcelona gorging on Gaudi and jamon. This time we stayed up the coast from Barcelona, just 30 minutes from the circuit, and airport.

We flew over on Thursday morning. The flight took less time than the wait for our luggage and car! But, finally, we were speeding along the motorway to the hotel chosen by my beloved (and approved by me). The boy done good! I like to think that after 40 years together he’s finally learned something.

We stayed in the coastal resort of Mataro, which has a rich history dating back to Roman times. Aside from its marina and wide sandy beaches beaches, there’s a number of archaeological sites, including some Roman remains. But that’s not all. The first ever railway line to be built on the Iberian Peninsula in 1848 linked Barcelona to Mataro. 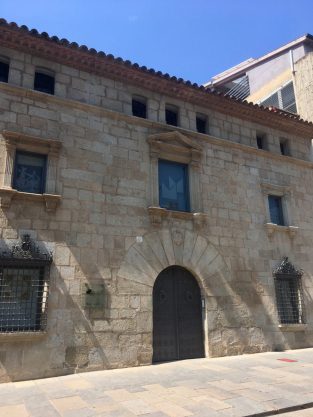 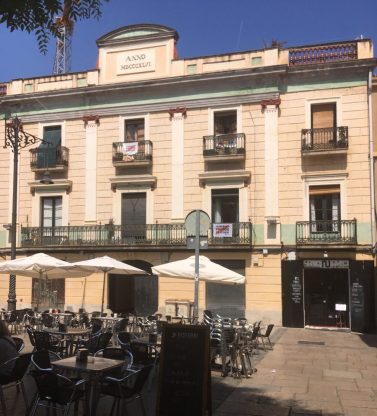 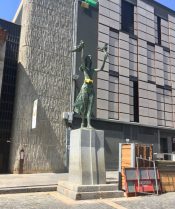 Mataro’s Old Town is partly ringed by a 16th-century wall, within which is the 15th century Basilica of Santa Maria. La Wrier and La Rambla are the town’s main arteries along which lies its 17th century City Hall and, where the two roads converge, in Plaza de Santa Anna, there’s a lovely pink Baroque church. 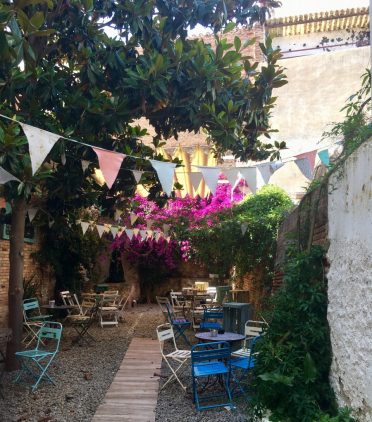 It’s interesting to wander around the narrow lanes of the Old Town, wondering what you’ll find and/or see. We chanced upon Spain’s answer to Green Day conducting a sound check in one of the town’s many squares, plus some oddly dressed characters. Were they connected? Who knows! More importantly, we found an impressive cake shop and enjoyed its wares in its sunlit garden. 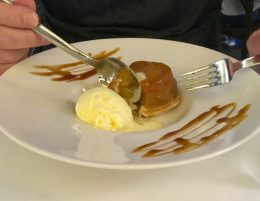 We combined the MotoGP with watching some of the World Cup football, including the opening match, plus Ronaldo v Spain. We missed France’s first game, as we were at the circuit, but much enjoyed seeing Mexico get the better of Germany. I also got to celebrate World Lobster Day, albeit a day late, with fried lobster – a first!

The sessions at the circuit kicked off early with Moto3 whose engines sound like pesky mosquitos that you’d like to swat before the full-throttled and ear shattering MotoGP engines take to the stage. Your entire body seems to throb in time with those revs. Friday is typically quieter in terms of spectators, building to capacity on Sunday. But whichever day, VR46 or Valentino Rossi fans outnumbered all the others combined.

We were in Spain but, Marc Marquez aside, fans of the other Spanish riders, including former world champion Jorge Lorenzo, are very much in the minority. Not so French rider Johann Zarco who mustered an impressive fan base. We’ve met his Dad who lives in Cannes and rides for one of the local cycling clubs.

I like to watch all the action at the circuit, not wishing to miss any of the Free Practice sessions, nor Qualifying or Warm Up. Throughout the three-days, there were thrills and spills, plus one bike combusted. Importantly no one was seriously injured. Unusually, three different nationalities topped the podiums in their respective classes including, for those sitting around us, a Frenchman in Moto2.

Funnily enough the least interesting race was probably the blue riband event, as the podium was settled fairly early on. But the week-end was nonetheless extremely enjoyable and, should we decide to go again, we’ll definitely stay in the same hotel.

← Things I’ve done: drank way too much Sangria
I don’t like Mondays →

8 Comments on “Postcard from Montmelo”