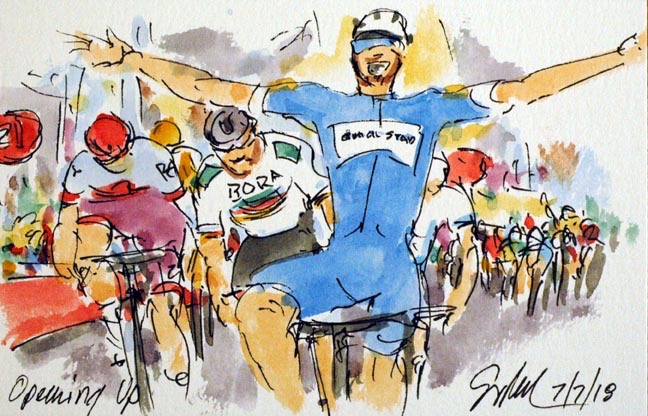 My beloved and I were in the Vendee for the start of the Tour de France. We had based ourselves just over the border in La Baule, well placed for the first four stages. Saturday’s opener kicked off in Noirmoutier-en-L’Ile which is attached to the mainland by the oft underwater, UNESCO protected, Passage du Gois. Luckily, there’s also a rather spectacular bridge which was used by both us and the peloton.

Proceedings got underway early so that everyone could watch THE match. Today’s photo is artwork from my dear friend Greig Leach who faithfully records the key moments of every stage. This is of the stage winner Colombian Fernando Gaviria who took the race lead, points’ jersey and that of best young rider on his maiden stage, in his debut Tour. I would’ve used one of my own photos from the stage start but the place was rammed and every photo contained bits of spectators. If only I were much taller!