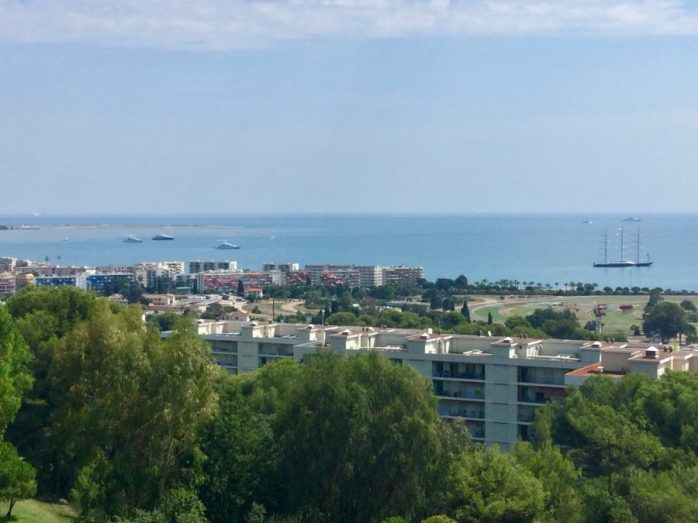 The view from our terrace encompasses our local hippodrome. We much enjoy its year round festivities which often conclude with displays of pyrotechnics. Its summer racing season drew to a close this weekend and, having not darkened its door to watch any races for a while, we decided to go on Friday evening. We took our semi-resident expert, my sister Lynn, who has an account with Paddy Power and wins a fair bit of money on horse racing.

My beloved and I qualified for half-price tickets so it was Euros 9,00 for the three of us to get in, plus free car parking. Kids go free and there’s plenty to amuse them with bouncy castles etc. We easily found seats in the Tribune and opted for bottles of coooling water rather than anything alcoholic, before turning to the free information sheets to select our runners for each of the seven races: all trotting events, six in harness and one mounted.

Obviously, my sister is not familiar with trotting, either mounted or with a harness, but nonetheless, she still had more success than either of us in picking winners. I was at least fairly consistent as my horse in the first three races was disqualified for breaking into a canter. Thereafter, in the fourth race my chosen horse finished – finally! –  I then had two third-places and a fifth. Obviously, I’m never going to win big on the PMU (French equivalent of The Tote). 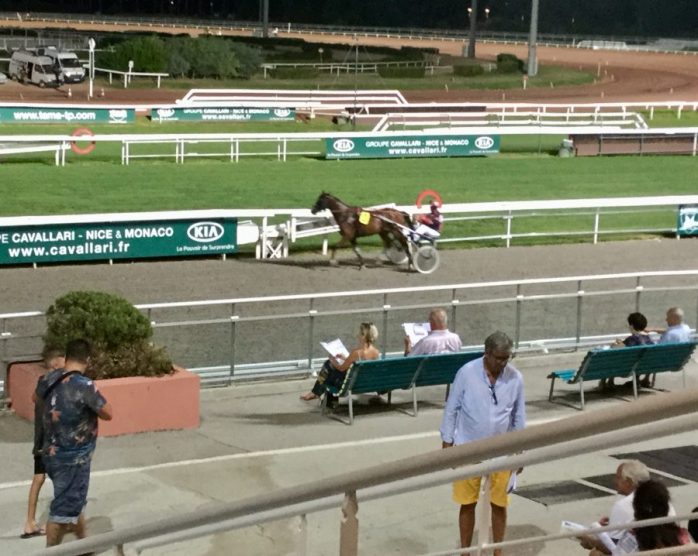 Our local hippodrome, is one of the larger racecourses in France, having opened its doors in 1952, initially with temporary facilities, and it wasn’t until December 1960 that it was officially inaugurated. Its most prestigious  race is the Cote d’Azur Grand Criterium of Speed, one of the great classics of the trotting season in Europe, held during its winter season.

The racetrack covers approximately 63 hectares and can accommodate up to 12,000 people, with a tribune seating ​​6,000. It has several tracks, including 16 hectares of grass tracks for the flat and over the sticks, 4-hectares of  flat sandy tracks and a 3-hectare red-earth trotting track.

Aside from the horse racing and jumping, the track gets used for numerous exhibitions and events throughout the year. 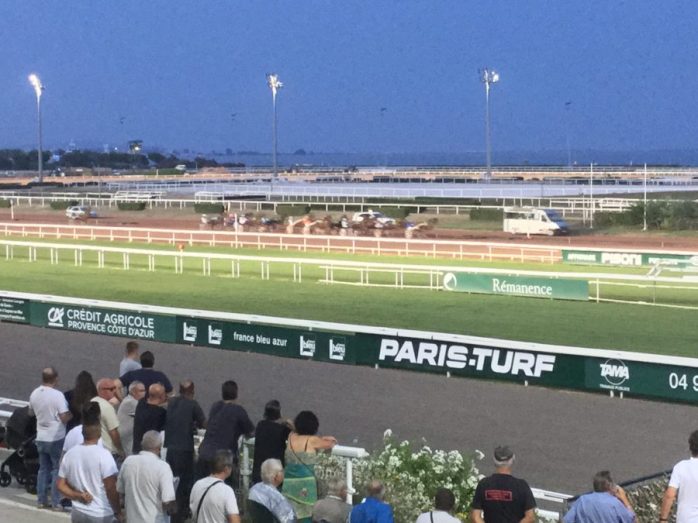 French horseracing is among the most active and dynamic worldwide. It organizes more than 2,000 meetings a year with an average of 8 races per meeting covering all disciplines: flat, jump and trotting. You can bet on many of these races only via the PMU.

France is the world leader in organising trotting races. It has also created and conceived its own horse breed, le Trotteur Français (the French Trotter). More than 11,000 trotting races take place in every year, representing 61% of the total French races organised, which includes both harness and mounted trotting races.

It’s a jam-packed sporting week-end with the start of what’s sure to be a fascinating Vuelta a Espana, the MotoGP from Silverstone and the third match of the 2018/19 football season for Ligue 1 here in France. Tonight we’re off to watch OGCN play at the Allianz Riviera against Dijon which, despite the absence of Super Mario – yes, he’s staying, break out the party hats – banned for first three matches of the season, we’re hoping will be our first victory of the season.

← Reflecting on our trip to Pornichet
The Musette: speedy Sunday roast →

3 Comments on “Date night: the horses”