In my 13 years living in France, I have not once received a greetings card of any kind from my wide circle of friends and acquaintances. Should I be concerned? No, because the French don’t do greetings cards, not like the Brits.

UK consumers lead the rest of the world in sending greetings cards. In a recent survey, over a third (37%) of UK adults said they had sent a greetings card, invitation or postcard in the post in the last month – the highest in the world and beating Australia into second spot (34%).

I cannot say I was surprised to learn that consumers in France were the least likely to send greetings cards, with only 17% saying they had done so – half the amount in the UK. If anything, I was astonished it was so high. Must be all those British immigrants skewing the statistics. 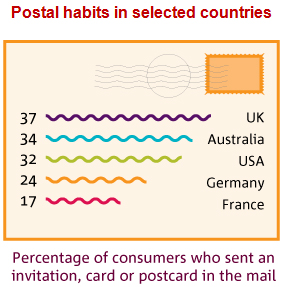 It’s not just physical greetings cards, I’ve never even received an e-card from any of my French friends, generally just an email thanking us for our Xmas card and wishing us all the best for the following year. Likewise, in response to our Xmas cards, some of our neighbours have sent us handwritten thank you notes.

So why is this?

The sending of cards isn’t as common in France as in some other countries. It isn’t, for example, usual to send someone a card following a bereavement or after passing an exam. Instead of Christmas cards, the French send New Year cards, but only to people they don’t normally see during the year, which is what we now do.

Sending Christmas cards is popular in many Anglo countries but it’s not a common custom in France. While it’s nice to get a hand-written card in the mail, I think many people just send them out because it’s considered a social faux-pas if you don’t. In the days of texting, Facebook, carrier pigeons, there’s clearly no need to send Christmas cards.

Because the French don’t send Holiday or Season’s greeting cards, sending Happy New Year cards is pretty stress free. You have the whole month of January to write a non-personal very brief card that will warm the heart the person who receives it. Typically, the card is written on a mignonette, on a greeting card or even sometimes on an old fashion ‘carte de visite’ – calling card.

Also, I think I read somewhere that since 1962, France has had a law that stipulates any letter to Santa must be responded to in the form of a postcard. This is a much better way for postmen to spend their time rather than delivering soulless Christmas cards!