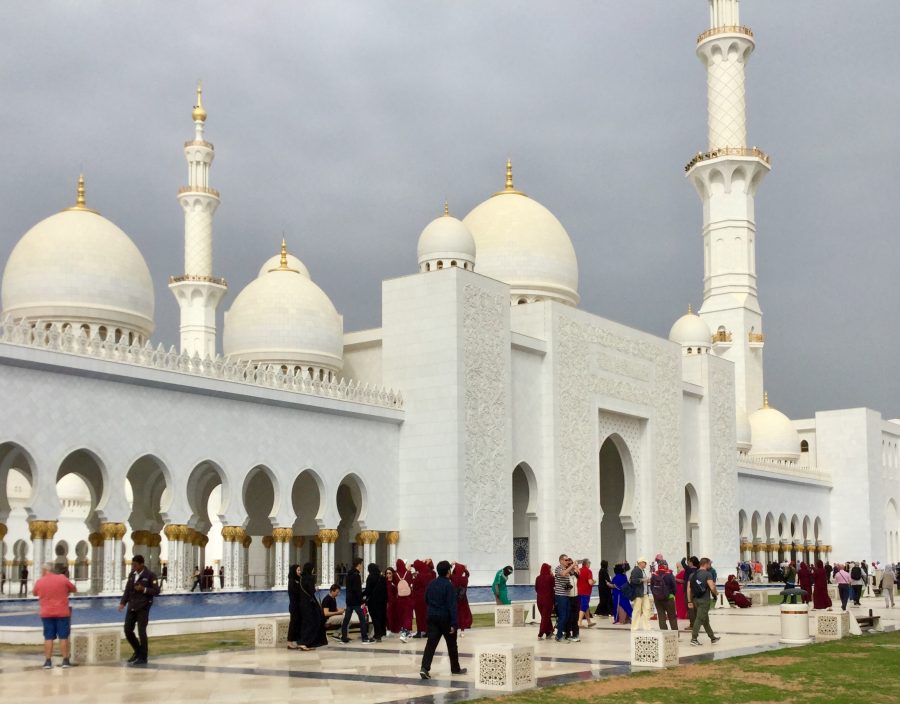 Our most recent vacation to Dubai started in some style. Friends told us to visit Abu Dhabi to see the Blue Mosque and the Louvre. We followed their advice and I booked a small guided trip to both. The journey from downtown Dubai takes about 90 minutes by coach along a straight road which has largely scrubby desert on either side, including the horse and camel racing tracks and, as we neared our destination, Ferrari and Warner World.

We visited ahead of the Pope who was making his maiden visit to the Middle East. You could say we were the advance party!

The mosque is absolutely spectacular and well worth the trip though I’m sure my photos don’t do it justice. We entered, all suitably clad, by way of an underground, air-conditioned tunnel with plenty of washrooms. The tour company lends the ladies traditional dress while gents have to wear trousers and shirts. Fortunately we get to keep our shoes and consequently our passage through the mosque is limited to certain areas.

Built in homage, The Sheikh Zayed Grand Mosque is the largest one in the UAE and is a key place of worship. During Ramadan it may be visited by more than 40,000 people daily all of whom get royally fed for free at sundown. Designed by Syrian architect Yousef Abdelky, it was constructed between 1996 and 2007 and allegedly cost in excess of US$1 billion.

The complex covers an area of more than 12 hectares, excluding exterior landscaping and vehicle parking. The main axis of the building is rotated about 11° south of true west, aligning it in the direction of Mecca.

The project was launched by the late president of the UAE, Sheikh Zayed bin Sultan Al Nahyan whose tomb lies adjacent to the Mosque. He wanted to build a structure that would unite the cultural diversity of the Islamic world with the historical and modern values of architecture and art. The project was completed by his son.

The Mosque’s design was modelled on earlier Islamic structures particularly the Badshahi Mosque in Lahore which inspired its dome layout and floorplan. Its archways are quintessentially Moorish while its minarets are classically Arabic.

More than 30,000 workers took part in its construction from largely natural materials including marble, gold, semi-precious stones, crystals and ceramics. Its courtyard depicts one of the world’s largest mosaics.

The eye-wateringly, colourful wool carpet in the central hall, which we could only admire from afar, was made in Iran and designed by Iranian artist Ali Khaliq. Above the carpet are seven German chandeliers which incorporate millions of Swarovski crystals and are suitably bling-bling. The hall’s 96 columns are clad in marble and inlaid with mother of pearl. The pools of water along the external arcades keep the Mosque cool through a heat-exchange system and, when lit up at night, reflect the phases of the moon.

It’s a magnificent piece of architecture and well worth a visit though you have to resist the security guards exhorting you to move along before you can take in everything. Our guide was particularly well-connected and we left by the VIP entrance which saved us a soaking getting back to the coach.