The first of this year’s Monuments (five oldest one day bike races), La Primavera goes from Milan to Sanremo. A parcours of almost 300km and, aside from the Turchino, all the hills are in the last 60km. I should add these are not difficult climbs, I’ve ascended them with ease having wisely eshewed the first 230km of the race route. 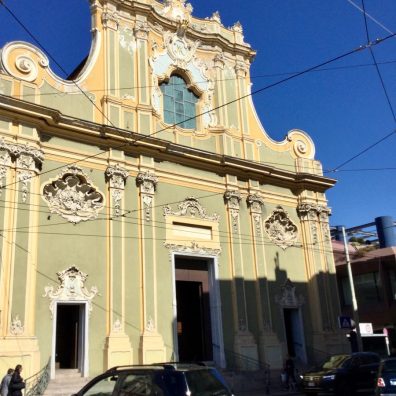 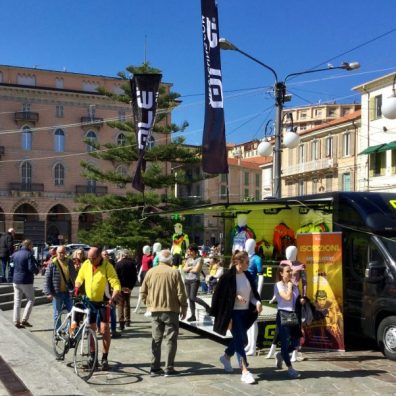 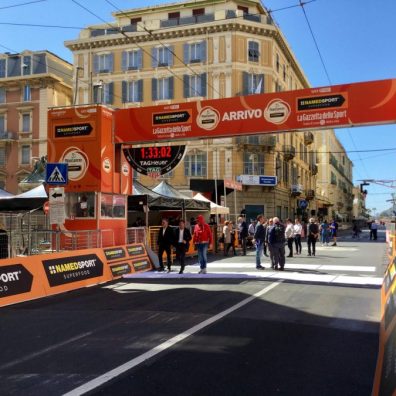 We always enjoy our day trips to Sanremo, particularly when the weather’s as fine as it was yesterday. We drive over early, park and head to the shops to buy all manner of Italian goodies. There are some great shops adjacent to the Palafiori which acts as race HQ for the day. We then enjoy a stroll, coffee and some harmless window shopping in the sunshine before lunch, the main event of the day. 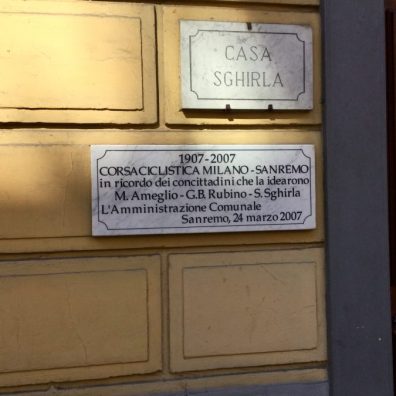 I often choose a restaurant near the port where there are a veritable gaggle of good ones. This time I picked what is allegedly Sanremo’s finest just past the race finish. We were not disappointed and particularly enjoyed having the restaurant to ourselves. Mum and son run front of house while Dad cooks using local produce, largely fish, with the fruit and vegetables coming from his market garden. We chose the menu of the day which needed only a slight tweak to accommodate my dietary requirements.

Replete we headed back to race HQ to watch events unfold along the coast road. The views from the race helicopter were a fabulous advertisement for the Italian Riviera. 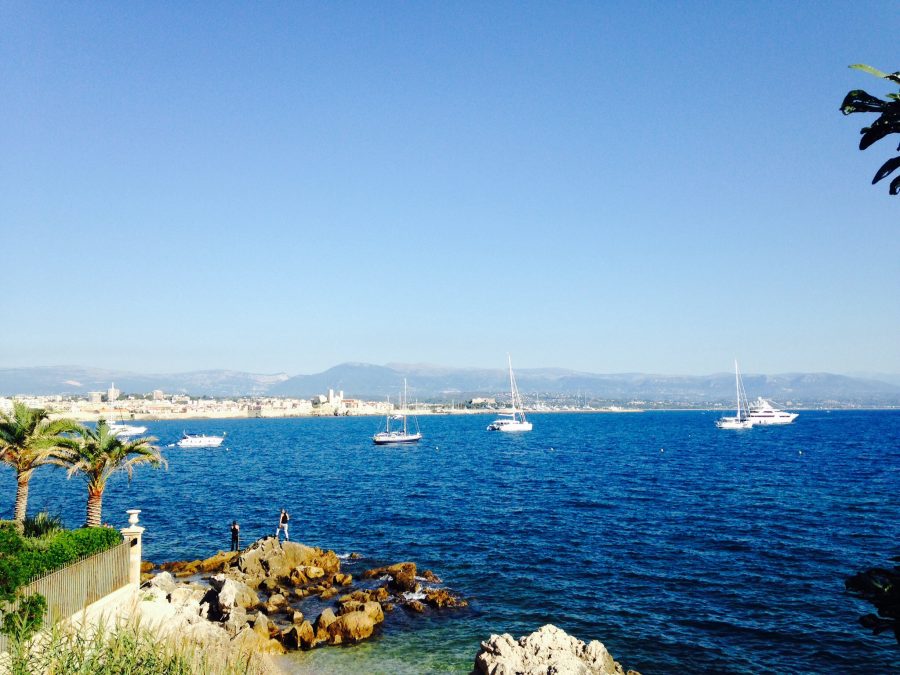 We first visited Sanremo in 2006 when it featured in the final stage of the long gone Tour of the Med. We watched the race from a pinch point on the Cipressa. The following month we stood on the finish line of Milano Sanremo, listened to the commentary, and saw Pippo Pozzato win. This was in the days before the organisers erected those lovely big screens at the finish.

I’ve been in Sanremo every year since to watch the race aside from 2011 (friend’s 60th birthday party) and 2017 (beloved’s broken leg). Generally, the weather’s been fine, aside from 2014 when it was cold, wet and snowy. Once again, it’s great fun watching the professional peloton riding on roads we have ridden on and know well. I can almost feel myself pedalling along with them – I wish! 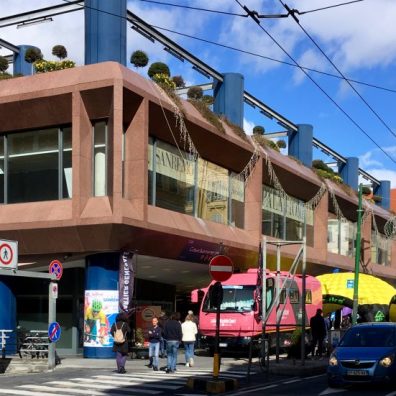 There was a full house in the press room but we’d saved our seats early on. It wasn’t quite but almost beach towels on sunbeds! There’s always much discussion as to who’s going to win and the room seemed to be equally split between Peter Sagan (Bora-hansgrohe), Julian Alaphilippe (Deceuninck-Quick Step) and the defending champion, Vincenzo Nibali (Bahrain-Merida). I really don’t mind who wins as long as it’s an exciting race.

The race winds up as it reaches the final two climbs, the Cipressa and Poggio. Riders stop casually chatting and everyone’s on high alert, favourites to the fore, keen not to miss what might be the winning break. The traditional early break comprised of riders from ProConti teams gets reeled in, riders launch attacks and counter-attacks, everyone looks around nervously, the crowds of spectators along the route grow thicker and deeper, some are even waving flares.

The bunch starts to thin out as soon as the peloton drives up the Cipressa. All back together with 25km to go, Fausto Masnada (Androni Giocattoli) was last man standing from the bunch of early escapees. Just 5km later and Niccolo Bonifazio (Direct Energie) sucks the wheel of a motorbike on the descent of the Cipressa and builds a slim advantage but he’s back in the pack well back before the climb of the Poggio. Now we’re into the last 10km and the peloton is flying.

The royal blue clad Quick Step team set the pace for the charge up the Poggio but their sprinter is well back so their efforts must be for Alaphilippe who recently won Strade Bianche. The Quick-Steppers are thinning out the bunch on the  Poggio, now it’s an EF-Drapac Cannondale rider, probably Simon Clarke, launching himself from the pack. Alaphilippe counters with 6km to go and goes straight past Clarke. Could this be the decisive move?

A whole host of favourites follow Alaphilippe’s wheel. The winner will come from this group. An Italian rider takes a flyer. Are we going to have another Italian winner after Nibali? Now they’re all eyeing one another as they hit the finishing straight on Via Roma. Some riders launch their sprints too early, but Alaphilippe times his burst for the line perfectly ahead of  Oliver Naesen (Ag2r La Mondiale) and former winner (2017) Michal Kwiatkowski (Sky). Alaphilippe falls into the arms of his soigneur, Yanky Germano, and we have tears of joy, tears of relief, and prosecco sprayed everywhere from the podium. 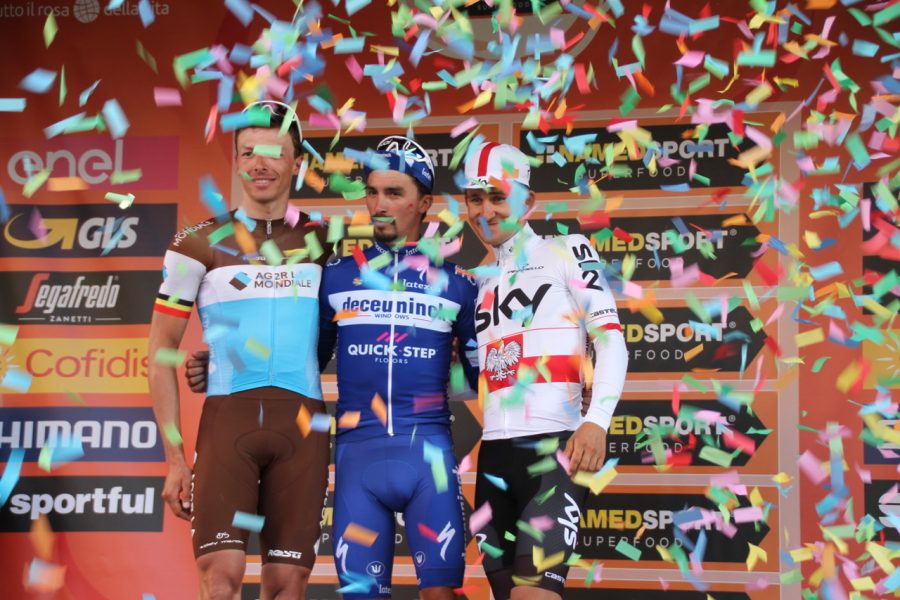 We had rather a long wait for the still-emotional winner who arrived at his press conference after a lengthy session in doping control, where he confirmed:

I came with the goal of winning this race. I’m just as proud of my win as I am of the work of my team today. What they’ve done for me is absolutely exceptional. I rode for the victory at the end bearing their dedication in mind. I recovered in the downhill after I sped up on the Poggio but I still thought it would be complicated to win considering the quality of the riders I was away with. I made a little effort to close the gap on Matteo Trentin as I knew he was very fast. Then I stayed calm and remained next to Peter Sagan. When Matej Mohoric launched the sprint, I knew I had to take his wheel straight away. Had he taken 20 metres, it would have been game over. I capped it off the nicest way I could. It’s pure joy.

Indeed, it was pure joy! We’d had a fantastic day out and topped it off at home with a small yet lavish supper with some of our Italian goodies. We’ll be doing it all again next week-end when we’re off to Turin.

4 thoughts on “Trip to Sanremo”