My potted history of Nice 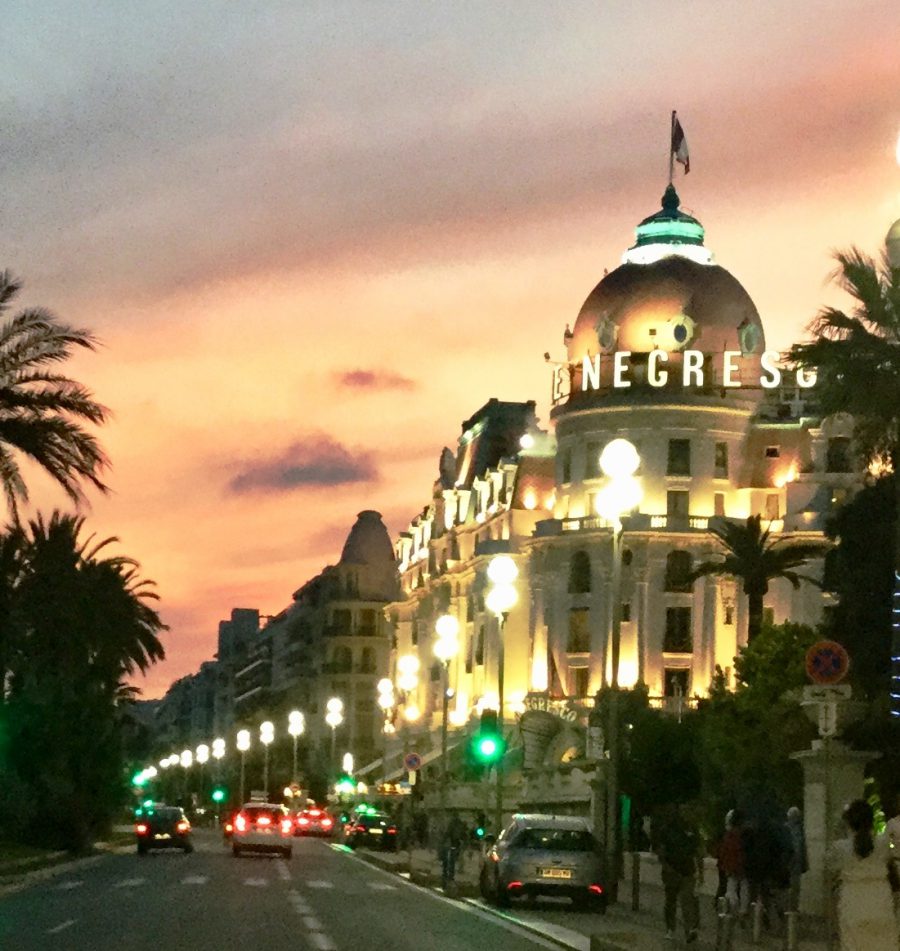 It occurred to me that before writing about my favourite places in Nice I should share with you my potted version of its long, interesting history. So here goes. 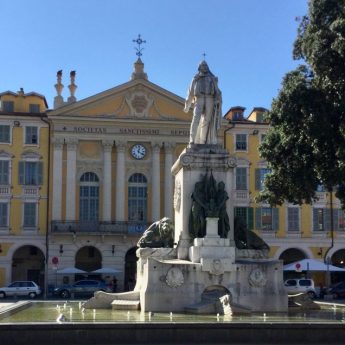 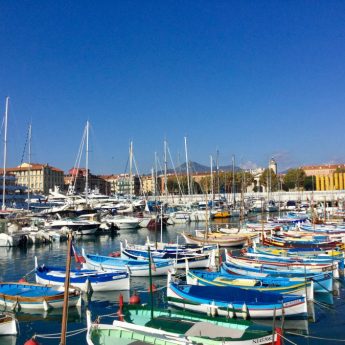 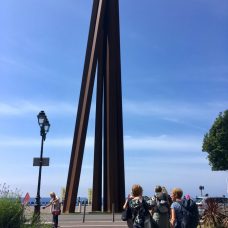 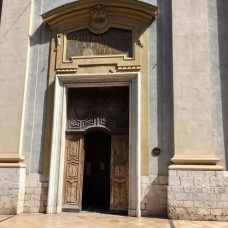 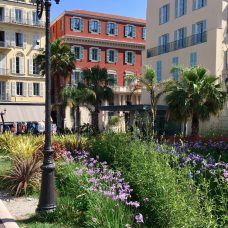 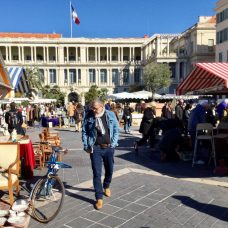 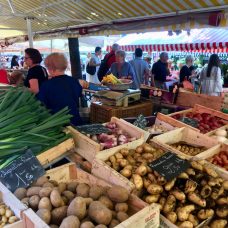 Superbly set on nothing less than the Bay of Angels, Nice has a gleam and sparkle like no other city in France. No one can resist its lively old town squeezed between promontory and sea, its markets blazing with colour, the glittering tiled domes and creamy patisserie of 19th century hotels and villas, the immaculate exotic gardens, and the famous voluptuous curve of the beach and palm fringed Promenade des Anglais. It’s the one town on the Cote d’Azur that doesn’t seem to need tourists, the one that stays open throughout the winter. You could come here for the food alone, a seductive melange of the best of France and Italy; you haven’t really had ravioli until you tuck into a plate in Nice, where it was invented.

The capital of the department of Alpes-Maritimes and France’s fifth-largest city, Nice is also the most visited French city after Paris. The English have been coming for well over 200 years, back when “Nizza la Bella” still belonged to Savoy, and Russian Tsarinas and Grand Dukes fleeing winter’s blasts weren’t far behind. The presence of so many rich, idle foreigners who stayed for months at a time formed a large part of the city’s character: corruption, reactionary politics and organised crime are part of the famous salade niçois, along with a high density of apricot poodles sporting the same hairstyles as their owners. But Nice also has a football team, a university, many museums, the brilliant light so-beloved of Matisse and a genuine identity as a city: rough, affable and informal.

Nice has long been a property hot spot. People have been taking advantage of its prime real estate for many, many years. 400,000 BC, hunters who tracked mammoth and frequented the caves of Terra Amata (now the site of Boulevard Carnot, to the east of the Port) learned how to make fire to BBQ their prey and founded the world’s first take-away – McMammoth’s. Indeed, the first human remains dating from c 1,000,000 BC were found up the road in Menton leading one to conclude that the Cote d’Azur was indeed the Garden of Eden, as only a French woman would have the figure and chutzpah to wear a fig leaf. And, contrary to popular belief, she didn’t want the apple to tempt Adam; she needed it to make a tarte tatin.

Around 1,000 BC, the Ligurians were the first to settle here permanently, constructing their settlement at the mouth of the Paillon River and on the hill overlooking the valley. Greeks from Marseille, (the Massaliotes) founded a commercial colony near the seaside settlement and named it Nikaia, literally “giver of victory”. The beginnings of the new town were established on the slopes of the Colline du Chateau, overlooking and between the present old town and port. At this time, Nice was a small stronghold, with a few hundred inhabitants, mainly merchants, under the authority of magistrates nominated by Marseilles.

Beset by Ligurian pirates, the Nikaians (foolishly) asked the Romans for aid. The Romans duly came, and stayed. But they preferred to set up camp on the hilltop because it was closer to the Via Julia Augusta, which linked Nice to Vintimille. They named this town Cemenelum (modern Cimiez) and made it the capital of the province of Alpes Maritimes. By 3rd century AD, Cemenelum had 20,000 inhabitants and three thermal baths. The city was a military enclave intended to supervise and control this accident-prone and wild country. But the disorganisation of the empire, the barbarian invasions and the absence of fortifications led to a preference for the steep hills of Greek Nikaia. By 6th century AD, Cemenelum had collapsed along with the rest of the Roman Empire and became a mere neighbourhood of what was later to become the city of Nice. 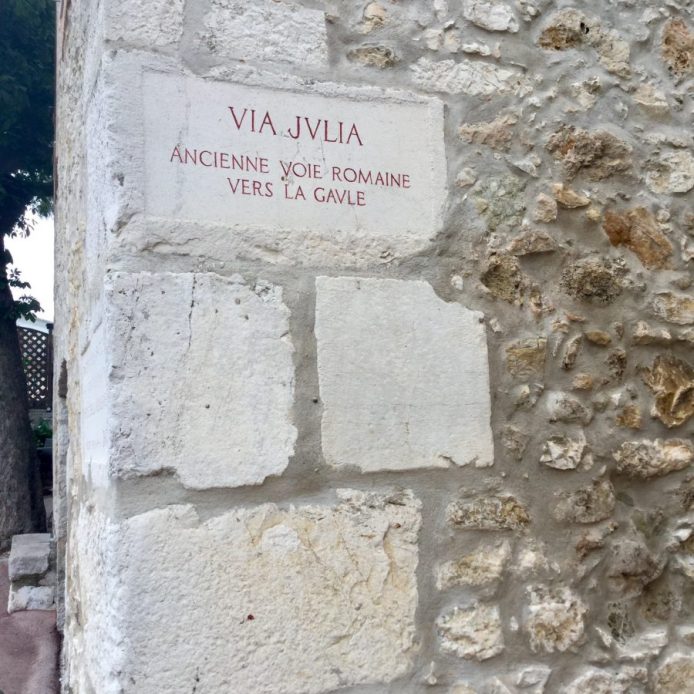 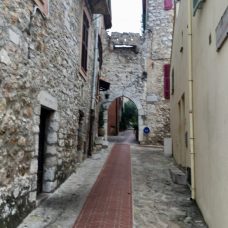 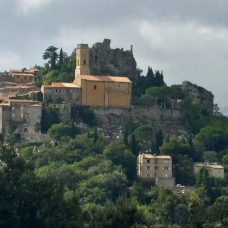 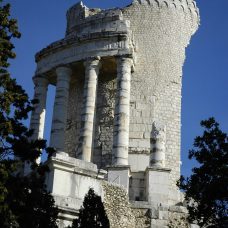 While almost no traces of the Massaliotes remain, the Romans left many reminders. Not just the afore-mentioned Via Julia Augusta, but also the Trophée d’Auguste. It’s a magnificent construction with four well-preserved columns, which offers a great panorama at La Turbie and symbolises the submission of the Alpine peoples to Roman rule in 14 BC. Emperor Auguste can also be credited with setting up the region’s first real administrative organisation. Finally, the most manifest remains of the Roman presence in Nice are the well-preserved Roman amphitheatres and baths around the site of Cimiez’s Archeological Museum.

Meanwhile, Greek Nikaia struggled on, shaken by the family rivalries of its successive nobility, exhausted by the multiple invasions of the Goths, Francs, Saxons and Saracens which ravaged Nice and pillaged the coast for 150 or so years. It was only in 972 AD that Guillaume, the Compte de Provence, managed to rout them. The commercial activity of the lower town intensified around the cathedral on the Colline du Chateau and in 1176 the first town charter was drawn up.

The creation of the port of Villefranche [sur Mer] made the coast safer and encouraged maritime exchanges. Nice became much sought after by the Italian States, notably Genoa and Pisa. By the 1340s, with a population of 13,000, Nice was the third city in Provence after Marseille and Arles. The city’s coat of arms had an eagle’s head on it, looking to the left, to France.

On the death of Queen Jeanne of Provence, rivalries worsened, the Black Death and civil wars soon cut it down in size, and in 1388 the city’s leaders voted to hitch their wagon to a brighter star than Louis d’Anjou and pledged allegiance to Armadeus III, Count of Savoy. The eagle was redrawn to look right towards Italy.

In 1543, the Turkish fleet, aided by the French troops of King Francois I, tried in vain to reconquer the city. Local washerwoman turned symbolic figure Catherine Ségurane used a particularly unusual form of defence. Legend has it that she lashed out with a carpet beater to send them running while showing them her very ample, bare derrière!

The Savoys fortified Nice and it grew rich trading with Italy and 17th century saw the expansion of Nice outside its medieval walls, and in 1696 and 1705 came the first of several French interludes that punctuated Savoy rule; interludes which Louis XIV took advantage of to blow up the city’s fortifications. In 1713, the town again retreated to the protection of the King of Savoy, who had also become King of Sardinia.

The 17th century also witnessed the flourishing of baroque art in Nice. Façades were painted in warm reds and yellows, ochre and burnt sienna; doorways and window sills were given contrasting colours and the woodwork was painted in cold blues and greens. The restoration of the façades over the last few decades has returned Nice to her former baroque glory. Other striking examples of this artistic tradition are the churches of the old town, such as Cathédrale Sainte-Réparate.

Between the French Revolution and the Empire (1792-1814), the Alpes-Maritimes region was created and annexed to France. By the same token, Nice was also returned to the French, but this time with the assent of the people.

With the fall of Napoleon, Nice again came under the sway of Sardinia, but her language and culture distanced her further and further from Italy. On the 24th March 1860, Napoleon III and Victor-Emmanuel II, King of Sardinia, agreed that Nice would be handed over to France once and for all, a decision that met with universal approval from its inhabitants. A remarkable economic boom ensued; roads were built, the railway arrived, and the population underwent explosive growth.

At the same time, winter tourism, which had started to develop in the mid-1700s with the arrival of the British aristocracy, gathered ground. Even though it took at least two weeks to reach Nice from Calais, by 1787 there were enough Brits wintering here to support a casino, an English theatre, an estate agent and a newspaper. In 1830, when a frost killed all the orange trees, the English community raised funds to give the unemployed jobs: building a seafront promenade along the Baie des Anges known to this day as the Promenade des Anglais.

The latter part of the 19th century and the run up to the First World War was Nice’s heyday, to which the prolific and luxurious belle époque residences attest. It really was the playground of the rich and famous.

The early 20th century was deeply marked by the First World War and the Rural Exodus. Although southern France saw no action in WWI, soldiers were conscripted from the region and many lives were lost. In the 1920s the region once more became a mecca for artists and writers (including Ernest Hemingway, F Scott Fitzgerald, Aldous Huxley and Thomas Mann). The luxurious Train Bleu made its first run from Calais, via Paris, to the Côte d’Azur in 1922.

Nice was included in the ‘free’ Vichy France zone during the first part of WWII, and became a safe haven from war-torn occupied France. Vichy France was invaded by Nazi Germany in November 1942, and Nice was occupied by the Italians. Allied forces landed on the Côte d’Azur in August 1944, and the region was liberated. It didn’t take Nice long to bounce back, and the bohemian jet set soon returned. The resort is now an all year round holiday spot and tourism is a vital and fundamental part of the local economy, a fact borne out by the airport (the second largest in France), and the vast array of hotels, holiday homes and yachts.

24 Comments on “My potted history of Nice”