When my beloved told me we were visiting the home town of one of his new clients, Rivarolo Canavese, I thought it sounded like a full-bodied red wine. But no, it’s a wonderfully historic town just 30 minutes north-east of Turin.

We drove there on a glorious Friday morning when all along the motorway the trees were just starting to show off their new lime-green finery and pale-blossoms. The crops in the farmers’ fields were showing early emerald shoots, lambs were gambolling and cows were lazily chewing the grassy green cud. This was all set against a backdrop of mountains still dusted with snow. Spring had most definitely sprung.

A bit of research revealed Riverolo’s ancient name of “Riparolium” means “place on the bank of the stream.” You can clearly see the “stream” in the map of the town below. In December 1862, shortly after the Unification of Italy, it was renamed Rivarolo Canavese to distinguish it from other similarly named towns in neighbouring Lombardy and Liguria.

Riparolium is first mentionned in an old document dating back to 1000 AD. From 1200 it belonged to the families of the Counts of Valperga and San Martino. The town’s  original early medieval core was enlarged in 13th century with a comb-like urban layout and walls. In 1358 the Counts of Savoy granted partial autonomy to the town in respect of the management of its ovens and mills. Mid-18th century the town’s medieval fabric was remodelled in a Baroque style. In 1863 Rivarolo achieved city status thanks to its socio-economic growth  and the construction of a rail link to Turin.

Nowadays Rivarolo sits at the centre of an efficient road and rail network linking it with Turin, its airport and the rest of the Canavese region. The town’s former activities in textiles and leather production have downsized but become more upscale with the presence of numerous artisan businesses.

The city’s main axis is a wide road (Corso Indipendenza) featuring a number of interesting 19th century buildings, such as Casa Pistono, Casa Maspes, Villa Recrosio and Villa Vallero which houses exhibitions, cultural events and educational activities and is surrounded by a public park. On week days there’s a small food market, largely fruit and vegetables, which morphs into a footwear and textiles one on Saturday mornings. 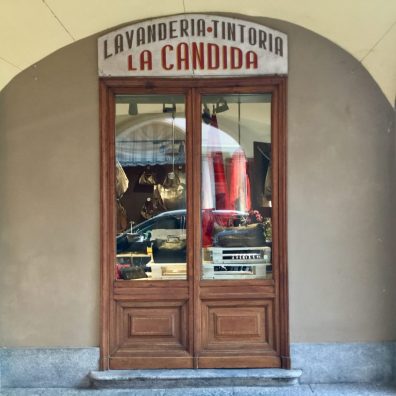 Given its interesting history, there’s plenty to see, particularly in its Old Town which spreads around the arcaded via Ivrea and features a number of former palaces: Palazzo Palma di Borgofranco, Palazzo Farina, Palazzo Toesca and Palazzo Lomellini, now the Town Hall. There’s also some really beautiful old shop fronts, many of which are still used for their original purpose. 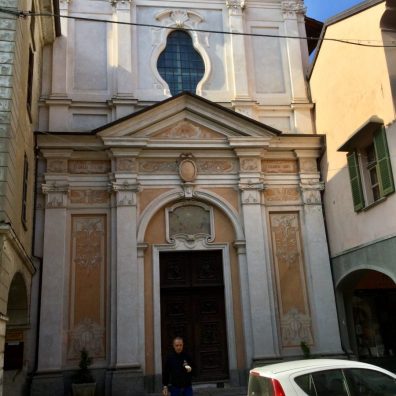 Along this same street, there are also three churches the most spectacular of which is the octagonal, brick-built Baroque church of San Michele Arcangelo which dates back to 11th century, with 18th century additions.  Practically, opposite one another you’ll find the Church of the Confraternity of Jesus which has an elegant painted façade with a large wooden door and the Church of San Rocco and San Carlo which was built by the community after it had been devastated by the plague in 1630.

The town also has its own castle which I spied in the distance. Malgra Castle was built by the Counts of San Martino in 1333. It was renovated, at the end of 19th century by the architect Alfredo D’Andrade. In the inner courtyard there is a crenellated tower and a small portico with 14th century frescoes. Owned by the municipality since 1982, you can only visit it on Sunday afternoons from May to October.

After pounding the cobbled pavements in the town, I checked out its splendid coffee and cake shops, all in the interests of research you understand. Later when my beloved had finished work for the day we were able to sample the town’s offering of our favourite pre-dinner tipple, an Aperol Spritz, before a delicious dinner with his client.