When we first looked at properties to buy on the Cote d’Azur we quickly found a charming house in La Colle sur Loup, a pretty village just down the road from Saint Paul de Vence, which seemed to fit the bill. We pondered long and hard but eventually decided against it as it was a corner property, without a view, on what has become a much busier road. However it’s one of our neighbouring villages, home to one of our favourite restaurants, we enjoy visiting its Jazz evenings during the summer and its other festivals throughout the year.

I few months back I’d spotted it was having a Franco-German festival which we decided to visit. The festival – someone selling vin chaud and bretzels- was a decided let down, but it was fun to reaquaint ourselves with this tranquil and charming place, enjoy coffee and cake in one of its many cafes, plus purchase fruit and vegetables from its Saturday market stall.

A former medieval community, La Colle sur Loup was home to a feudal lord in the 16th century. Consequently, there are plenty of buildings of historical significance such as a 12th century Canadel priory now converted into a restaurant (L’Abbaye) which still has a fortified gateway, corner towers, cloisters and a listed Romanesque chapel. Plus, at the entrance to the village, you’ll find its 17th century Eglise de Saint Jacques Le Majeur which has wonderful stained glass windows and a square bell tower. The place also boasts 16th century Chateau de Montfort and Le Gaudelet, a hunting lodge with a Renaissance facade from the same era. 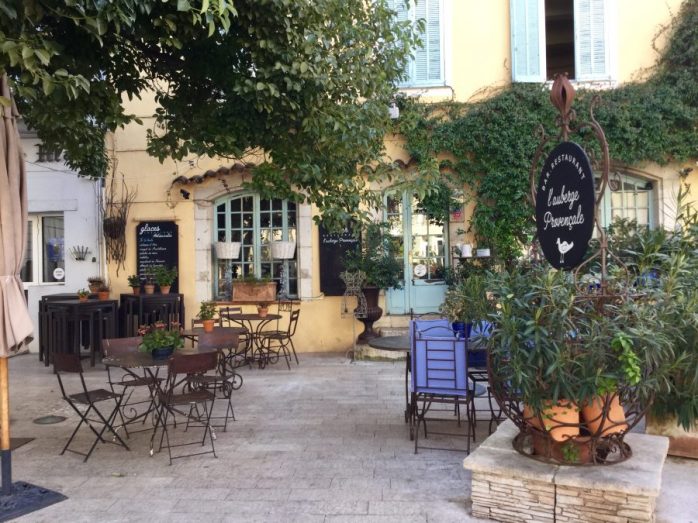 I like to wander through the village’s historic centre, with its narrow alleyways and lively shopping streets, which has shady little squares with fountains and honey-coloured stone buildings with wonderful carved doors. Formerly renowned for its production of rose perfume – celebrated annually with its Fetes des Roses –  today it’s better known for its antique dealers and decorators, and also for its fine restaurants. In addition, the village has always attracted artists and artisans, such as Yves Klein, the founder of the New Realists, who is buried here, Jacques Ferrandez the well-known cartoon strip artist, the architect Yves Bayard and Raoul Giodan, another cartoon strip artist.

Lying on the river Loup, the village’s surrounding forest is one of its greatest attractions, providing an oasis of cool and peace in the summer months. Activities abound, it’s a mecca for outdoor ones. You can ride horses, cycle, kayak, canoe, hike or fish for trout- or just spend the day with a picnic – you know how the French love to picnic – in one of its two public parks. There’s also a children’s amusement park and a local sports ground.  It’s well worth a visit, perhaps combined with a trip to neighbouring Saint Paul de Vence.

← What a lovely surprise!
The Musette: sticky ribs →