Postcard from the Blue Mountains

A mere three hours drive from Sydney, the Blue Mountains are easily accessible by car, or via a dramatic scenic helicopter flight. We opted for the former – we should’ve gone for the latter, but that’s a whole other story – to reach our home in the Wolgan Valley where we were anticipating much cooler temperatures than in Sydney. Daytime temperatures of just 10 – 15°C, though at night, at this time of the year, these temperatures can drop to as low as -3°C. Consequently, we’d packed anoraks, stout walking shoes and cashmere.

According to the ‘blurb, the Greater Blue Mountains is an accessible wilderness, covering more than one million hectares of rainforest, canyons, eucalypt forests and heath lands in New South Wales. It’s an area of breathtaking views, rugged tablelands, sheer cliffs, deep valleys and swamps teeming with life – none of whom I suspect I would wish to meet! The unique plants and animals that live in this outstanding natural place relate an extraordinary story of Australia’s antiquity, its diversity of life and its superlative beauty. It really is a nature lover’s paradise with an abundance of colourful bird and animal life, the greatest concentration of eucalypt diversity on the continent, and landscapes ranging from rainforest to heathland.

More than 400 different kinds of animals live within the rugged gorges and tablelands of the Greater Blue Mountains. These include threatened or rare species of conservation significance, such as the spotted-tailed quoll, the koala, the yellow-bellied glider, the long-nosed potoroo (what a fab name), the green and golden bell frog and the Blue Mountains water skink. Flora and fauna of conservation significance and their habitats are a major component of the World Heritage values of the area. 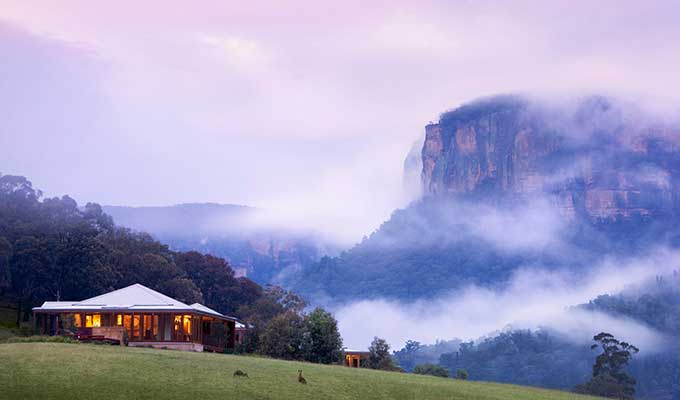 Well, the Blue Mountains more than lived up to its reputation and, thanks to the guides where we were staying, I now know and understand a lot more about the important conservation work that’s  being undertaken in the area.

Wolgan Valley is the world’s first carbon neutral resort, set amid 7,000 acres, nestled between two national  parks within the UNESCO World Heritage site. Spread out in a valley at the foot of towering cliffs, the resort has an admirable commitment to broader social, ecological and environmental sustainability.

It was a a wonderfully relaxing stay and we particularly enjoyed getting up close and personal to the resort’s abundant wildlife, particularly its 5,000 strong herd of kangaroos, wallaroos and wallabies, its comical, camera-shy wombats and its many noisy birds. All too soon our stay – more of which later – was over and we were driving back towards Sydney, and the next leg of out Adventure Down Under.

53 Comments on “Postcard from the Blue Mountains”