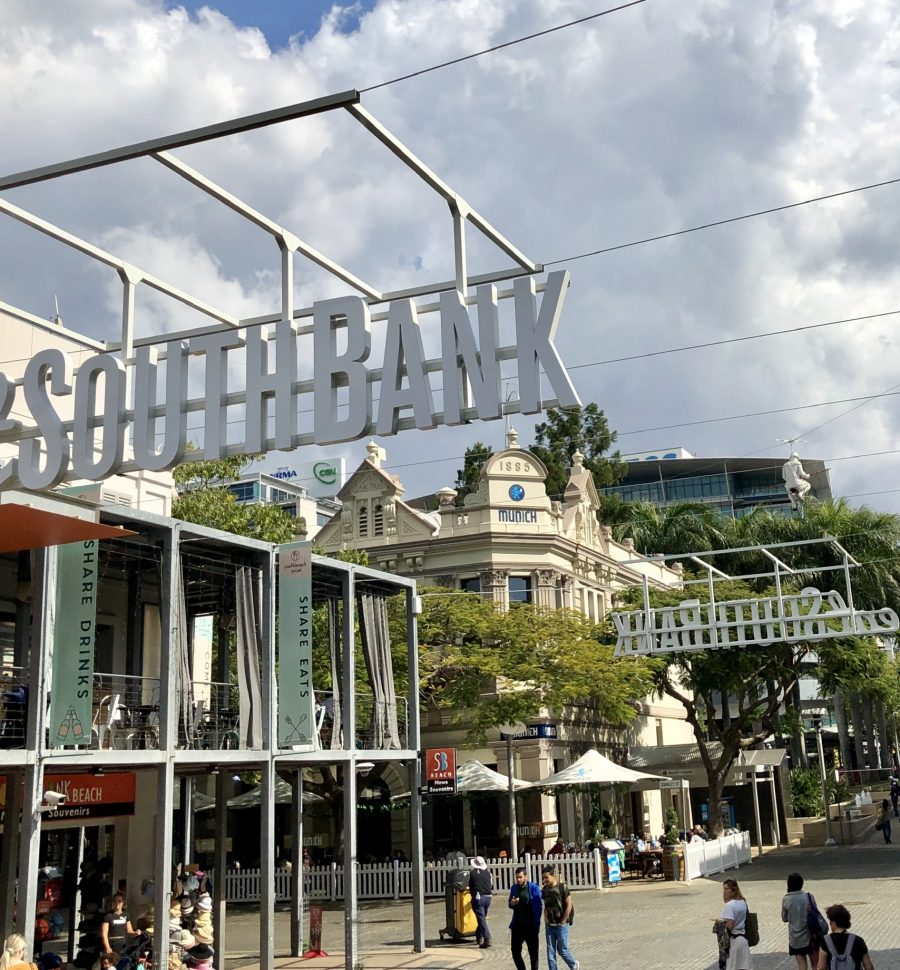 Unbelievably, yesterday’s post only covered the morning of our second Wednesday In Brisbane. You may recall that the raison d’etre for our visit to this fair city was attendance at a major Dental Congress. We had to set up the company’s stand on this Wednesday afternoon, before the congress started the following day. Consequently, we headed over to the South Bank for lunch. I wanted to check out the restaurant I’d booked for a dinner my beloved was hosting on Thursday evening. It was easy to find and being Italian was sure to please everyone. Who doesn’t like pizza and pasta? Exactly!

Having walked all around the many restaurants, we decided to eat in a Middle Eastern one which is always great for my regime. Lunch over we headed to the exhibition centre to set everything up. This fortunately took next to no time leaving us plenty of time to further explore Brisbane’s 17-acre parkland on South Bank which was opened to the public in 1992 on the former site of World Expo 88. 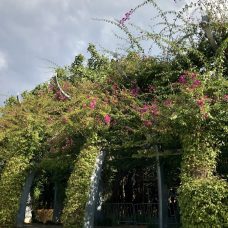 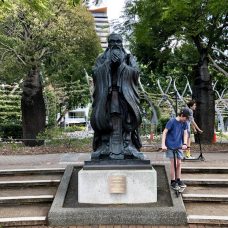 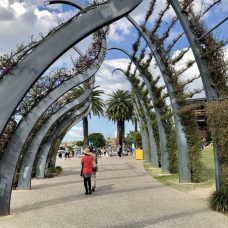 South Bank’s promenade stretches along the Brisbane River, from the north to the south end of South Bank Parklands and up to Kangaroo Point. It includes the delightful Arbour, a kilometre-long steel canopy covered by neon pink and purple bougainvillea flowers. The award-winning structure is made up of 443 curling, galvanised steel posts. 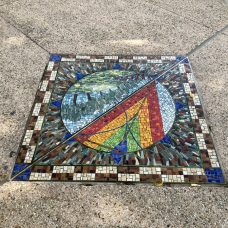 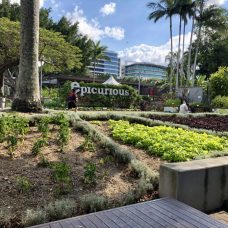 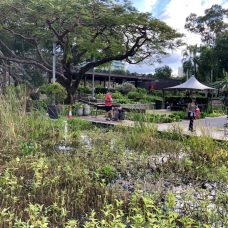 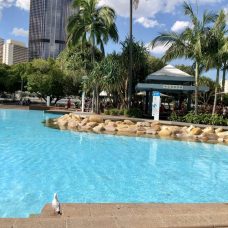 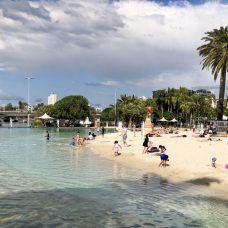 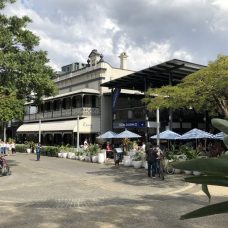 We strolled along Clem Jones Promenade beside the river in the warm sunshine, visiting the Epicurious Garden filled with lots of lovely edibles and stopping to admire Streets Beach. Brisbane may not be on the coast but its year-round summer weather means it has a beach and swimming pools in South Bank which are free! Streets Beach provides a little hit of Paradise and a place to cool off for everyone. 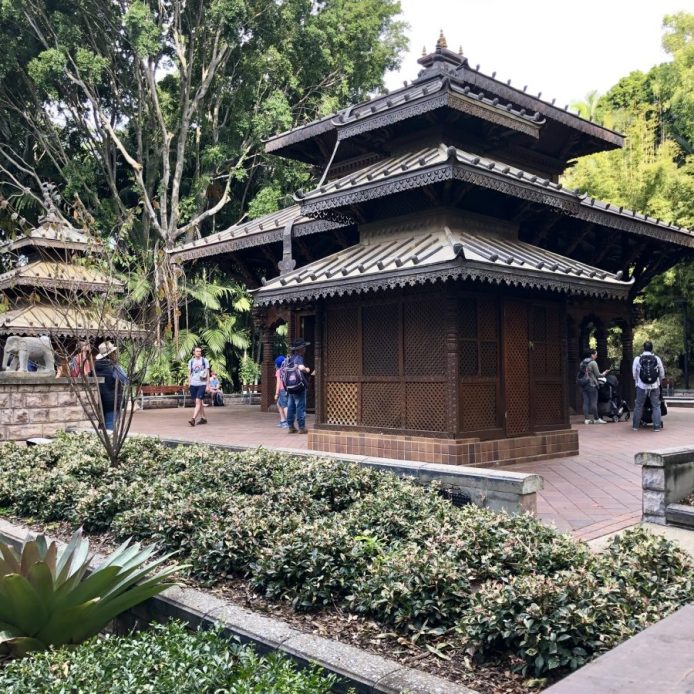 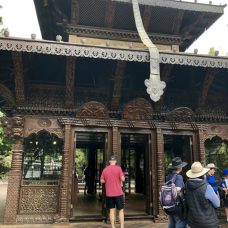 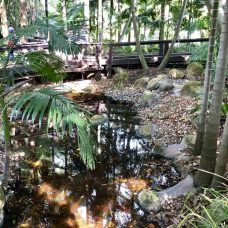 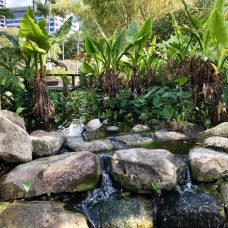 There’s also an area of rain-forest within which is a relic of the World Expo ‘88 and now one of the South Bank’s most esteemed attractions. The Nepalese Peace Pagoda was originally brought to Brisbane as the Kingdom of Nepal’s contribution to the Expo. The structure had been handcrafted over a two year period, using 80 tonnes of hard-carved Terai timber from the southern jungles of Nepal and employing the services of 160 Nepalese families. 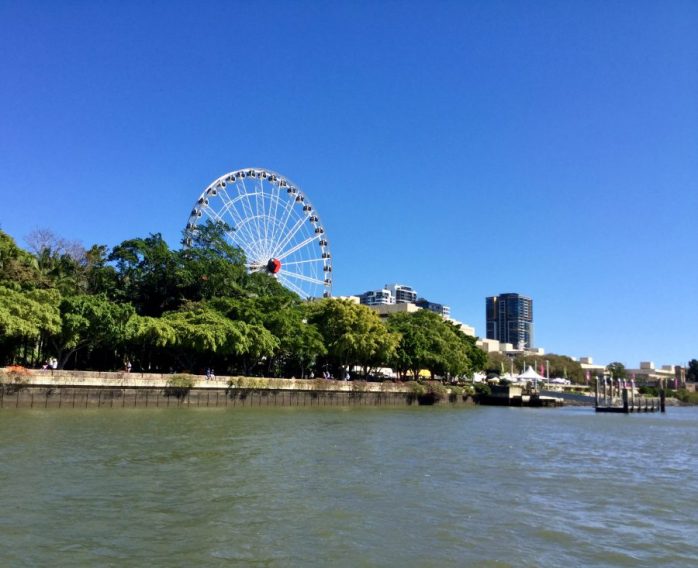 Of course, no modern playground is complete without a large ferris wheel. The Brisbane Wheel is  60-metre (197 ft) tall and was erected in August 2008 to celebrate the 20th Anniversary of  World Expo 88 and Queensland’s 150th Anniversary (1859-2009). It carries 42 gondolas on a 15-minute ride with panoramic views of the river and city. We passed on this delight.

Thursday morning we were up early and looking bright-eyed and bushy tailed at the exhibition. I lent my beloved a hand until lunchtime when reinforcements arrived. This liberated me to continue exploring South Bank, specifically The Queensland Art Gallery and Gallery of Modern Art where I happily whiled away the afternoon. 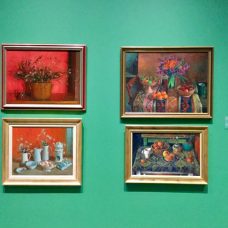 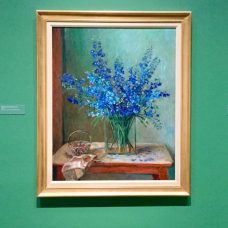 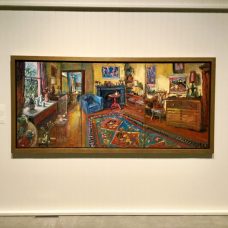 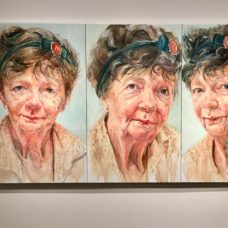 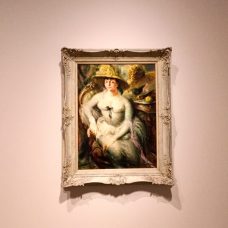 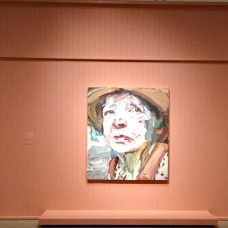 I much enjoyed two related but quite different exhibitions of artists whose work I’d never before seen. The first entitled “A Generous Life” celebrates the enduring legacy of much-loved Australian artist Margaret Olley (1923–2011). A short documentary revealed a fascinating and charismatic character, a widely recognised still-life and interior painter who drew inspiration from her home and the beauty of everyday objects. She was a significant benefactor to public institutions, and the subject of two Archibald Prize-winning portraits including one (above) painted by Ben Quilty (2011). This major exhibition profiles a life that was vigorously immersed in art — her own and that of those she supported.

The second featured the afore-mentioned Ben Quilty one of Australia’s most acclaimed contemporary artists, whose thickly painted landscapes and intimate portraits have garnered international acclaim. Exploring themes of masculinity and mortality, Quilty’s work is influenced by his experiences of Australian culture, political activism and his position as an official war artist. Working in a highly expressive style, he delves into the hidden psychologies of people and places through a bold application of paint to produce thought provoking pieces. 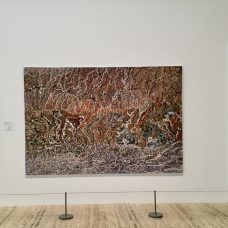 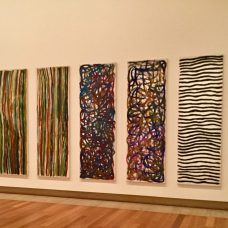 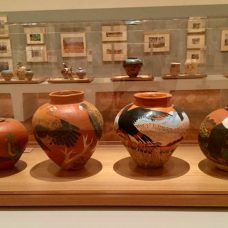 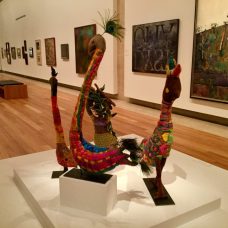 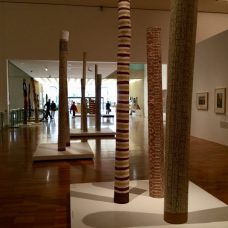 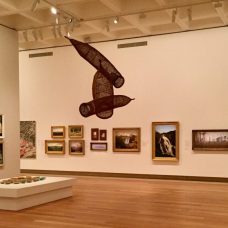 As anticipated, there were also many works from indigenous artists, and some from further afield, displayed in wonderful light-filled, airy spaces. Footsore but happy, I wandered back to our hotel clocking up another 16km (10 miles) in total for the day.

30 Comments on “Postcard from Brisbane IV”