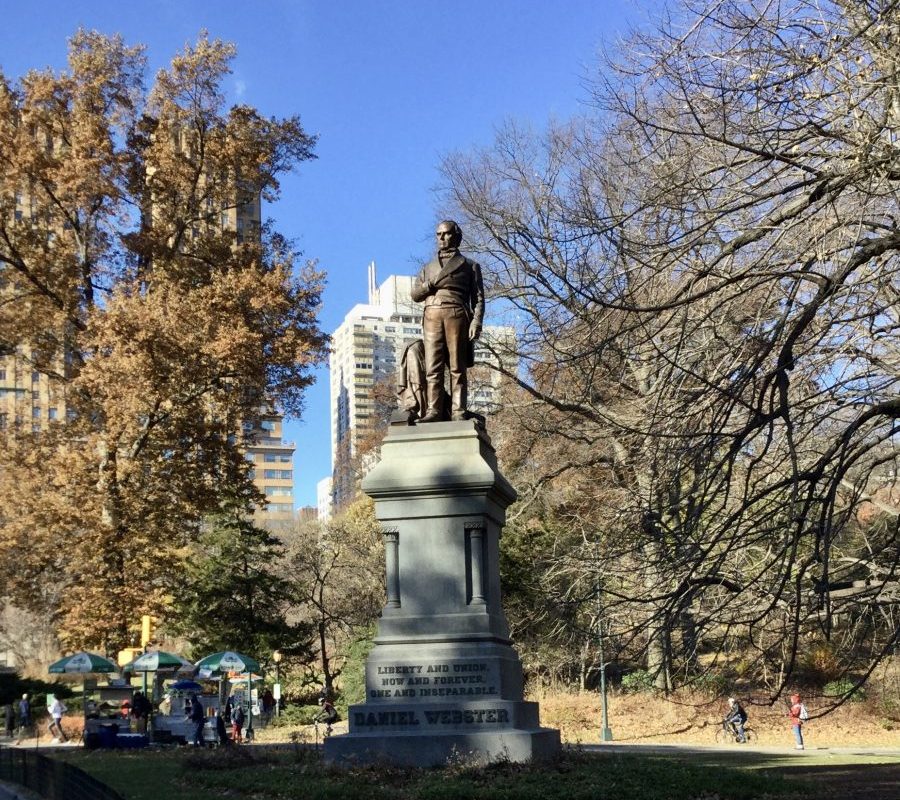 You may recall we’re in New York after enjoying our maiden Thanksgiving on Long Island. My beloved left early on Monday morning for a jam-packed day of business meetings, while I enjoyed a leisurely coffee before venturing out. I was well muffled up as rain which subsequently turned to snow had started to fall. I was heading for a lunchtime meeting with a fellow blogger.

Given the weather, it might have been more advisable to get the Subway but I didn’t mind the walk, 30 blocks along Amsterdam and past the Lincoln Centre where we’d entertained German clients many years ago at a Mexican restaurant. This turned out to be a huge mistake as they didn’t enjoy spicy food – their loss! I arrived at our restaurant rendez vous ahead of the appointed hour, secured a nice corner table and thawed out over a cup of coffee.

You know how it is? You meet someone for the first time and just click. Over a lazy lunch – more lobster for me – we chatted about anything and everything, particularly places we’d both visited. Time just flew and regretfully, as the light started to fade, it was time to leave. After walking a few blocks, we parted to head back respectively to home and hotel. It had been so kind of her to come out and meet me in that horrendous weather.

As I’d walked up Amsterdam Ave, I walked back along Columbus. Having been treated to a delicious lunch, I needed nothing more than a small snack for dinner while I enjoyed watching Toy Story IV. My beloved returned late after a dental association dinner. He’d had two, long and exhausting business days.

The following morning we were due to visit MoMa but my beloved wanted to show me Hudson Yards which is adjacent to the Javits Convention Centre where he’d attended the dental exhibition. We walked 20 blocks down 10th avenue until we reached the new, and as yet to be completed, Hudson Yards development between the Highline and Midtown. It had stopped snowing but was rather slippy underfoot. 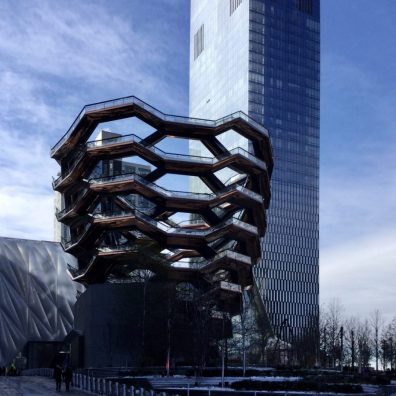 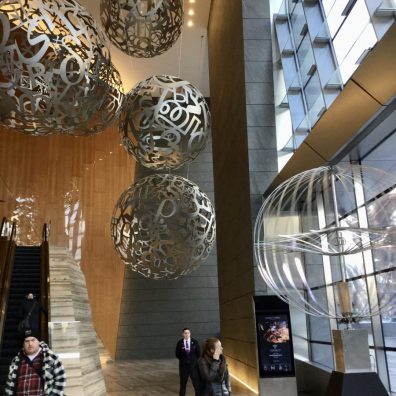 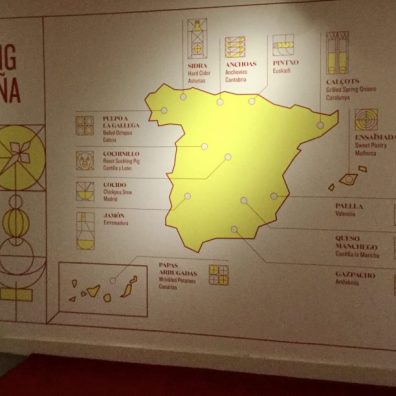 It’s a lovely development choc full of high end shops and restaurants, overlooked by high rise offices and residential with spectacular views of the Hudson River. The wind chill factor ensured we didn’t tarry too long outside, happy to dive into the shopping mall and explore its myriad of layers. I declined to climb The Shed (top left) to get a better view of the overall development!

After a coffee in the Bouchon Bakery, we descended to Little Spain in the basement which, as its name suggests, is a Spanish gastronomic experience and where my beloved had lunched the previous day. 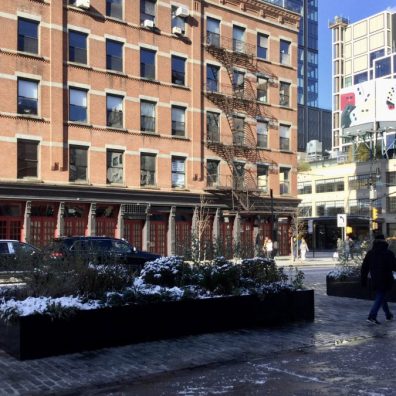 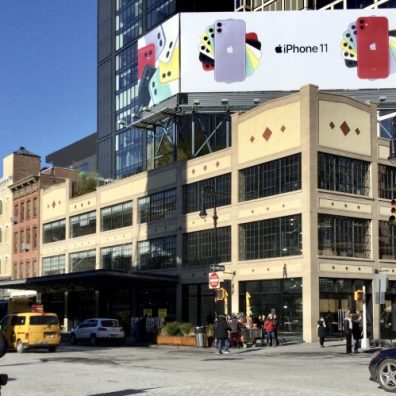 We emerged into the bright sunshine and continued our amble down to the Meat Packing District. My beloved and I recalled that many years ago I’d bought a dress from one of the shops here to wear at my younger sister’s wedding. Sadly on the day, I’d had a bit of a problem and ended up wearing something else entirely!

As we were in the ‘hood I thought we might visit the Whitney but I’d forgotten that it’s closed on a Tuesday – epic planning fail. We zigzagged back up to Midtown taking in a number of the sights and generally just window shopping – much my favourite sort of shopping. We skipped lunch in favour of an early dinner at a nearby Burger Bar where I’d reserved a table as the queues were ginormous everytime we’d gone past. The restaurant was deserving of its queues. 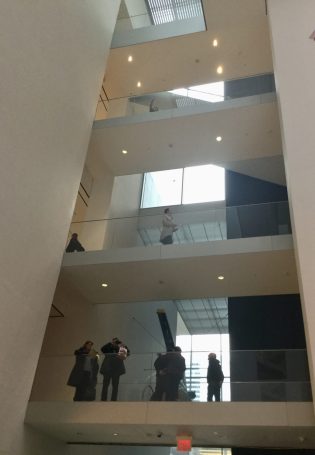 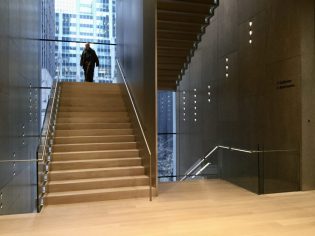 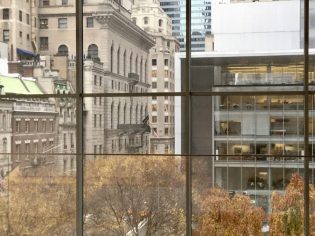 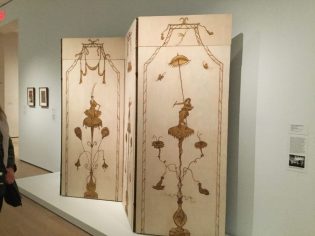 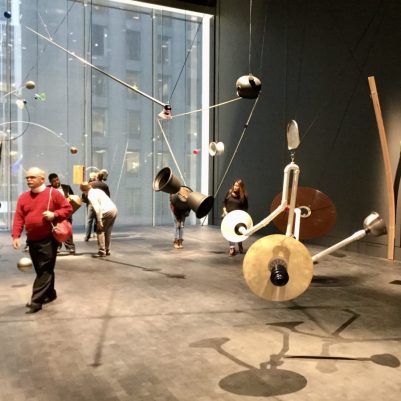 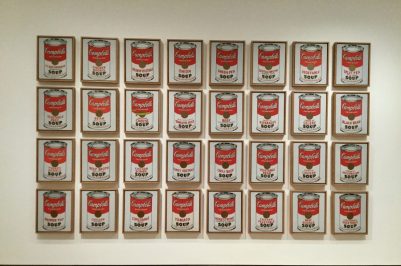 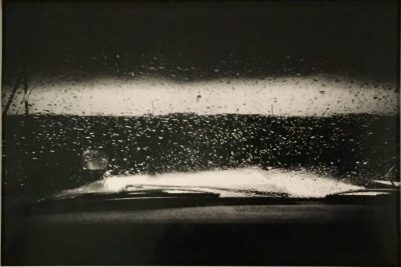 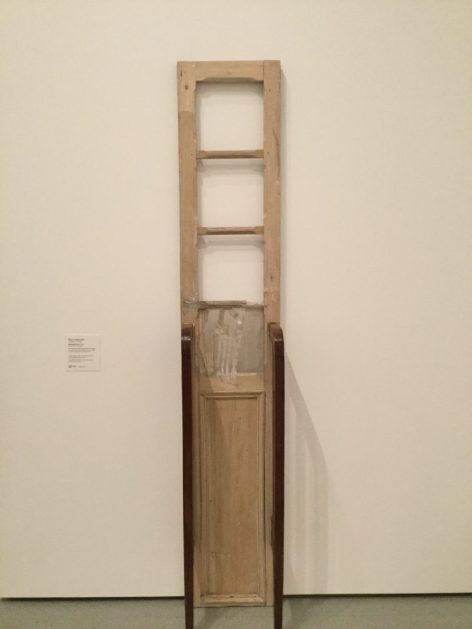 On our last day in New York we spent our time wandering around MoMa (Museum of Modern Art) just a couple of blocks from our hotel. Starting on the fifth floor we slowly wound our way through most of the galleries which were arranged mostly in a loose chronological order, each of them exploring an individual topic. Some were devoted to a particular artist, others to a specific medium or discipline, a particular place in a moment in time or a shared creative idea.

Not all were necessarily to our taste but MoMa’s presentations are always enlightening. Again, it’s interesting to see how many works were donated and each gallery bears someone’s name(s), many of them familiar patrons of the arts. I spotted a piece by Colombian visual artist and sculptor Doris Salcedo, recent winner of the Nomura Art Reward, whose works exhibited a few years ago at the Guggenheim had so traumatised my beloved.

I appreciate that her work isn’t for everyone and it can rarely be hung on your living room wall. Much of her work deals with the fact that, while the death of a loved one can be mourned, their disappearance leaves an unbearable emptiness.

However, Doris aside, there were plenty of other works to admire not least the architecture of the building itself. We had a hasty late lunch in a Tanqueria opposite the hotel before speeding back to Newark and our flights home. On red-eyes I follow a well-established routine. Glass of champagne, eye mask, cashmere shawl, my “Do Not Disturb” notice, seatbelt, skip dinner and sleep. I awoke just as we were coming into land at Heathrow and enjoyed breakfast in the BA lounge before heading back to Nice.