Another trip to Aix-en-Provence 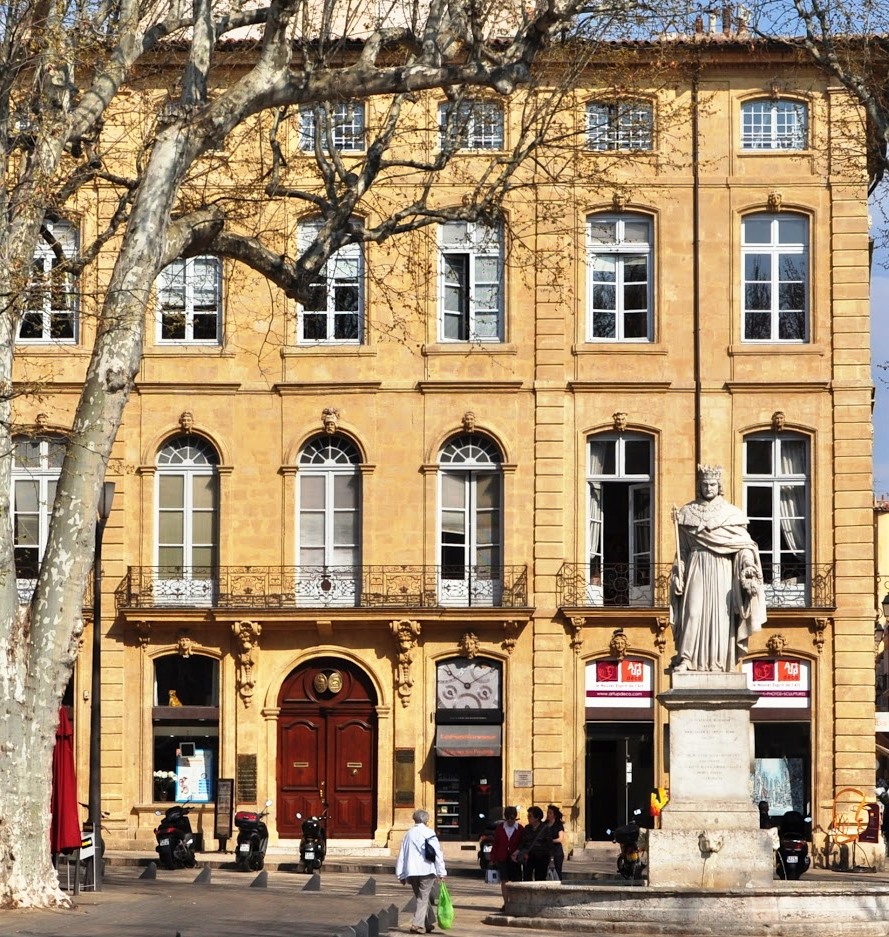 A few weeks ago my beloved met one of his business contacts in Aix-en-Provence, a well known favourite of ours which we’ve previously visited many times. I went along for the ride as I love wandering around its honey-hued, cobbled streets. This time I thought I’d take a closer look at its many fountains, not for nothing is it known as the City of a Thousand Fountains.

The Romans – those boys were everywhere – called Aix, Aquae Sextiae (The Waters of Sextius) once they discovered its natural thermal water source and installed their Roman baths.

After the demise of the Roman empire, Aix was known as a city of many fountains though I doubt that there are indeed 1,000 of them. The fountains come in all shapes and sizes and, historically, the locals had many uses for them. 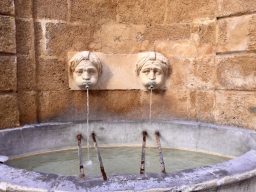 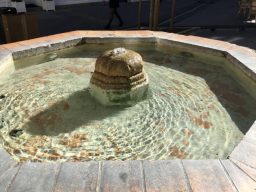 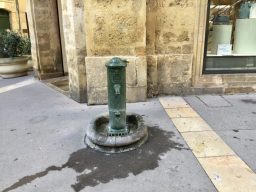 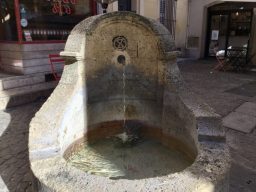 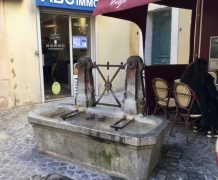 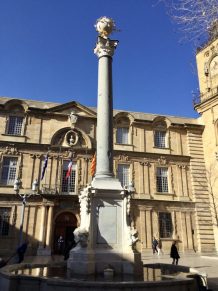 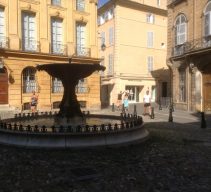 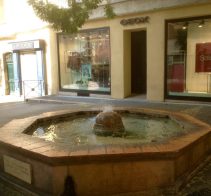 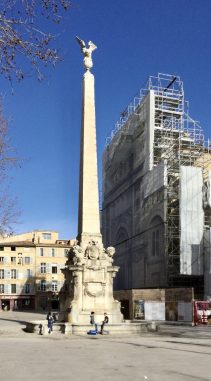 Wandering around I realised that pretty much every street or junction has a fountain of sorts. But, don’t worry, I’m not proposing to cover all of Aix’s fountains, just the main ones starting with the most iconic.

The most well-known of Aix’s fountains and certainly the most imposing is the Rotunde fountain in the centre of the town. The fountain’s construction in 1860 marked a turning point because not only were its dimensions exceptional but it was also the first with a cast iron basin. 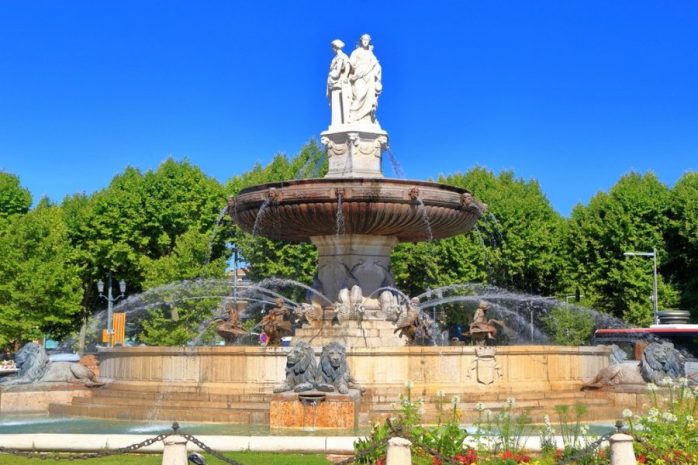 The three statues atop the fountain reference the town’s main pursuits of justice, agriculture and fine arts.  At the time of its construction, the fountain was a symbol at the entrance to the modern town, which had neither ramparts nor gates and was open to the world. Indeed, the town has grown up around the fountain.

The Rotonde features heavily in the town’s activities. The regular markets start here before winding their way up the town’s main boulevard, Le Cours Mirabeau which, thanks to its many bars and restaurants, is always a hive of activity. 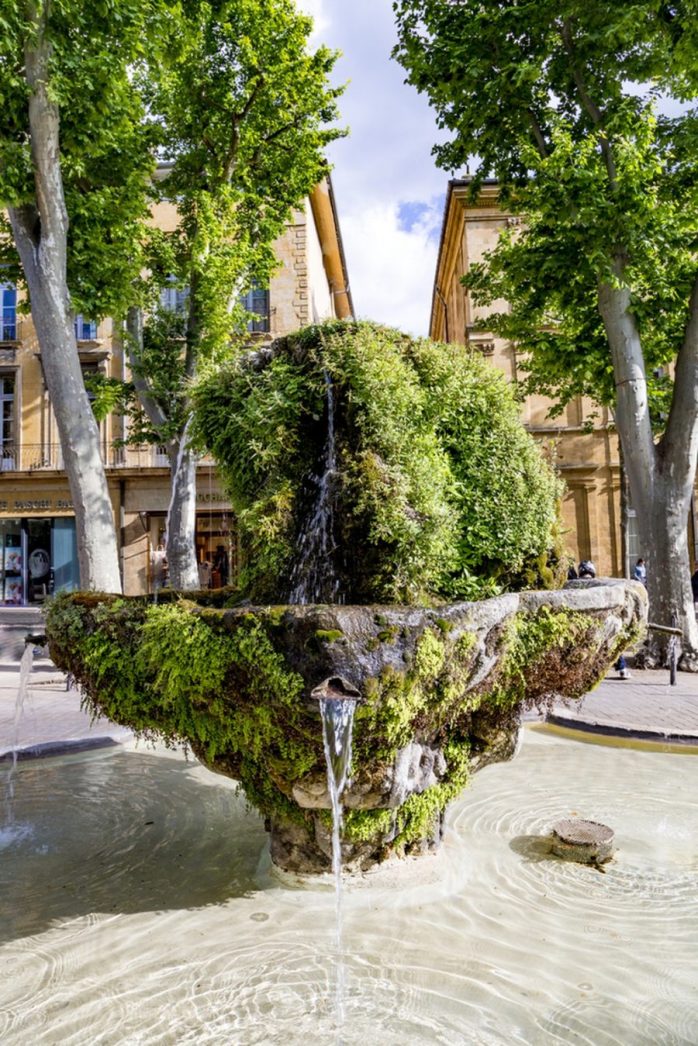 Moving my way up the Cours Mirabeau, I come to this moss fountain, the first one built in the Cours in 1667. Its water source is natural (from the Bagniers spring), so the water is warm. Its unique vegetation has built up over decades and botanists are attracted by the diversity of mosses and plants which cover it. 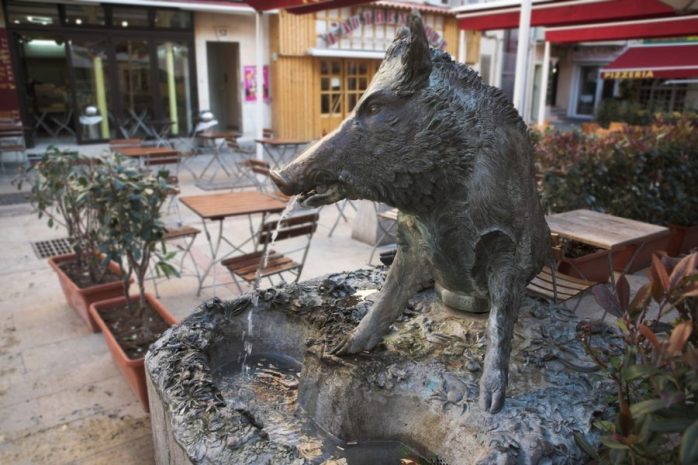 The modern Boar Fountain (1980) is on a small square just off from where the daily produce market takes place, outside restaurant Le Pain Quotidien. It’s similar to the marble Renaissance one in Florence, reinterpreted in bronze. The boar’s snout is the water canon and the fountains’s base is decorated with snakes, turtles and snails.

A few steps away from the Boar Fountain, youll find this one. Not dissimilar to that mossy one in the Cours Mirabeau, though a more modern iteration (1980) from local sculptor Amado which is made from basalt. Aside from its decorative attractions, the fountain facilitates the diffusion of air into the underground parking area below. 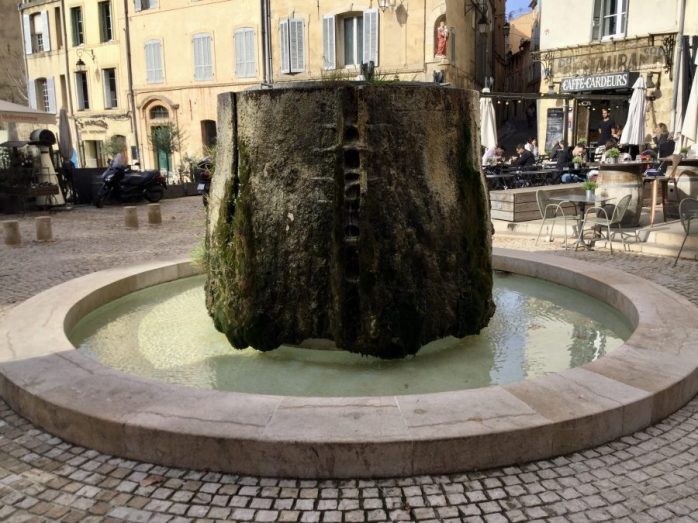 In 1524 Constable Bourbon, leading the troops of Charles V, arrived to take over the town. But when Bourbon’s procession was acclaimed by the crowd, one Provençal peasant refused and was hung on one of three elms shading a small well. 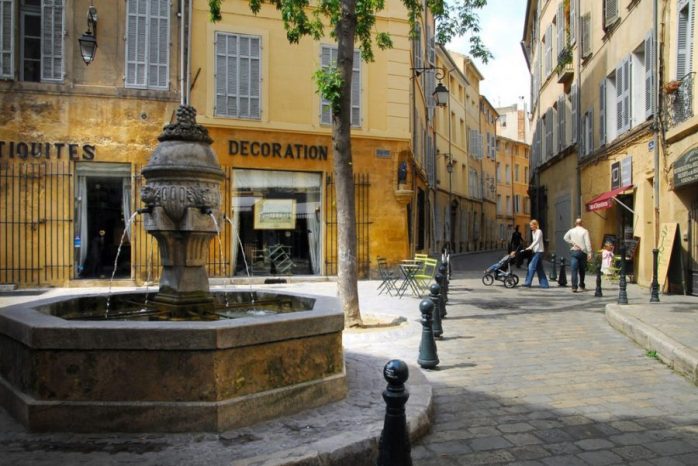 The Three Elms Fountain, built over the well in 1632, is surrounded by three tall trees which protect the square from the sun and keep the water cool. It’s likely that the trees in question were initially elms however, a disease destroyed those trees in the 19th century, and they were replaced first by plane trees and then by maples. 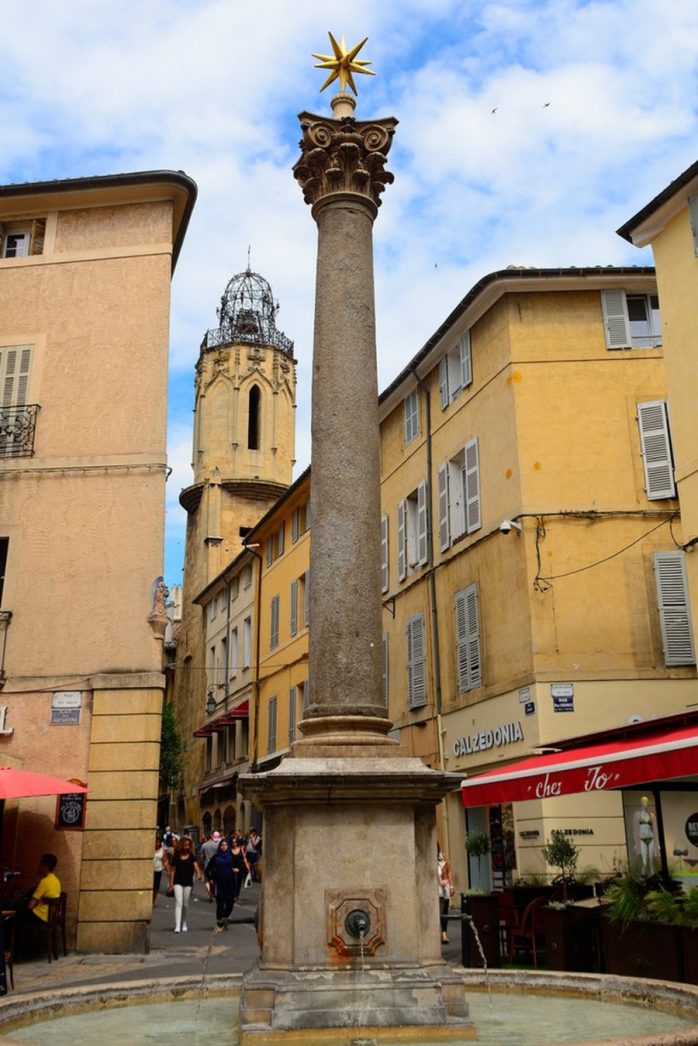 Built in 1620, the fountain on Place des Augustins was converted into a public wash-house in 1786. It was completely rebuilt in 1820 and been classed as a historic monument since 1949. In days gone by, the water from the basin was used to supply the steam locomotives in the nearby train station. 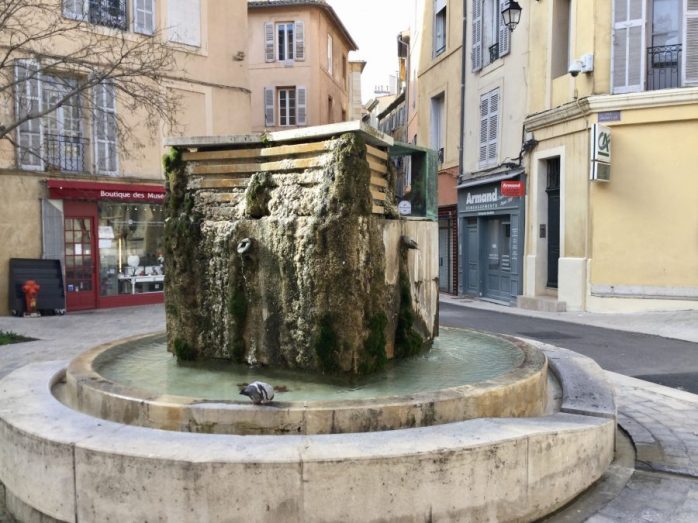 Despite looking quite modern, this one was built during the so-called Enlightenment Century (XVIII). Again, the fountain’s source is the warm water of Bagniers. On the other side, it’s decorated with a spiked star, inspired by the one adorning the previous Fontain des Augustins. 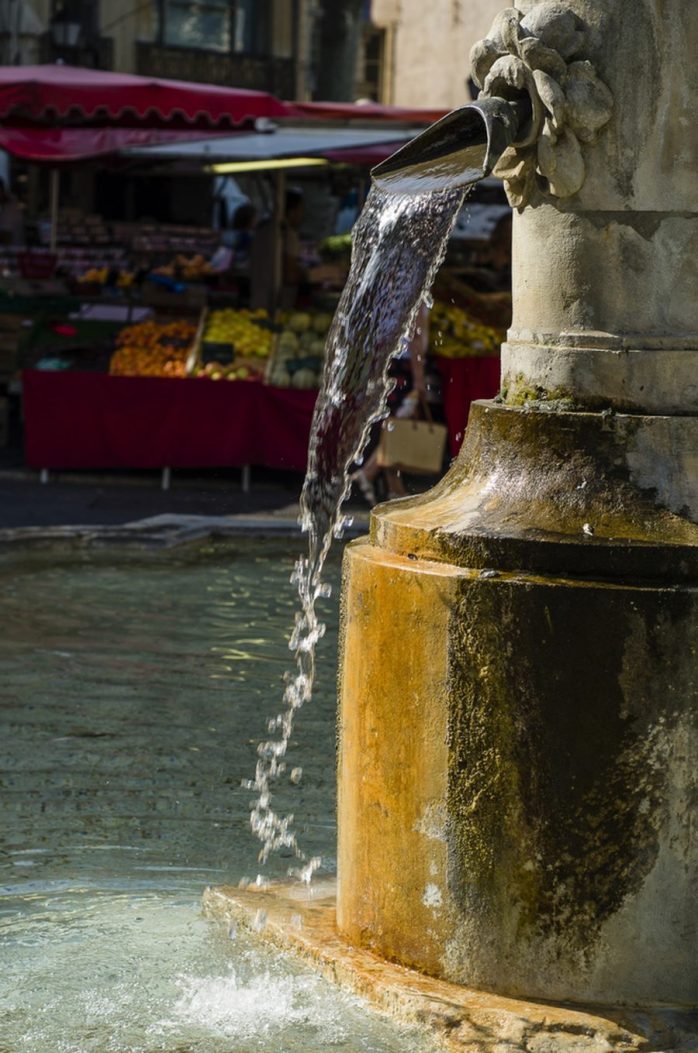 The main law court, in Place des Prêcheurs, was formerly the heart of public life before the Cours Mirabeau. Its fountain was built by Jean-Pancrace Chastel in 1757 and its water used to come from the Pinchinats spring. It was destroyed in 1793 and then rebuilt in 1833, thanks in part to American sponsorship.

In 1737, Georges Vallon was appointed to rebuild Aix’s city centre. He built bourgeois houses to the east and the Corn Exchange to the south, in the centre there’s a fountain, designed by Esprit Brun. The Avignon artist Jean Chastel was chosen to decorate the fountain. In the centre of the circular pond is a cube-shaped pedestal adorned with garlands and flowers at each corner, as well as gargoyles representing water gods and goddesses, from which the water flows. 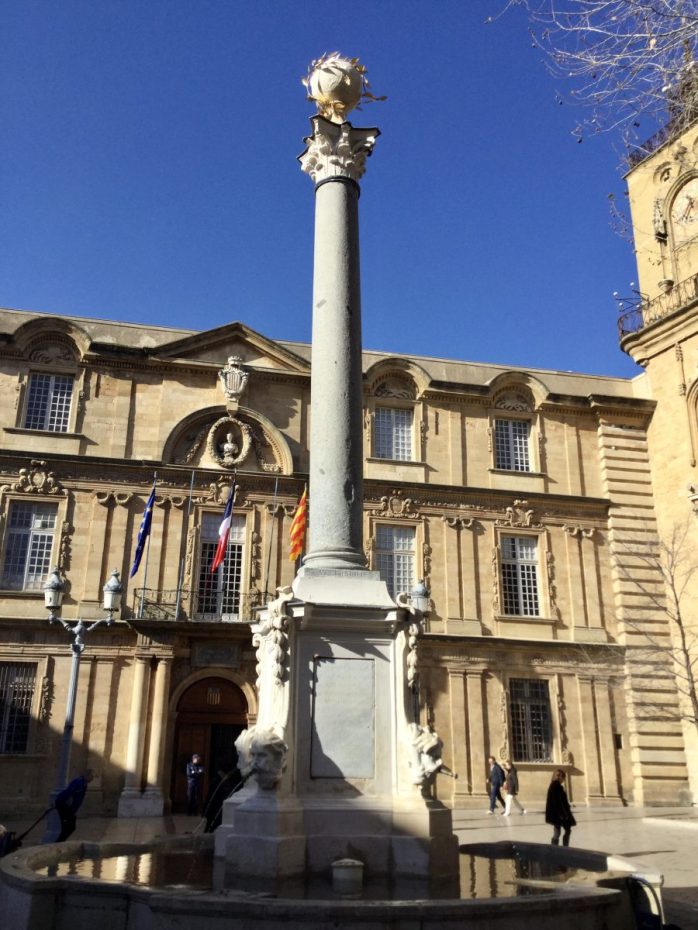 The Square of the Four Dolphins is a must-see on any tourist itinerary. It was built by Jean-Claude Rambot in 1667. This was apparently the first free-standing fountain in Aix. It’s in the Mazarin district; the beautiful, leafy residential heart of Aix. It’s near the Mignet, the school attended by the painter Paul Cézanne. 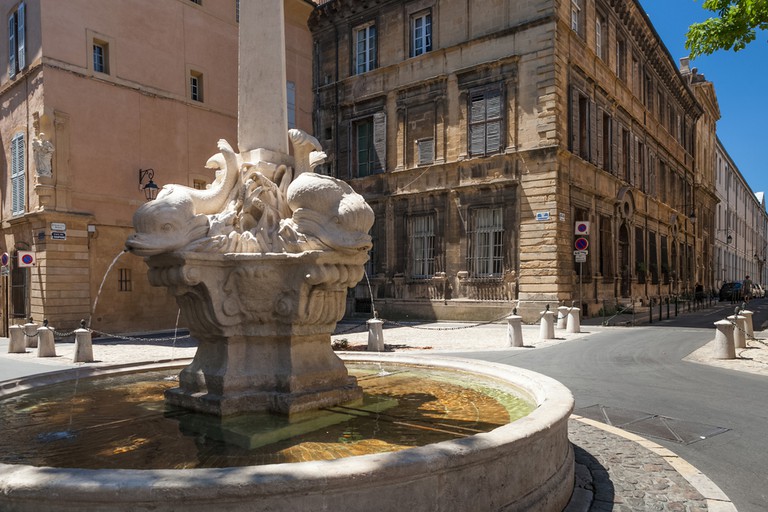 The Albertas family arrived from Alba in Italy in 18th century to take possession of a house they had inherited. Several members of the family made dramatic successive renovations, including building an ornate Baroque square. In 1862, a fountain, in keeping with the style of its surroundings, was added and, in 2000, the square became a national monument. 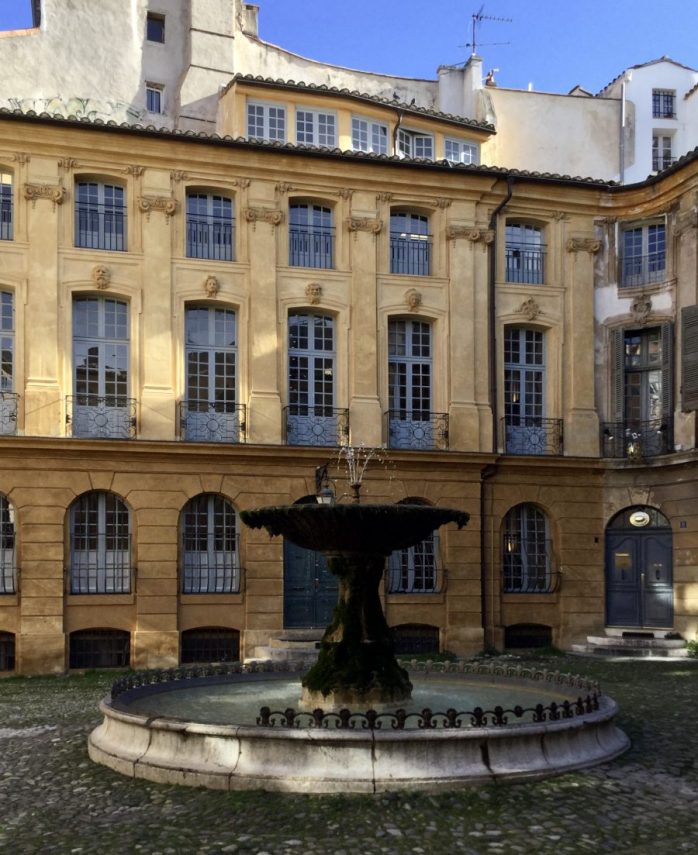 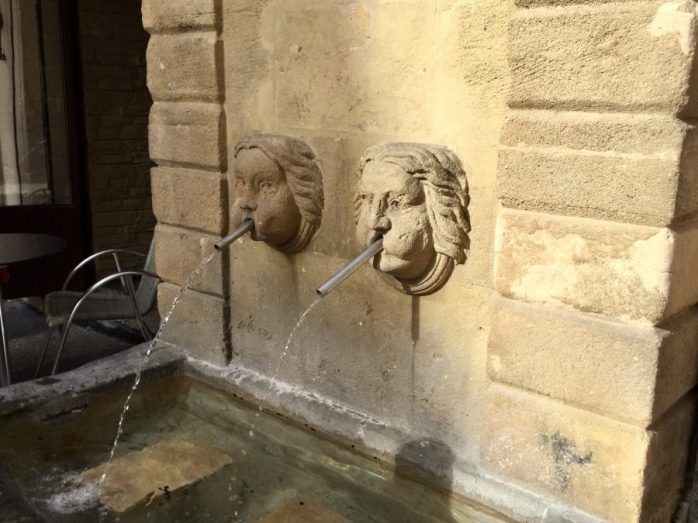 Placed at the intersection of two streets (rue des Chapeliers and rue des Bagniers), the Bagniers fountain, supplied hot water to its working-class residents. Increased traffic meant the fountain was moved from the road in 1759 and installed against a wall. This deprived the fountain of its supply of hot water which now flowed to the Mossy Fountain on Cours des Mirabeau.

In 1926, noticing that the entire top inner part of the fountain was an unused space, Ambroise Vollard, the art dealer and friend of Paul Cézanne, asked for permission to pay tribute to the famous painter by installing a medallion there with his portrait surrounded by a wreath of flowers and fruit. Permission was granted and a drawing by Renoir was used as a model for the portrait. The fountain is nicknamed the “Cézanne Fountain”.

As I discovered, wherever you look, there are fountains all over Aix, often providing much-needed cooling water to a town that can be dry and very hot in the summer months.

27 Comments on “Another trip to Aix-en-Provence”