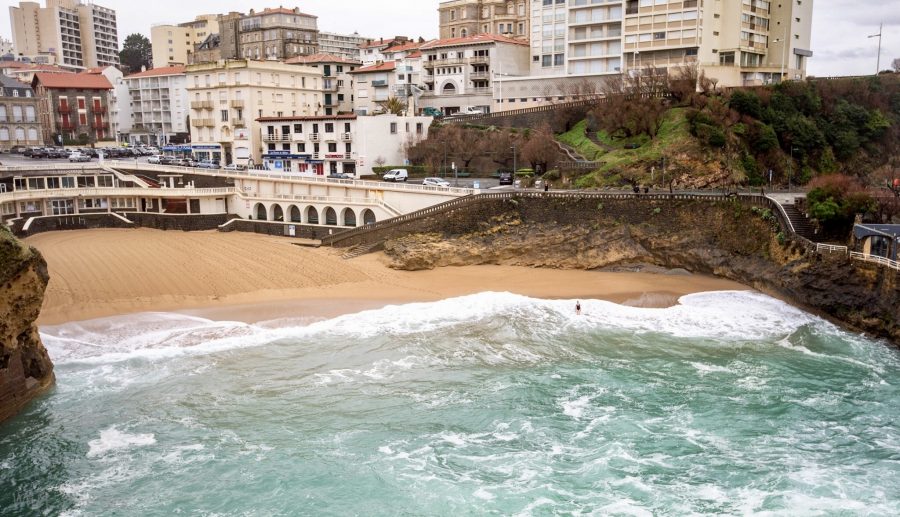 I have waxed lyrical many a time about the Spanish Basque Country. Now’s the time to bang the drum for the Basque Country in France which I love just as much as its Spanish neighbour. It’s not just about beautiful landscapes and great food either, its culture is as fascinating as it is a little mystifying because the French Basques share the same language, culture and traditions as those of the Spanish. They too have managed to maintain a buccolic, country lifestyle but this time among those dark satanic hills of the Pyrenees-Atlantiques. 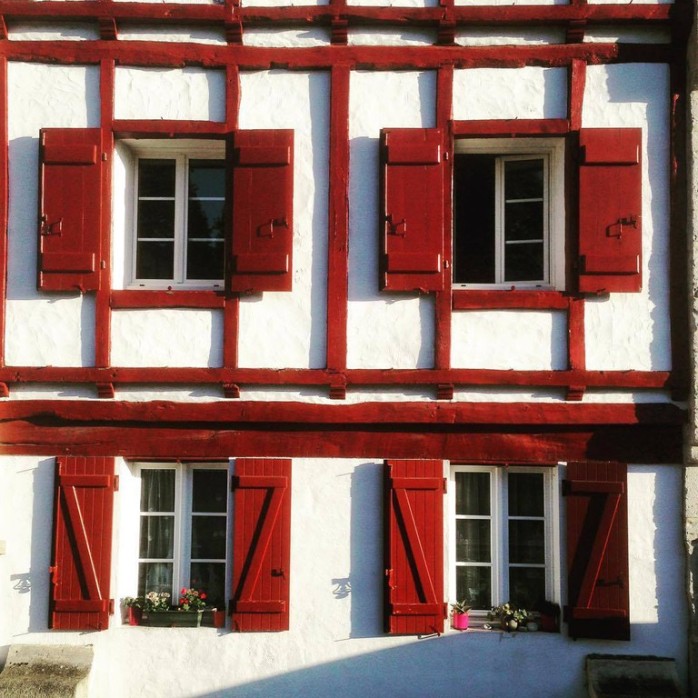 We’ve often stayed in the French Basque country en-route to Spain and I’m going to start with probably the jewel in its crown Biarritz which, by comparison with the French Riviera, is a relatively bling-free coastal getaway.

Napoleon III transformed Biarritz, formerly a fishing and whaling village, when he built a summer palace for his Princess Eugenie (now the Hotel du Palais). Just like that the health benefits of sea bathing became fashionable among European nobility who descended on Biarritz for the season in the late 1800s. Screenwriter Peter Viertel had a similar impact when he visited in 1957 to film The Sun Also Rises. Impressed by the waves, he sent for his surfboard from California and single-handedly introduced surfing to Europe. 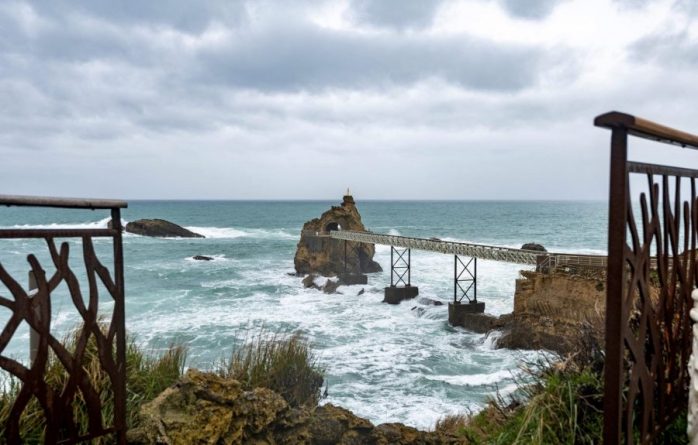 The focus of Biarritz is the Casino Municipal, on the Grande-Plage. The loveliest places to stroll around are the streets between there and the Plage du Port-Vieux. Just beside the Plage du Port-Vieux, the most sheltered and intimate of the beaches, a rocky promontory sticks out into the sea, ending in an iron catwalk anchoring the Rocher de la Vierge, an offshore rock adorned with a white statue of the Virgin, which has become Biarritz’s trademark. Just below is the picturesque harbour of the Port des Pecheurs, backed by tamarisks and pink and blue hydrangeas. Beyond lies the Grande Plage, an immaculate sweep of sand that stretches past the casino, all the way to the lighthouse on the Pointe St-Martin. 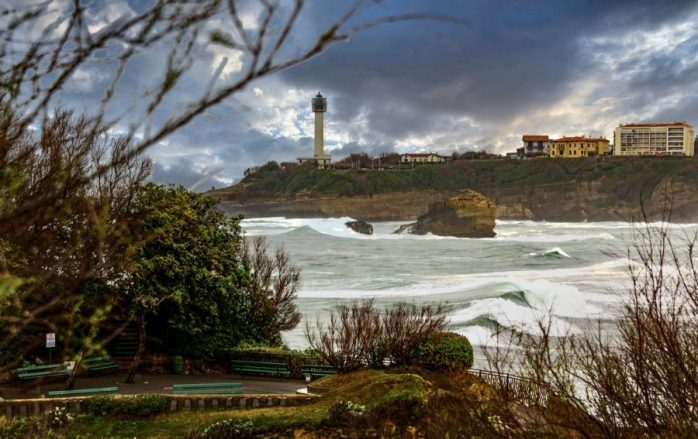 Another icon, the lighthouse was built in 1834 and stands 73 metres above sea level overlooking Cape Hainsart (so called because of the oak trees which surrounded it in the past). It marks the boundary between the sandy Landes coast and the rocky coast of the Basque Country. It’s a climb of 248 steps to reach the top but it does offer an exceptional panoramic view of Biarritz and the Basque hinterland. 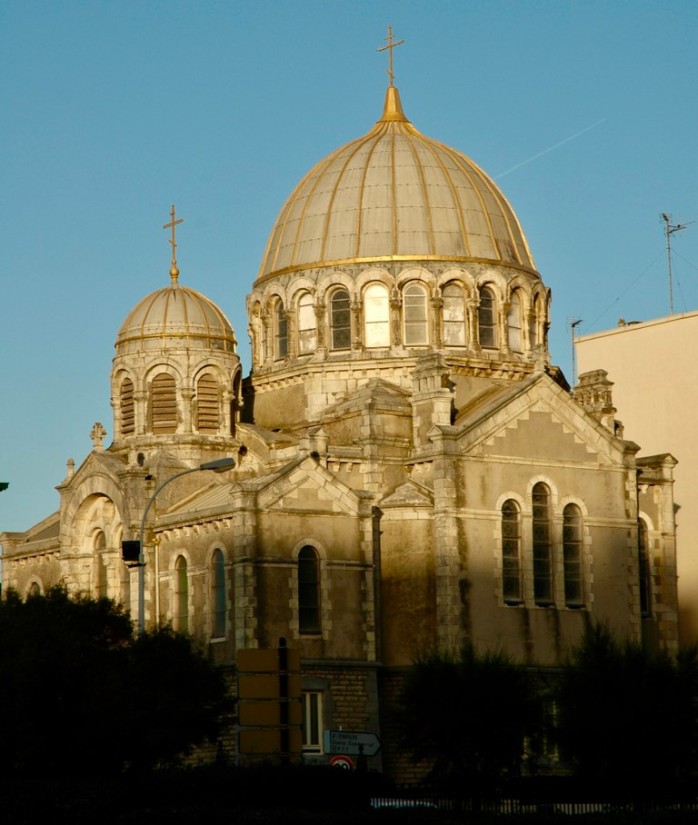 Also located in the Port-Vieux, you’ll find the neo-gothic Sainte Eugenie Church aka Imperial Chapel also built during the reign of Napoleon III in 1864, on Empress Eugenia’s request, in a Roman-Byzantine and Hispanic-Moorish style. In other words, a bit of a mash-up. It’s dedicated to the Virgin of Guadalupe and was listed as historical monument in 1981. While, the more centrally located Orthodox Alexandre Newsky Church (above) was built in the Byzantine style by Biarritz architect M. Tisnés. Inaugurated in September 1892, in the presence of members of the Russian imperial family, it has been classified as a Historical Monument since June 2015. 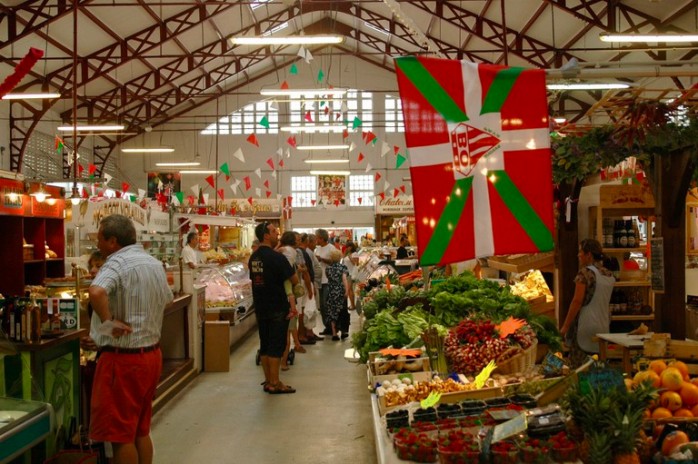 Biarritz has a beautiful red-brick covered market, Les Halles, fresh of façade after a complete renovation. Outside, fat seagulls circle, hopeful of a fishy morsel. I love wandering around markets and always make a point of checking out the produce. Here it was so fresh and beautiful, it looked as if it was sculpted from marzipan. At lunchtime, we enjoyed a few freshly shucked bivalves at an oyster bar.

As one might expect, Biarritz has a lively restaurant scene and plenty of nightlife to satisfy even the most dedicated of party goers. I appreciate that I haven’t even touched on many of its other charms such as its surf culture, golf courses, beautiful coastal walks and cycling highway – we have done that – but maybe this is enough to wet your appetite. Further towns to follow………