Mougins is without doubt one of the loveliest places to visit on the French Riviera. Only 15 minutes by car from Cannes, this charming medieval village is set among pines, olives and cyprus trees, and surrounded by forests. 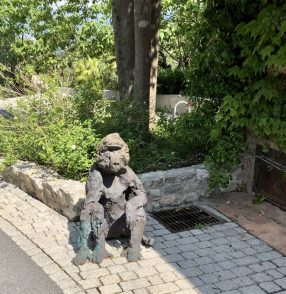 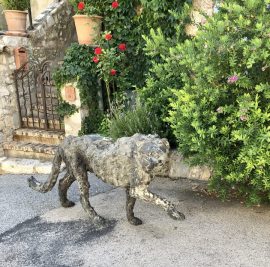 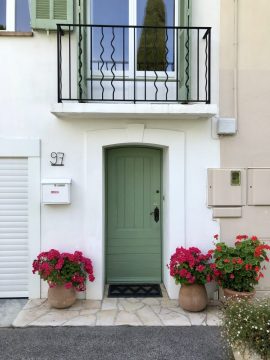 As soon as you arrive, the charm of Mougin’s narrow streets, bordered by colourful flowers and superb ancient houses starts to seduce you. Picturesque doorways (and doors) with each stone carefully restored, beautifully designed window-frames…… there are delightful details everywhere you look plus, until the end of September, an open air exhibition of animal scupltures by Davide Rivalta, scattered thoughtfully throughout! 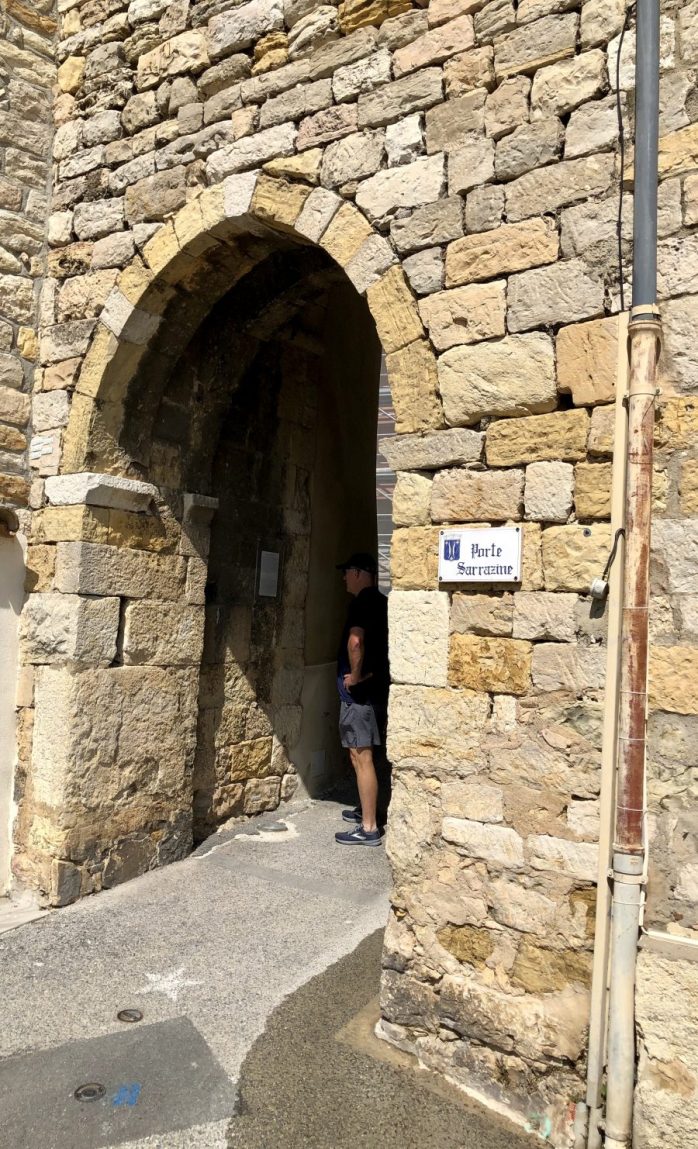 Like many of the medieval villages around here, Mougins had been occupied since the pre-Roman period before being eventually absorbed into the spread of the Roman Empire. In 11th century the Count of Antibes gave the Mougins hillside to the Monks of Saint Honorat (from the nearby Îles de Lerins just off the coast of Cannes) who continued to administer the village until the French Revolution. During this period, Mougins was a fortified village surrounded by ramparts. Parts of its medieval city wall still exist as well as one of the three original ancient gate towers (Porte Sarrazine). Viewed from the air, the village resembles a snail, its inner core being the earliest dwellings which date from 11-15th centuries.

Heading past the various art works, including two magnificent lions and a massive head of Picasso, past the newish Musée d’Art Classique de Mougins – more of which tomorrow –  we head up the hill past the Tourist Office (formerly Picasso’s studio) and the old public wash house (Lavoir) built in 1894, now an art gallery. On the ramparts, across the way, is the former municipal slaughterhouse. The square itself is constructed on what was once Sainte-Anne’s cemetery with a chapel of the same name, which has since been destroyed. 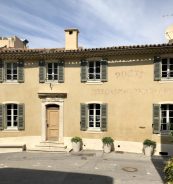 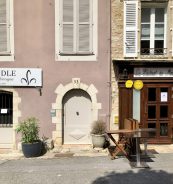 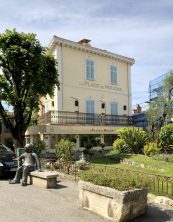 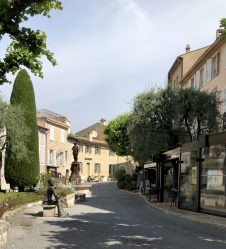 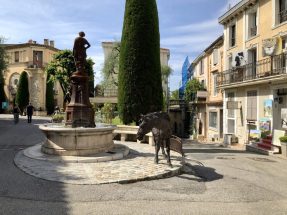 We headed towards the fountain that marks the intersection of avenues de la Victoire and du Commandant Lamy. On the left, restaurant “Au Rendez-vous de Mougins” (a former Hôtel de France) was readying itself for re-opening on 2 June. The restaurant’s first floor contains a room with vaulted ceilings which served as the 15th century court room because a 1438 charter stipulated that the village’s inhabitants would be tried in their own village. On the right, next to the restaurant “Le Bistrot” is the old post office. The building first served as a stable for the olive mill’s horses. The last olives were pressed in 1918 and the site was then converted into a house, whose most famous occupant was Christian Dior.

At the far end of the square, there’s the Town Hall, built in 1618 as the chapel of the White Penitents, it has been used for weddings and by the city council since 1954. It also houses the Espace Culturel and Gottlob Museum., which hosts exhibitions throughout the year. From there, we could easily see the facade of number 41 decorated by the talented painter and portraitist Paul Daemen, who spent his last years in Mougins.

At the corner of rue du Badier and rue des Migraniers is the former home and ceramics workshop of Maurice Gottlob, a rural policeman and well-known regional artist. We followed the wall round to the place du Lieutenant Isnard where the distilleries were once located.  We took a left turn onto the rue des Isnardons, which is flanked on its west side by the cultural centre “Le Vaste Horizon.”

This was where Picasso pitched up one fine morning in 1936 and fell in love with Mougins. Paul Eluard, Jean Cocteau, Man Ray and Rosemonde Gérard soon followed his example, and together they shaped the future of artistic expression. Allegedly, Picasso painted every wall of his room, only to face the wrath of the hotel owner who made the unknown painter cover over his work with white paint the next day. This didn’t discourage Picasso, who much later settled permanently in Mougins, next to the chapel of Notre-Dame-de-Vie, where he lived out his last days.

Heading back on ourselves, we take a street incorporated into the fortifications that surround the village, admiring the many art galleries as we once more cross the place du Lieutenant Isnard and rue du Colonel Roustan. During the Middle Ages, this was the end of the route from nearby Grasse, later named after Colonel Roustan, a Mougins hero who lived in the “Santa-Lucia” villa. This villa was also home to such celebrities as Roland Petit, Zizi Jeanmaire, Yves Saint-Laurent and Paul Anka. We then wend our way upwards to place des Mûriers, walking beside the rempart’s remains and watchman’s round tower to reach yet another square. 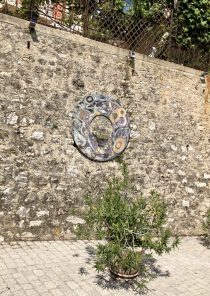 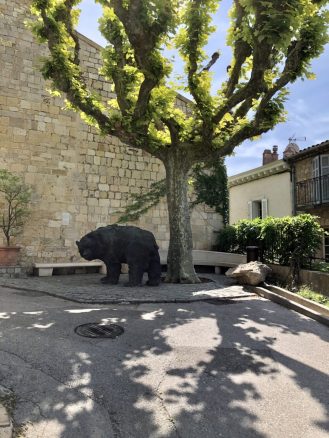 Number 36, the house where Commandant Lamy was born. there’s an artist’s studio next door. To the right, on the rue du Moulin, is the old oil mill, which was once called the “Moulin Isnard.” It was later converted into a restaurant by the master chef Roger Vergé, latterly of Moulin des Mougins. The decorator Roger Vivier, who also designed the coronation shoes worn by Queen Elizabeth II, oversaw the restorations.

Further along, on the placette de l’Église, we found the only entrance to the village, which is still standing today, Porte Sarrazine. The adjoining house, which I’d previously visited, is now a photography museum, largely thanks to the donations of André Villers. Temporary exhibitions are shown on the first floor. On the second floor, there’s a permanent collection of antique photography equipment, as well as photographs taken of Mougins in 1900. The third floor houses a collection of photographs of Picasso taken by the great contemporary photographers J.-H. Lartigue, R. Doisneau, E. Quinn, D.D. Duncan, S. Roth, L. Clergue, Otero, Denise Colomb, and of course André Villers.

Next up is the church of Saint-Jacques-le-Majeur, the oldest part of which was probably the former lordships’ chapel of Sainte-Marie. It was built in three phases, starting in 11th century and finishing at the beginning of 19th century. The nearby narrow street once housed many artisans including, famously, the goldsmith Bernardin Bareste. In 1666, he was the only craftsman of his kind in the region and made gold coins for the abbey of Lérins.

All too soon we were back at the car after a splendid trip down memory lane. We couldn’t remember the last time we’d visited but it certainly hadn’t been so blissfully empty!

40 Comments on “Trip to Mougins”