To be honest, we’d long intended to visit this museum but, despite it being close to OGC Nice’s Allianz stadium, we never seemed to find the time to pop in. This was finally rectified last November, when we were invited by friends to attend the presentation of some new local bike races for elite and amateur athletes held at the museum. This afforded us the opportunity to wander around enjoying the exhibits pretty much on our lonesomes.

Naturally, I did my research beforehand not appreciating that it is the national sports museum. First established in Paris in 1922 by the French war minister – how appropriate! By the 1940s, the museum had fallen into disrepair and was re-established by the secretary of state for youth and sports in 1963. Architect Roger Taillibert created the galleries inside the Parc des Princes stadium in 1972. The museum was relocated to 93 Avenue de France (13th arrondissement) from 2008 to 2013, until its move to Nice on 27 June, 2014.

Today, the museum contains more than 100,000 items documenting different sports and sporting achievements from 16th century to the present day, including a fine collection on the history of the modern Olympic Games from 1896. The collections include sports equipment, paintings, sculptures, posters, drawings, stamps, advertising, books and magazines, plus interactive displays. 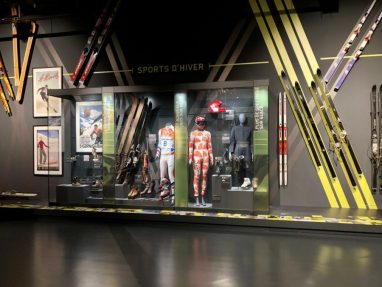 2. The one-on-one challenge – where athletes duel one another and only one can be declared the winner! This area features unique pieces such as Marcel Cerdan’s shorts and boxing gloves, equipment from great judokas, tennis players etc

3. The collective challenge – focuses on team sports and particularly showcases those years where France won the Football World Cup. There’s also a large collection of jerseys from famous athletes, not just French ones, such as Lionel Messi and Michael Jordan.

4. Finally, those challenges “Beyond Limits”   – bear witness to the most extraordinary of human exploits! Such as crossing the desert by bike, windsurfing across an ocean, or speed records in motor sports. This is where you can drive an F1 car at the Monaco Grand Prix using the on-site simulator.

The exhibition designed by the museum in collaboration with Amaury Sport Organization, organiser of the Tour de France, traced the jersey’s many adventures, including those where it was draped across the shoulders of the sports’ greatest champions and more modest riders. 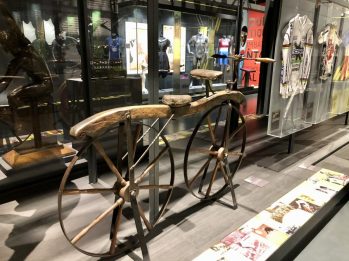 The jersey’s first appearance was in 1919, the 13th edition of the Tour de France, and has long since become the Tour’s universal emblem. The exhibition reminded us that if the yellow jersey is synonymous with glory, it is also permeated with the sweat, and sometimes the tears, of a long succession of exploits, disillusions and even tragedies. From Eugène Christophe, the first to wear this badge of honour, to Eddy Merckx, absolute record holder who spent more than three months of his life in yellow.

More than 170 objects and numerous immersive and interactive devices (bicycle simulator, virtual reality headsets, holograms, family games, etc.) paid tribute to this legendary jersey which, since its creation, has made the rider stand out from the others in the peloton, weaving its magic and confering greatness.

If, like me, you’re a sports’ fan, this museum is well worth a visit! Of course, it’s best combined with a trip to watch my beloved OGC Nice.