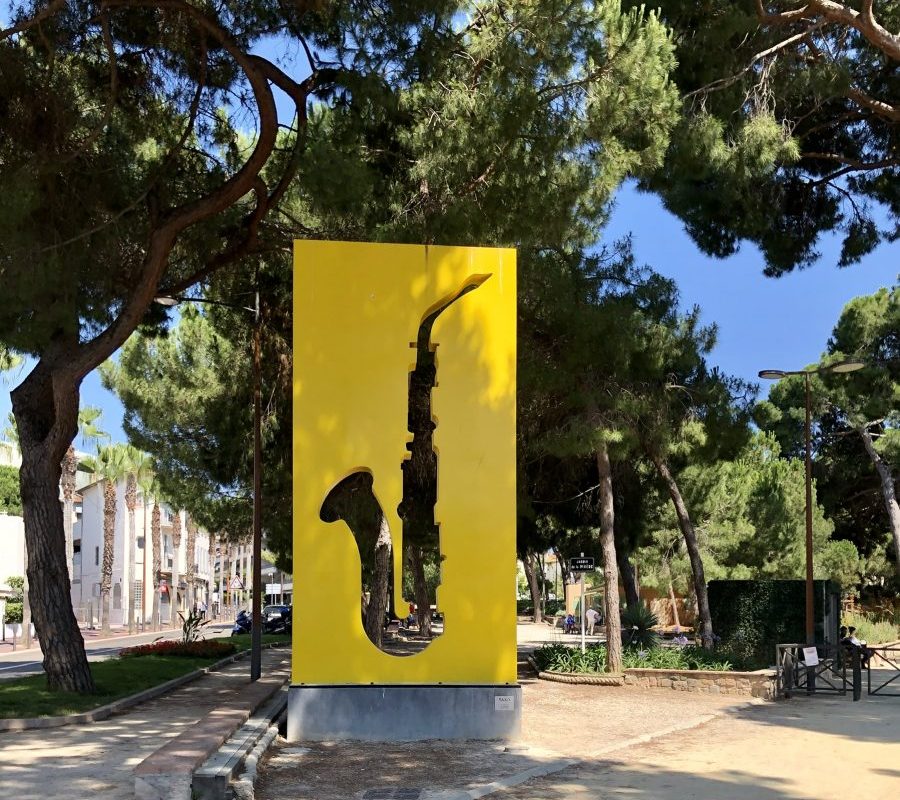 One Sunday afternoon we decided to swing by Juan-les-Pins, a town we frequently cycle through, to have a closer look at some of our favourite buildings and the new developments around town.

While the name Juan’les-Pins conjours up visions of a heady pre-war lifestyle and the so-called Swinging Sixties, this neighbourhood [of Antibes] started way back in 1882. It was bordered by sandy beaches and scattered with pine trees, hence Juan-les-Pins.

The rise of the resort really started after WWI with the arrival of the Americans when previously a winter resort, it became a seaside resort in the 1920s. Promotor Edouard Baudoin bought the Casino, wonderfully renovated it and opened it in spring 1924, in the presence of the intellectual and artistic elite of the time. Among the guests was Franck Jay Gould, a rich American heir, on holiday in the region. He fell in love with Juan-les-Pins, and decided to invest in the resort. It was the birth of Le Provençal.

At the same time, Gerald and Sara Murphy, American patrons, decided to spend the summer in Cap d’Antibes and in tune with their ifestyle surrounded themselves with the famous artists and writers of the time (Pablo Picasso, Fernand Léger, Scott Fitzgerald, Ernest Hemingway, John Dos Passos…).

Among the artists seduced by the charms of Antibes and Juan-les-Pins, Sidney Bechet resided there for a while and planned his festive wedding in the streets of Antibes. With other musicians, he brought jazz music to the resort. The Jazz Festival was created in July 1960 in his honour. Ever since, every summer, it takes place in Pinède Gould, the musicians playing to the rhythm of the waves and cicadas, with the Mediterranean Sea for a backdrop. We’ve been a number of times and it’s always a fantastic evening. 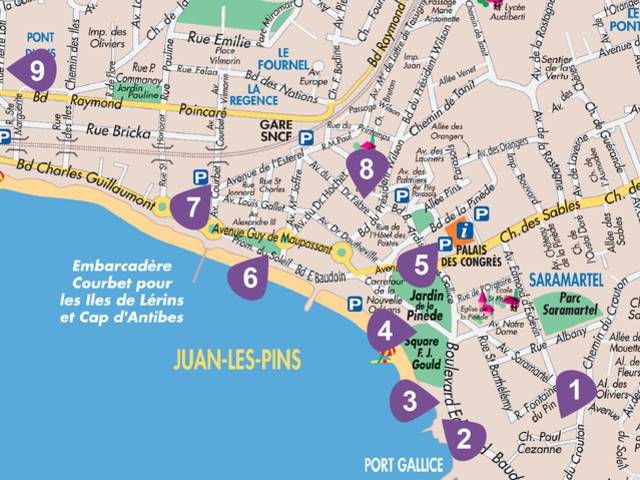 Some of our favourite buildings in Juan-les-Pins

Some of our favourite buildings are on the Tourist Office’s Map, others are not but I’ll include them anyway. 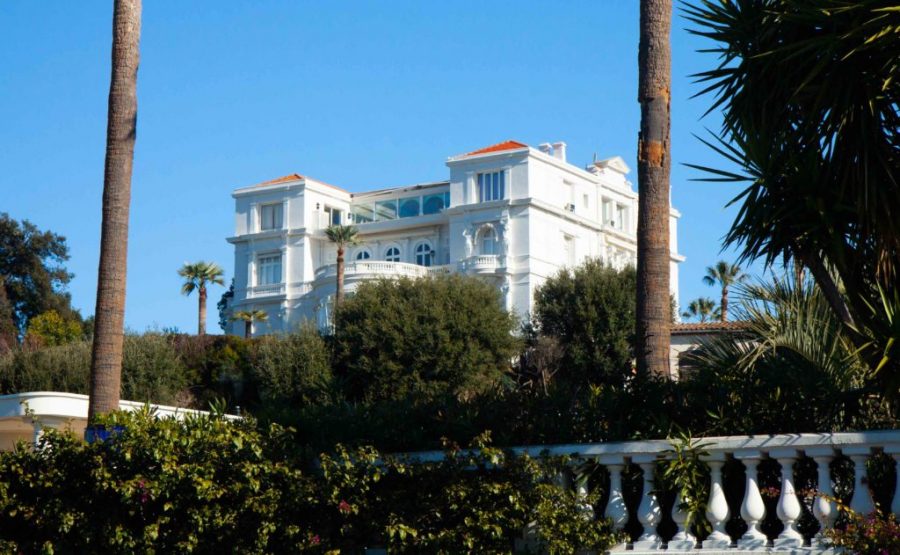 1. The Chateau de Juan-les-Pins is just on the outskirts of Cap d’Antibes, clearly visible from the entrance to  Port Gallice. Built before the resort’s heyday around 1860, it was firstly the residence of  Queen Emilie of Saxe, before hosting Rudolf Valentino and his wife one summer. The architecture has been modified over the years, and it is now split into four large luxury appartements. 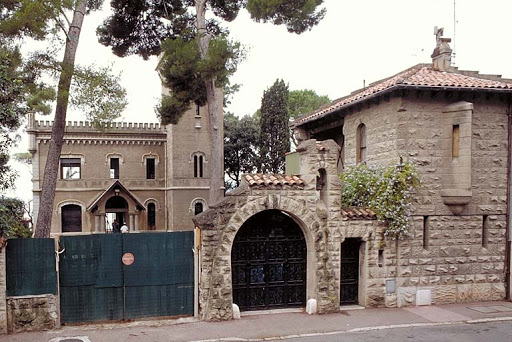 2. Heading into Juan-les-Pins, on the left, a small original, medieval style, Sienna coloured villa named Villa la Vigie, which was owned by Franck and Florence Jay Gould. Many artists and writers resided there, invited by the couple. Among them, Jean Cocteau, Estée Lauder, Charlie Chaplin and Pablo Picasso who, during a stay, painted the walls. But Franck Jay Gould didn’t like it and had it covered over. Ooops!

3. Further along on the left, the beautiful Hôtel Belles-Rives pays tribute to the writer Francis Scott Fitzgerald. First Villa St-Louis in the 20s, it was the summer residence of Francis Scott and Zelda Fitzgerald who spent many happy months there. After they left, a young Russian, Boma Estène, bought the villa, expanded it and created a seaside hotel, the first one on the Côte d’Azur. The present owner, Boma’s grand-daughter, ensures that the spirit of the hotel never dies. She took her ancestor’s Art Déco furniture, photos and artworks out of storage and has put them in the bar, the restaurant and on the terrace. It’s one of our favoured haunts for Sunday lunch and cocktails. 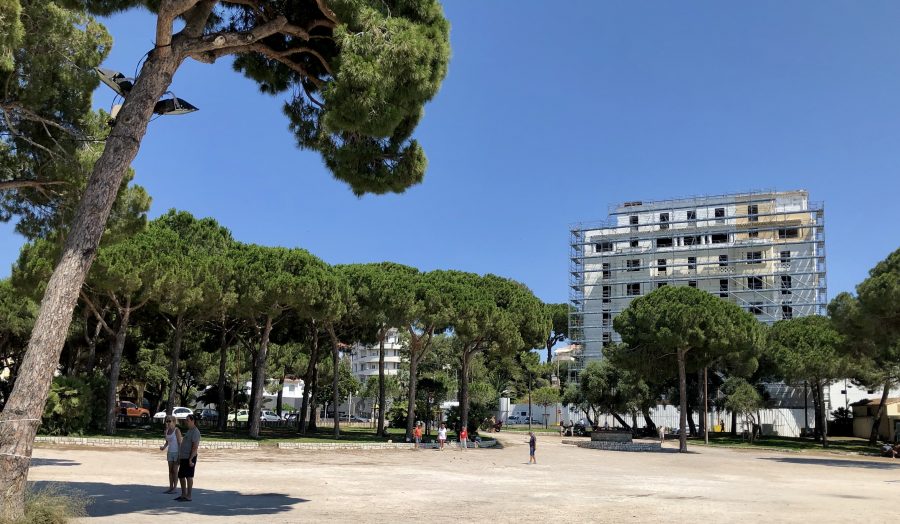 Just past the hotel on the right is a building which has lain in disrepair for seemingly ever. Hôtel Le Provençal, boulevard Édouard Baudoin, was built in 1926 by American millionaire Frank Jay Gould, the son of financier Jay Gould, a railway baron. At its opening, the hotel was considered extremely avant-garde with a tennis club, jetty, restaurants and luxury suites, signalling a whole new era on the Côte d’Azur. It was seen as the ‘place-to-be’ in Juan- les-Pins, and a spot where the world’s celebrities and beautiful people came to party.

Over the years Edith Piaf danced in the ballroom, Coco Chanel and Marilyn Monroe are said to have lounged on the expansive terrace, and Ella Fitzgerald is remembered for having thrown open an upstairs window of the hotel to serenade the crowds below. At various times Charlie Chaplin, Winston Churchill and Ernest Hemingway propped up the hotel’s bar. Are there any bars in the Med that Hemingway didn’t visit?

In 1976, well after its heyday, the hotel was shut for the last time. Its owner, Parisian jeweller Alexandre Reza, decided to close Le Provençal for a complete makeover, but the refurbishment never took place and the building was left to fall into ruin, remaining one of Juan-les-Pin’s most prominent unused buildings.

Development was restarted in 2009 but has been delayed numerous times. The hotel was bought by Cyril Dennis, a British-born, Monaco-based property developer who made his fortune by investing in London’s Docklands in the 1980s. His intention was for the owners of the luxury apartments to have access to concierge services, a luxury boat, helicopters, and a ski chalet in Courchevel. It has since been resold to John Caudwell, a British philanthropist and billionaire of mobile phone fortune who is intending to build twenty to thirty luxury apartments within his Cauldwell Collection. 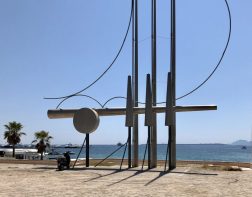 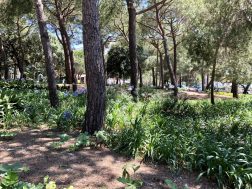 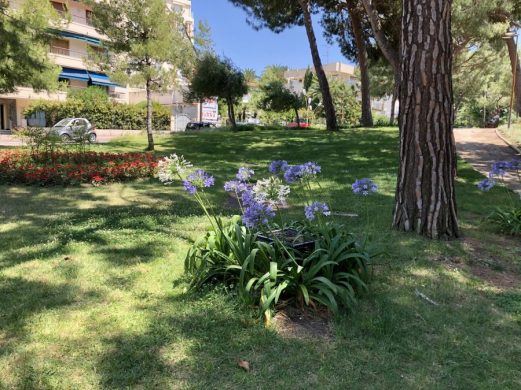 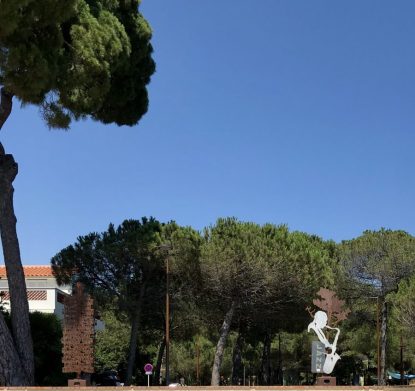 4. A short stroll from the hotel is La Pinède. Now split in two: the north is a children’s playground, a carousel, a sculpture by Sosno with benches in the sun or in the shade of century old pine trees; and, the south, “Pinède Gould” which transforms itself every July into an open air performance hall. On the path along Pinède Gould, there are the handprints of the jazz players who have played at the festival.

5. On the north side of La Pinède is the hotel Juana, built in 1931 in the Art Déco style, for Joseph Barale, a Russian industrialist. The hotel welcomed many celebrities, including Ella Fitzgerald, and it became one of the first air-conditioned hotels on the French Riviera. Since it was built, the façade of this listed historic building has remained unchanged with the stucco decoration, wrought iron, fluting, columns, balconies and round arched windows. 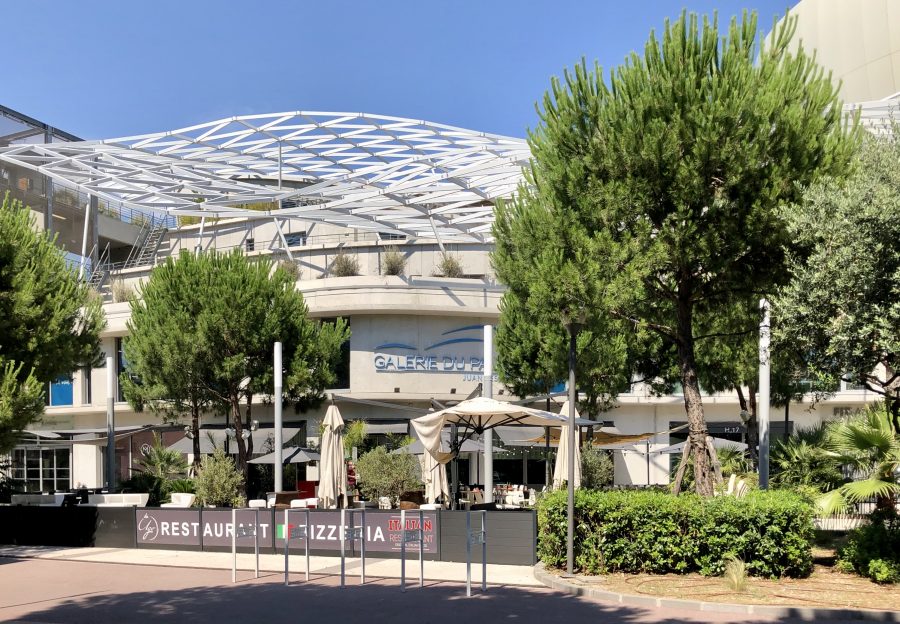 Just across from the hotel is the Palais des Congrès. Completed in 2013, this ultra modern architecture  by Jean-Jacques Ory hosts numerous public events and private congresses throughout the year.

6. Heading back towards the shopping streets, at the end of boulevard Edouard Baudoin is the start of the Promenade du Soleil, chock-full of cafes, restaurants and private beaches where we noted that people were managing some social distancing despite the narrowness of the strip of sand. The 22:00 beach curfew also applies here. 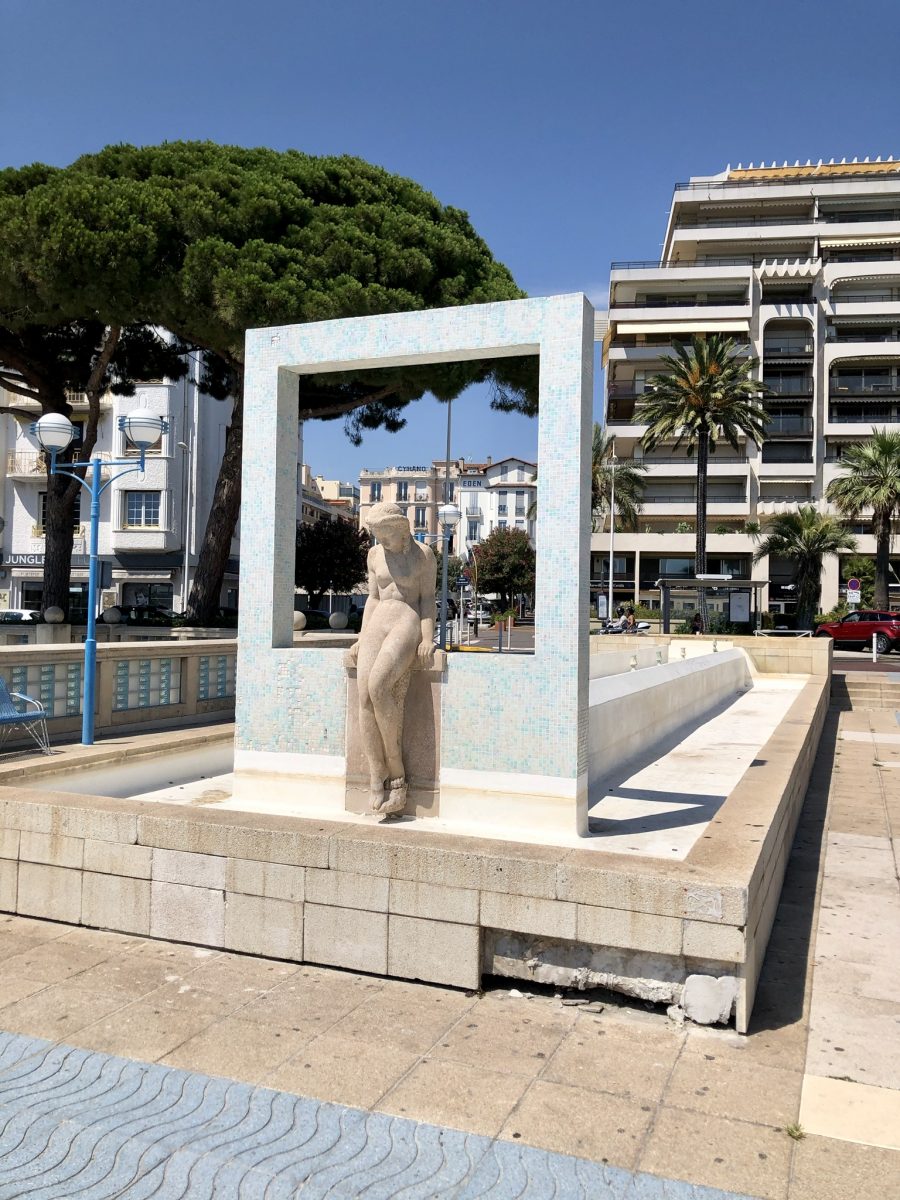 Looking towards the beach is La Baigneuse (the bather), a statue by Alphonse Grebe, installed in 1940 to symbolise the beautiful life in Juan-les-Pins. Clearly the poor girl could do with a makeover. 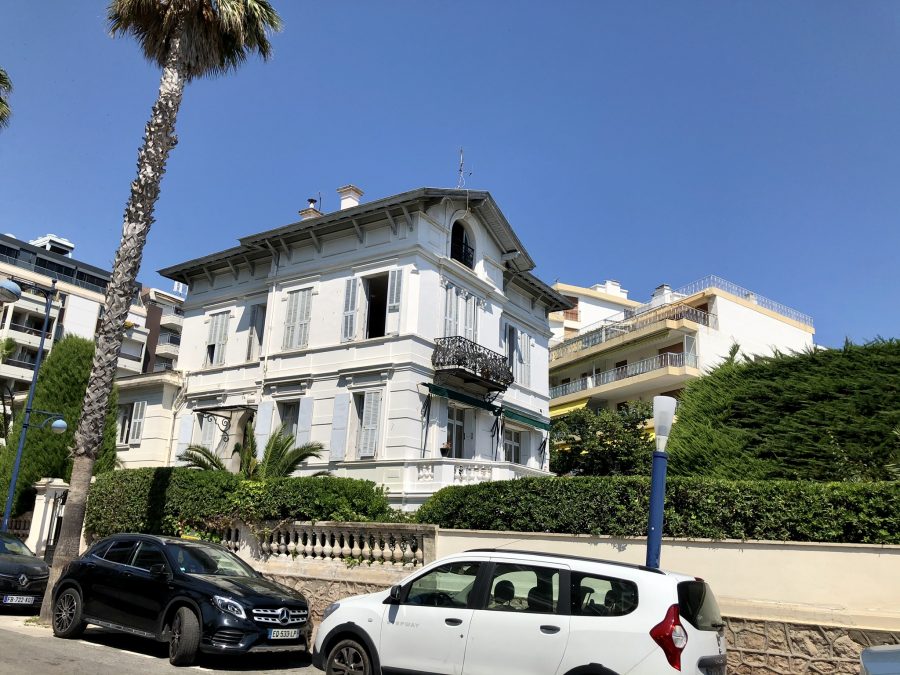 Down one of the side streets to the right, you can just see Villa L’ile Verte, 21 avenue Maréchal Joffre, which was built in 1891 by architect Ernest Macé and is a typical example of Belle Epoque seaside architecture. 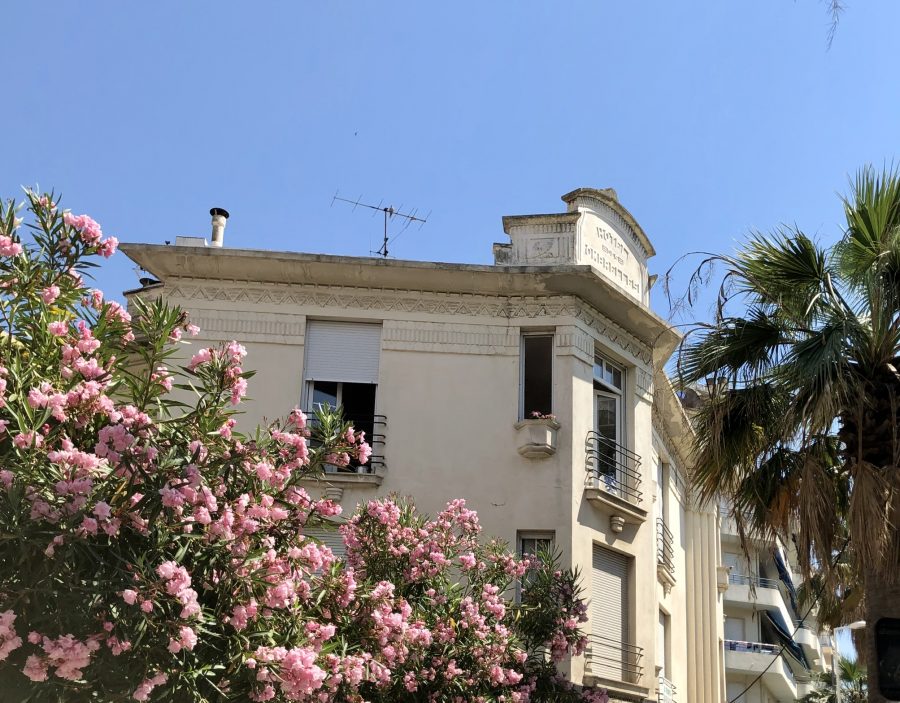 7. At the end of the Promenade, turn right on avenue Courbet and at the crossroads with avenue Esterel, are three more Art Déco buildings, including the former Hotel des Ombrelles, plus Le Grand Pavois hotel which was built on the site of a villa that had belonged to a Russian national from Saint Petersburg. You can also see the Juan-les-Pins railway over-bridge, a fine example of Art Deco decoration with geometric columns and floral designs – artist unknown. 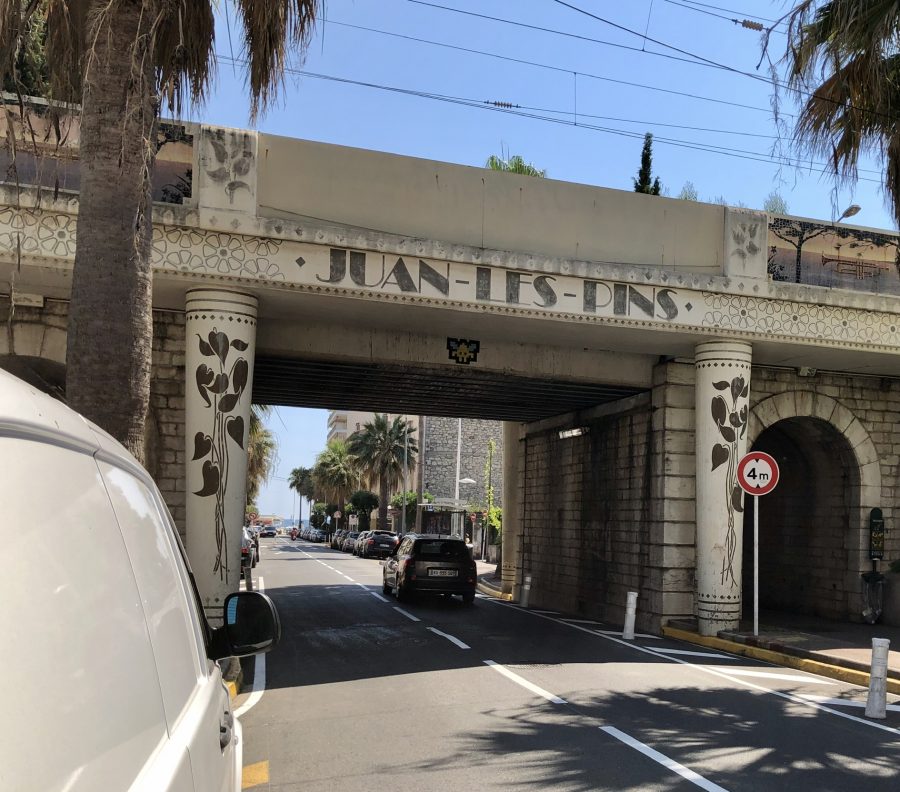 8. In rue du Dr Fabre, opposite the post office, is Palais Biagini, a huge residence with a mix of architectural styles: a touch baroque, a touch Art Déco. This was the home of a Genoese family who fled from Italy’s fascism in the 1920’s. A little further down the street, the newly renovated L’Auberge du Pin Doré, has regained its lustre and original friezes.

In the 1930’s, Auberge du Pin Doré hotel was a firm favourite with the British colony. It had a winter restaurant in the basement and the terrace, still visible today, served as a summer restaurant. 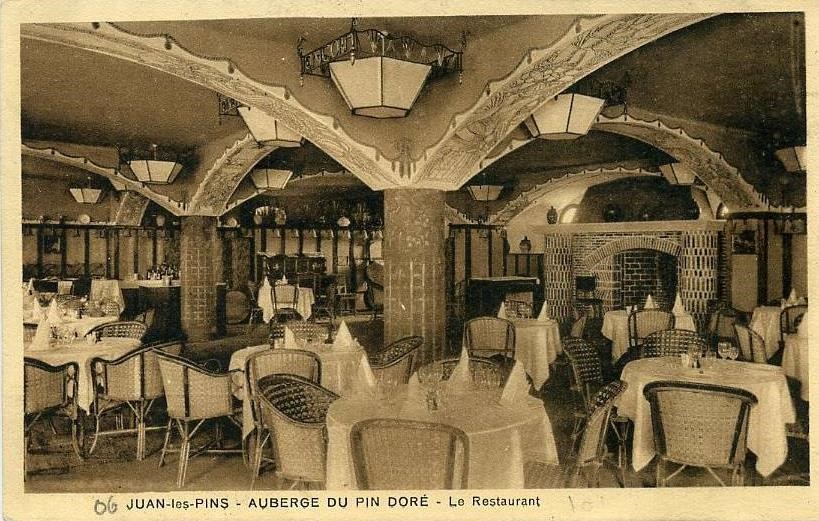 Today, like many of the former hotels, the building houses a mixture of private residential and holiday rental apartments. The exterior of the building was repainted in 2012 with façade murals to replicate the previous hotel. 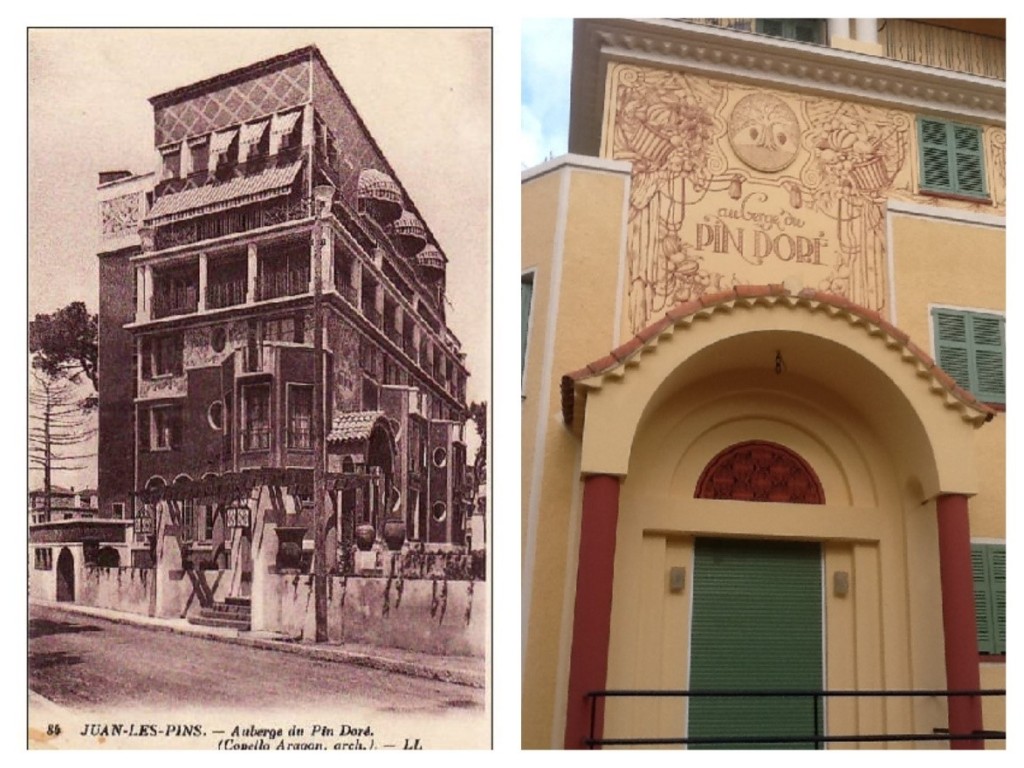 9. As you head out of town towards Cannes, there’s a 5 hectare garden, Parc Exflora, which has wondeful examples of Mediterranean style gardens, through the ages. En-route to the garden, on your right you’ll see Villa Al-Djezair, 1 boulevard Charles-Guillaumont. Built in 1922 by Cannes architect Ernest Truch, it is one of the best preserved examples of Moorish architecture on the Côte d’Azur. It showcases the orientalist references: Minaret, cupolas and domes, terraces lined with battlements and merlons, latticework and Arabic decoration. It’s been recently fully renovated and is now a luxury restaurant. 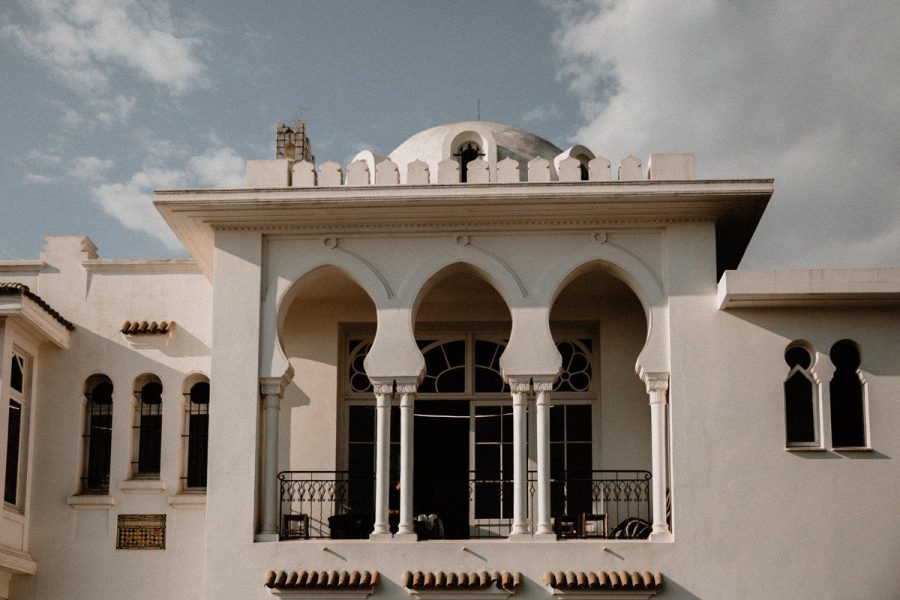 If, like me, you’re a lover of architecture and architectural details, Juan-les-Pins is well-worth a visit. Can I suggest lunch at one of the three main hotels. Personally I’d plump for either Les Pecheurs or the Belles-Rives simply because they overlook those gorgeous azure waves. 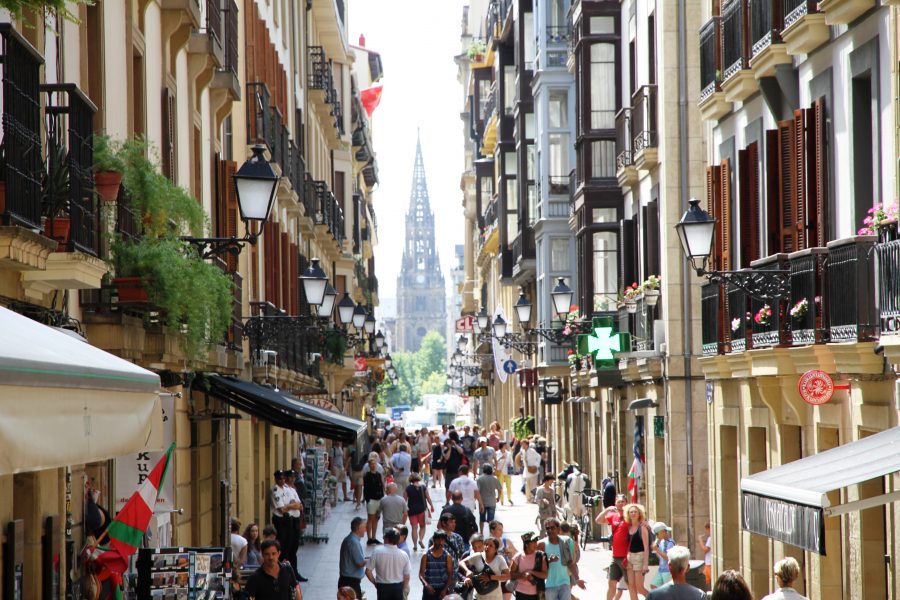