As you know, sightseeing is thirsty work and no day out would be complete without lunch, or at least a picnic. I had opted for the former and booked lunch at La Bastide de Moustiers which is celebrating its 25th anniversary this year.

But first, a quick look around the village of Moustiers Sainte Marie, since 1981 listed as one of the most beautiful in France, which is settled into a notch at the base of a limestone cliff at 630 metres (2,000 feet). The village, built like an amphitheatre, was named after the monastery founded there in 5th century. It’s famous for its pottery and its chain with a silver star suspended high across the valley, which was once owned by a knight who had returned unharmed from the crusades. 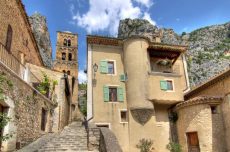 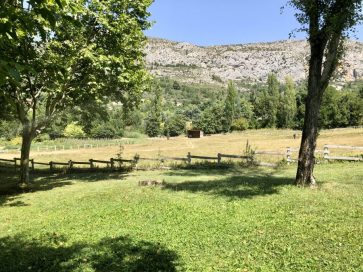 Unsurprisingly, given its location, water is plentiful in Moustiers, combined with the clay soil and nearby woods, it has given birth to a long-standing pottery tradition at the village. During the reign of Louis XIV, the secret of pure white enamel is said to have been passed down by a monk from Faenza to the Clérissy brothers, this transformed the village’s already successful business into a Manufacture Royale. I suspect the artisans were inspired by the colours in the Provençal landscape: the emerald green of the Verdon river, the purple of the lavender, the blue of the sky and the yellow of the sun that shines for more than 300 days a year.

Over the years, linking back to its formation, Moustiers has become an important place of pilgrimage, particularly the 12th century Chapel of Notre Dame de Beauvoir, built on the same spot as a 470 AD Marial temple, which overlooks the village. To reach it you have to climb the 262 steps of the Way of the Cross. The seven oratories which previously marked the path were replaced in 1860 by the fourteen Stations of the Cross, decorated with ceramics by Simone Garnier. It was listed as a historical monument in 1921. 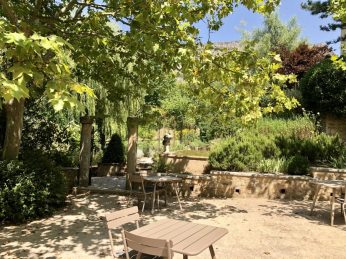 Aside from the lovely and many fountains, there’s also its local parish church which was listed as a historical monument in 1913 on account of its unusual old Lombard bell tower, one of the most beautiful in Provence. But now, time for lunch………………………