One from the vaults: Another Trip down Memory Lane

Of course, at this time of year, we’d normally be watching the Vuelta a Espana and consequently we’re heading back to Marbella for the opening stages of the 2015 race. It’s an area which holds many fond memories for us, as I explain below.

We’ve just returned from a few days in Marbella, one of our old stomping grounds, where we were watching the initial stages of this year’s Vuelta a Espana. It’s an area we first visited almost 40 years ago when my parents bought an apartment there. As newly-weds with little money, we spent many a happy fortnight in the sun, exploring the surrounding area. My younger sisters spent all summer there prompting me to speculate why my parents hadn’t invested earlier. Two words – dollar premium.

In the early 1980s, we spent a month there over Xmas and New Year, taking the ferry to Santander and driving to Marbella via Madrid and Toledo. At the time, it was our longest holiday ever and truly relaxing apart from my beloved, a noted swimmer, getting swept out to sea on his windsurfer. He managed to paddle his way back to shore, albeit several kilometres down the coast, without the assistance of the Spanish coastguard, although it was touch and go.

As the years rolled by, we typically spent a week in Marbella either in May or September when the weather was warm but not so hot as to prevent us playing tennis for several hours. Retirement beckoned for my father and my parents decided to sell the flat, preferring to use the proceeds to holiday elsewhere. We however continued to spend a week there most years, often over the late May Bank Holiday.

From time to time my parents accompanied us, as did their closest friends. On my parent’s 50th wedding anniversary, we spent what was to be our final family holiday together at one of our favourite hotels, courtesy of my Dad, and we’ve not been back largely due to our move to France. 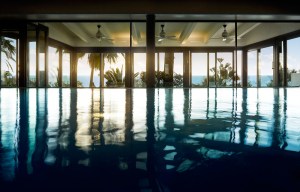 When we saw that the Vuelta was kicking off there this year, my beloved and I decided to take a trip down memory lane. In the intervening years, much has changed but our old haunts are still there and happily flourishing. The trip bought back many happy memories, particularly of times spent with my parents who are no longer with us. We’re not going to leave it quite so long before paying the area another visit.

29 Comments on “One from the vaults: Another Trip down Memory Lane”