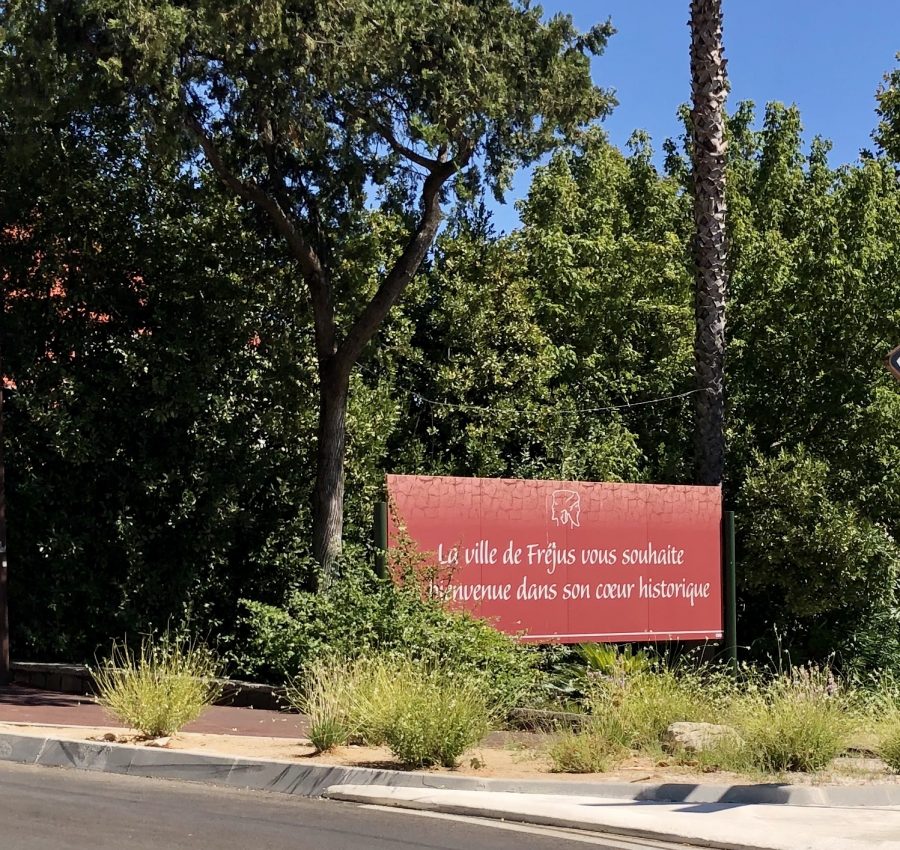 This is the third and last part of our recent trip to Fréjus where we wandered around its lovely Medieval Old Town. I’ve already covered its Roman heritage in Part I, so what happened to it after the fall of the Roman empire?

Its history is very similar to many places in Provence. It was destroyed many times in spite of the presence of the Roman Legions. After the Roman emperor, Julius Cesar gave the port its prosperity it went on to become one of the most important ports in the Mediterranean, however the decay of Rome led to similar decay of the great Roman cities, including Frejus. 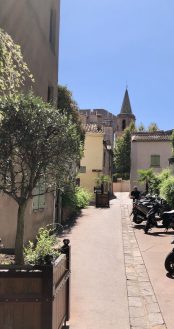 Between 7th and 9th centuries, Muslim invaders repeatedly raided the city leaving many monuments in ruins, while the sea was encroaching more and more on the land eroding the coastline. By 10th century there was very little left of the colony, and sea-borne silt clogged up the port and led to the formation of a huge swampy plain, which then separated the village from the sea.

In more recent times, Napoleon Bonaparte landed at Frejus in October, 1799 on his return from Egypt to ostensibly defend the French Directory in Paris. During WW1, Fréjus became the main centre for hivernage (wintering) for the Senegalese Tirailleurs, (French Army infantry who were largely recruited from Senegal).

Fréjus has more than just Roman ruins, it has an impressive Episcopal complex that includes the Cathédrale Saint-Léonce de Fréjus which was the seat of the Bishop of Fréjus from 5th until 20th century. The church is part of a larger fortified complex of medieval religious buildings dating from between 5th and 13th centuries, when Fréjus was an important religious and commercial centre of Provence.

The cathedral contains two naves, probably built at different times, one of which belonged to the bishop, and the other to the local parish, side by side under the same roof, separated by arches. This arrangement was not unique in Provence; it is also found in the Aix and Apt Cathedrals. An earlier church stood on the same site, some vestiges of which, including a mosaic floor, have been found under the old bell tower and nave of the present church.

The Cathedral’s Baptistry was built in 5th century, making not only the oldest in the Provence region but one of the oldest in France. The state of conservation of this baptistery is remarkable. Up to the level of the high windows, the structure is original. The walls are red sandstone and green sandstone from the Esterel Massif, and brick, mainly decorative.

The Cloister, which served as a place of meditation for the bishop and the dozen canons who served him, was built in 13th century on the north side of the cathedral. It consists of pointed arches resting on double Corinthian columns. The decoration of the capitals of the columns features the key, the symbol of the bishops of Fréjus, and the fleur-de-lis, the symbol of Charles I of Anjou, the brother of Louis IX of France, (Saint Louis), who had become the Count of Provence in 1246.

An upper level was added to the cloister between 1350 and 1360, reached by a monumental stairway. The builders added a wooden ceiling to the lower level and decorated the brightly painted panels with biblical scenes, fantastic animals and scenes of daily life. Only half of the paintings remain today, and the bright colours have been faded by oxidation, but they provide a remarkable look at medieval life.

A residence for the bishop apparently existed in the 5th century, just south of the cathedral but a more imposing palace was built in the 11th and 12th centuries, which housed the bishop, the dozen canons and a dozen beneficiers. The Bishop’s Palace was relatively small and was probably part of the massive wall of the city, three metres thick at its base.

For many centuries the bishops were from local aristocratic families, but from 13th century onwards they were appointees sent from the Papal Court at Avignon. These new, wealthier incumbents transformed the residence from a fortress to a palace, greatly enlarging the space, building large halls and chapels. These works continued from 15th to 17th centuries, largely destroying the medieval residence, and replacing it with a Renaissance style  palace.

In 18th century, as the city went into economic decline, the bishops of Fréjus began to neglect their residence, spending more and more time in Draguignan, the new seat of the bishopric. The palace was abandonned after the French Revolution and while most of it was subsequently demolished, part of what remained became the present Hôtel de Ville in 1912. 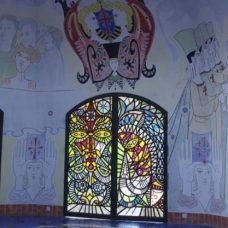 That’s not all. In 1965 the Cocteau Chapel was built to represent the Passion and Resurrection of Christ. Work began in 1961, in collaboration with the architect Jean Triquenot, when Jean Cocteau drew up the plans and specifications for the decoration of the chapel. After the poet’s death in 1963, Edward Dermit created the paintings and frescoes based upon the sketches of Cocteau. Ceramics were produced by Roger Pelissier. The chapel itself was designated an historic monument in 1989.

Unsurprisingly given its huge historical legacy, since 1987 Fréjus has been known as a “City of Art and History“. This designation shows it has demonstrated a commitment to preserve its archaeological and architectural heritage. Moreover, the local community and its leadership are recognized for their awareness and sensitivity to their architectural treasures.