One from the vaults: Postcard from Como 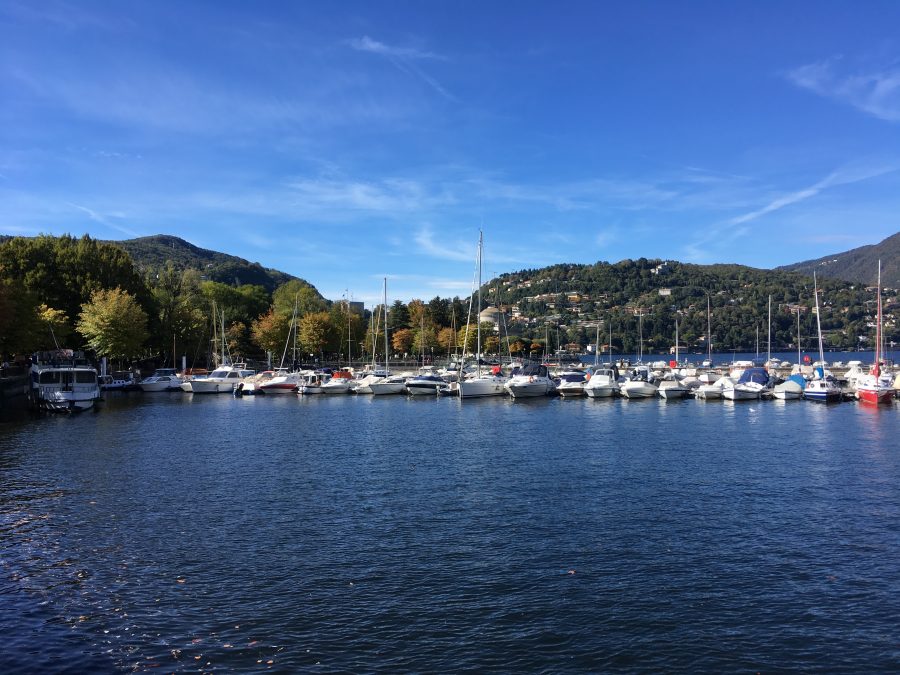 Although we’ve not visited for a few years, in the past we’ve gone to watch the last so-called Classic bike race of the season around the wonderful Lake Como in early October. Here’s a re-run of our trip in 2016.

One of the many advantages of living on the Cote d’Azur is its proximity to Italy and La Dolce Vita. We watched Il Lombardia for the first time last year which afforded us an opportunity to make our maiden visit to Bergamo. This year, the course route was reversed and the race started in Como and finished in Bergamo. The ideal opportunity for a quick trip to Como to see the last WorldTour race of the season and one of my favourite Monuments.

We set off early on Friday morning, eating breakfast en route. Or I should  say that my beloved breakfasted while I watched enviously. Sadly, I’m still forbidden coffee and pastry cream filled croissants! The sun shone and the first part of the drive along the coast is glorious. As soon as we turned left before Genoa, the clouds put in an appearance. One reason to never live anywhere other than on the coast. 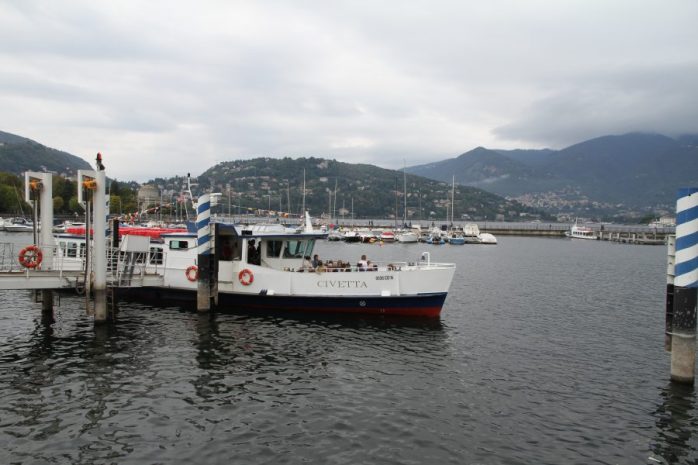 We arrived in time for lunch on the lake. Sadly, it was a tad overcast but that didn’t lessen the pleasure of eating spaghetti vongole (clams). The afternoon I spent reacquainting myself with the old town. Many moons ago, I would visit Milan regularly on business and usually spend a week-end in Como, just 30 minutes away by train. However, this was a first for my beloved as we’d not really looked around much last year when the race concluded in Como. There’s plenty of cafes and restaurants, an eclectic mix of shops, plus plenty of buildings of architectural interest. 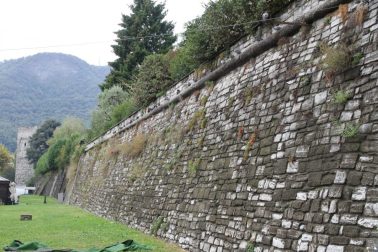 We stayed in a small hotel, right in the centre of town. It was housed in an old building which had been sensitively renovated, pleasingly mixing the old with the new. The WiFi worked, the rooms were light and spacious and the bed comfortable. The polished concrete floors and slate staircase looked good but, as we were later to discover, magnified every sound. Sadly, soundproofing between the rooms had been omitted which meant even heavy sleepers like me were in for a rude awakening. That was the only blot on a lovely week-end.

Neither of us felt particularly hungry at dinner time so we cruised a few of the bars which all have small serve yourself buffet tables of olives, grilled vegetables, pasta salad, pizza, focaccia etc to accompany their drinks, meaning we had no real need for dinner. 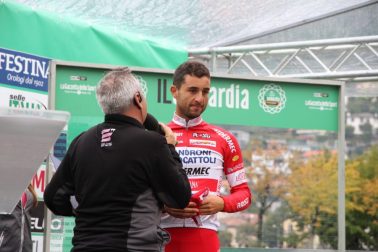 The sign-on for Il Lombardia took place less than 100 metres from out hotel meaning we rolled out of bed, grabbed breakfast and pitched up for a ringside seat. For many this was their last or nearly last race of the season but they were in for a long day in the saddle as the course had been reworked to include over 4,000 metres of climbing, much of it in the latter part of the race. It had rained heavily overnight and while still overcast, it was drying out as the riders departed from in front of the cathedral for their parade around the town. 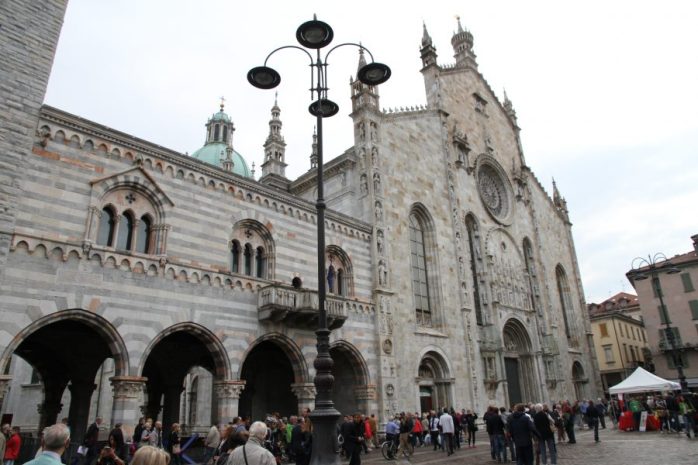 As the crowds started to disperse, a handful of riders were racing to catch up. 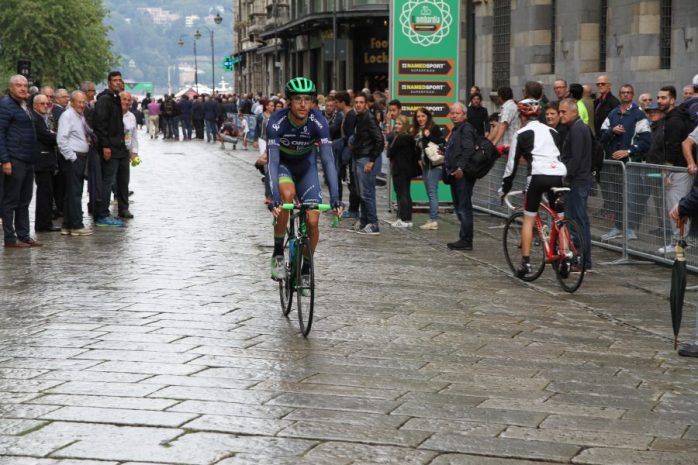 Obviously, they didn’t get the memo about the time of the race start or, if they did, they hadn’t read it. These included the eventual victor Esteban Chaves (Orica-BikeExchange). It’s thirsty work watching racing, so we retired to a nearby café for fortification.

Rather than drive over to Bergamo to watch the race’s conclusion, we had arranged to meet friends for lunch at a local seafood restaurant for oysters and lobster – allowed under my regime. Dessert was a vegan ice cream from the shop next door to our hotel. It’s rare I can indulge in any dessert, let alone ice cream and I feel I showed great restraint by only darkening the shop’s door just the one time. After a disturbed night’s sleep, we had a power nap before watching the race conclusion on the television.

The route is surprisingly undulating, even alongside the lake, as the road frequently rises and falls around the surrounding hills. My beloved and I have frequently ridden around here but not this time. Having seen the forecast, we left the bikes at home. Luckily for the peloton, the rain only fell in the final kilometres of the race. Many had taken advantage of the short-cut back to Bergamo once their work for the day was done. Only a handful of riders finished the course which had been animated by two riders we know well – BMC’s Damiano Caruso and Cofidis’ Rudy Molard. We’d been enthusiastically cheering them on but sadly their early break didn’t succeed.

It was a later one which took the glory. It was a thrilling and fitting conclusion to the 2016 WorldTour season which saw Movistar finish top team for the fourth consecutive season and Peter Sagan (Tinkoff) claim the UCI top rider spot. He’s had a fantastic season, dispelling the myth of the curse of the rainbow jersey which I’d love to see him retain next week in Doha.

Again, after that sumptuous lunch, it was drinks and nibbles with friends from the cycling world that evening where we enthusiastically discussed the many merits of the day’s race. A great way to pass an evening.

We were again woken up several times in the night by the other hotel guests returning to base. Consequently, we rose early and headed home where we knew warm sunshine awaited and we could go for a spin on our bikes. Lunch and dinner were courtesy of a superb delicatessen in Como. So we spent a relaxing day though opted for an early night to catch up on those lost hours of sleep.

9 Comments on “One from the vaults: Postcard from Como”