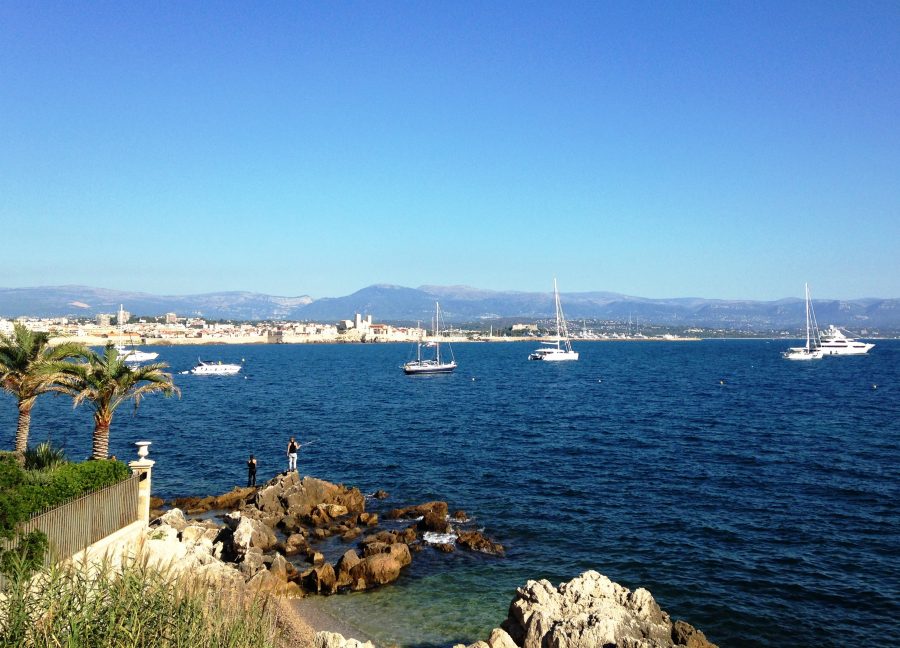 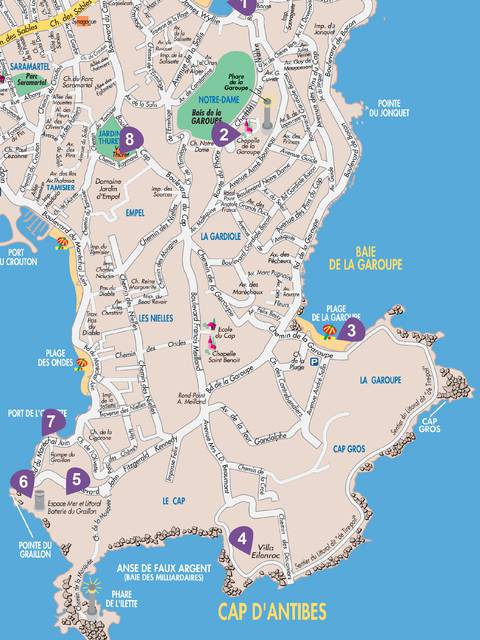 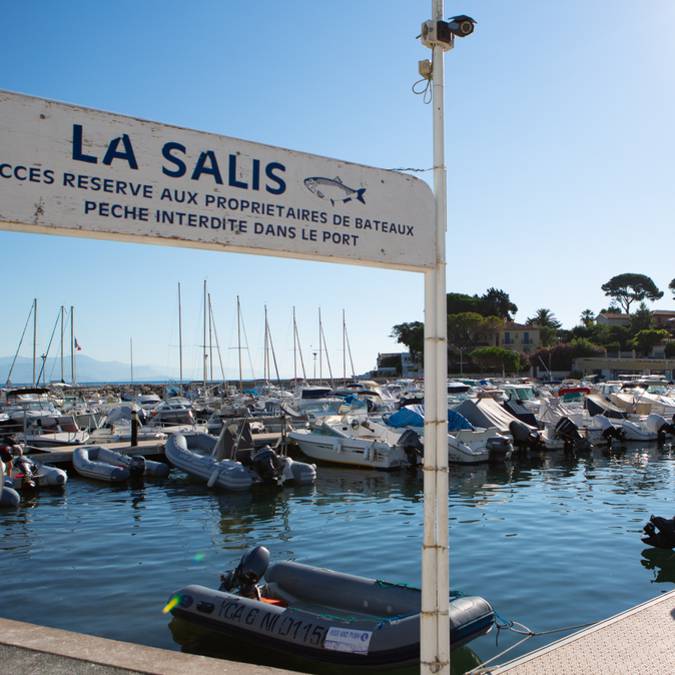 On the west coast, at the start of Cap d’Antibes, is a small renovated harbour called Port de la Salis, a natural harbour for boats. First built in 1911, followed by a breakwater ten years later. Over the next 50 years, the breakwater was enlarged three times, and two wooden wharfs and a harbour master’s office were added. In 1979, everything was destroyed by a tidal wave. In 1995, both the port and the harbour master’s office were refurbished, and then fully renovated again in 2011. The port covers an area of around half an acre and has moorings for 220 small boats not exceeding 6m.

Opposite the harbour is the start of the Chemin du Calvaire which leads to the Garoupe woods, 9 hectares of dense, unspoilt vegetation. Property of the Conservatoire du Littoral, it’s great for a stroll. Beyond it is the Garoupe plateau, which is also accessible by two and four wheels via Route du Phare, where you’ll find the French navy’s lighthouse and the semaphore, the Peynet oratory, and the beautiful Garoupe chapel, which is a listed building.

A little further south, still to the west, Garoupe bay, with its small private beaches, is one of the starting points of the protected coastal hiking path,  Sentier de Tirepoil. The path, a 5km loop, is readily accessible with the right footwear. 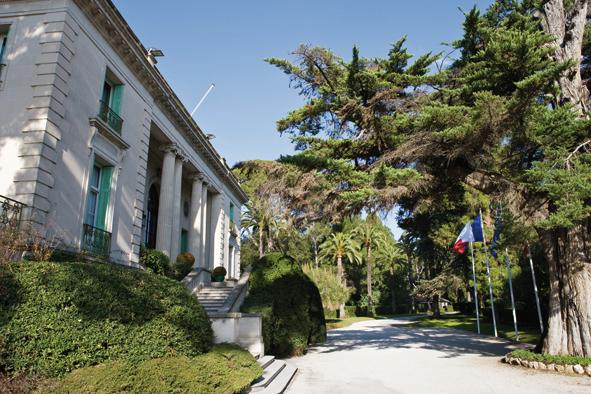 Built in 1867 to the plans of Charles Garnier, who had just built the famous opera houses in Paris and Monte-Carlo, the Eilenroc villa was commissioned by the former Governor of the Dutch East Indies, Mr. Hugh Hope Loudon. Its name is an anagram of his wife’s name, Cornélie.

The new owner in 1873, Scottish philanthropist James Wyllie, surrounded himself with talented gardeners who transformed the rocky terrain and scrubland around the Villa into 11 hectares of gardens with traditional Mediterranean species.

The villa was subsequently owned by Louis and Hélène Beaumont who hosted fabulous parties with guests such as Zelda and F Scott Fitzgerald. In the 1980s, their descendents donated the property and its gardens to the town of Antibes which has subsequently renovated and updated both, plus added a rose garden (open to the public seasonally) and an olive grove with 54 olive trees symbolising the number of new Antibes residents born in the first month of the new millenium.

Travelling – or should that be riding – east on the right-hand side of boulevard John Fitzgerald Kennedy is this magnificent place which hosted writer Jules Verne, who spent six winters there turning his novels into plays for the theatre. The three-storey property was built in 1865 by Adolpe d’Ennery, a theatre playwright and impressario, who’d been introduced to the area by his friend who owned the villa below.

In 1905, the villa was bought by Sophie Desplans, the daughter of Napoleon III’s private doctor and the villa remained in the family for the next thirty years. In 1953, it was purchased by local doctor Jean Joannon who died in 2013 whereupon the villa changed hands and been faithfully renovated.

Not numbered on the map, but further along on the left-hand side, in the middle of a large park, stands the majestic luxury hotel: Hôtel du Cap-Eden-Roc. Previously called Villa Soleil, it was built in 1869 by Hippolyte de Villemessant (owner of the French newspaper Figaro) who typically used the place for convalescing artists and writers. Sold in 1887 to Antoine Sella who transformed it into a luxury hotel, though it was his son, André, who from 1914 established its mythical fame.

It’s a popular filming location and has featured in a number of films, including the 1971 Bond movie ‘Diamonds are Forever.’ Stars flock here during the Cannes Film Festival and the regular gala events. It is one of the finest examples of luxury hotels on the French Riviera and it’s now part of the Oetker Collection.

On a 2.2 hectares natural site belonging to the Conservatoire du Littoral, its coastal fringe is classified as a Natura 2000 site. It hosts the Espace Mer et Littoral (Sea and Coastal Area) which aims to make the natural riches of the Mediterranean Sea and in particular  Cap d’Antibes known more widely. Open to the public from 15 June to 15 September, it presents numerous exhibits and eco-tourist events. 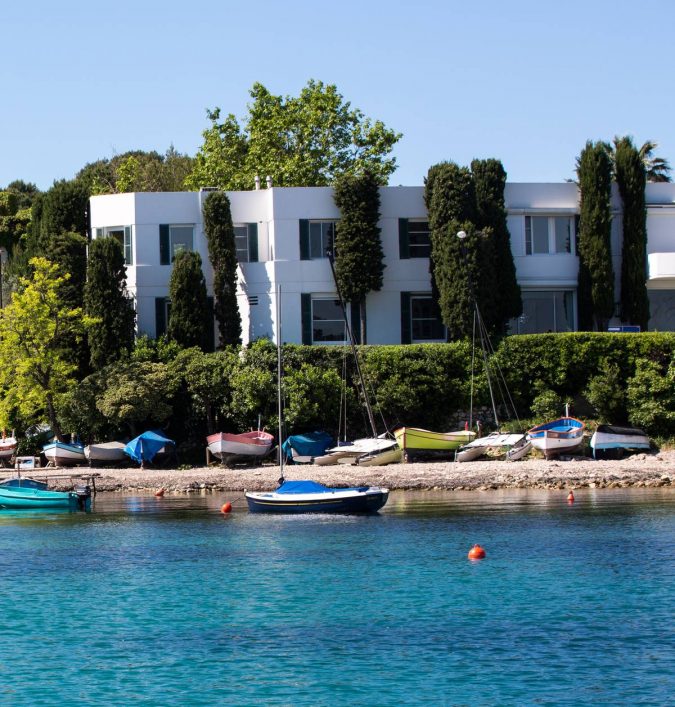 Villa Aujourd’hui was built in 1938 for a wealthy American, Audrey Chadwick, by the American architect Barry Dierks (1899-1960) who spent his entire career on the French Riviera. The villa follows the curve of the road, and is situated next to Port de l’Olivette, a small harbour that berths traditional fishing boats.

It is one of the most beautiful modern houses in the region with simple forms and minimal lines, The house was bought just before 1950 by Jack Warner, co-founder and chairman of Warner Bros, and guests included a host of Hollywood notables such as Charlie Chaplin and Ava Gardner.

In 1857, the botanist Gustave Adolphe Thuret bought a small piece of land on which he built a villa and planted then unknown plant species in its gardens. Now owned by the State, the  botanic gardens house a study and plant centre. Listed in 2007, the Thuret gardens have long fascinated. For example,  Georges Sand wrote in 1868 that it was “the most beautiful garden that she had ever seen in her entire life.”

But that’s not all! There are other places of interest which are not numbered on the above map.

The distinguishing feature of this villa is its vivid colour. It was built in 1937 by the Cannes architect César Cavallin. It was built on principles of functionalism favoured by the architects at the time and was inspired by the ocean liner style: portholes, tubular hand rails, masts, etc.

Designed by Barry Dierks for Anthony Edgar Somers in the first half of 20th century. Villa Hier was used as Michael Caine’s character’s house in the movie “Dirty Rotten Scoundrels”. Quite appropriate given the scandal surrounding its current ownership.

This 12-hectare property located on Cap d’Antibes is at the heart of a money laundering scandal. Acquired by a Swiss businessman, Alexander Studhalter, the residence is said to be owned by a Russian oligarch and senator, Sulayman Kerimov who allegedly used nominees to buy four villas on the Côte d’Azur – Hier, Medy Roc, Lexa and Florella – or more than 90,000 m² in total . Villa Hier has since been seized the Nice courts.

This exceptional Victorian château was built in 1927 for English aristocrat Sir William Pomeroy Burton to the plans of architect and interior designer Armand Albert Rateau. It was later leased in 1938 to the Duke of Windsor (King Edward VIII of England) who had abdicated his throne in 1936 in order to marry Wallace Simpson. It was sunsequently owned by shipping magnates Aristotle Onassis and Stavros Niarchos.

In the 1980s, the chateau suffered from a fire that damaged the house and surrounding trees and it was left as a derelict shell. It’s currently owned by the Russian billionaire Roman Abramovich, who carried out a four-year long, large scale programme of renovations. The property now has a roof-top pool with garden and sea views, an underground restaurant, gym and cinema room.

22 Comments on “Trip to Cap d’Antibes”