Trip to Fayence: Part I

We’ve had a look around some of the villages perchées (perched villages) in the Niçois hinterland, now we’re going to take a spin around some of those in the neighbouring Var. Whether they are on a hillside, perched on a rocky outcrop, huddled against a cliff or tucked away amongst the vineyards and olive groves, the villages of the Var also exude a certain charm.

Set overlooking the valley, Fayence is one of the larger hilltop villages, tumbling down the hillside in terraces. It’s one of the many perched villages in the Var that we’ve frequently visited largely because it’s often featured in the Paris-Nice cycle race and a number of our local cycle sportifs. It’s one of a cluster of nine pretty, hilltop villages, each with their own, unique identity.

Despite having previously visited the village a number of times, we cannot claim to have really explored all it has to offer. This time however we happily strolled around the empty streets in the warm sunshine.

The name Fayence appeared firstly in 10th century under the name of Faiença then Faienza and finally Faventia. The current village was built in approx. 13th century around the Seigneurial castle (the lord of Fayence was the bishop of Fréjus) and protected by ramparts. However in the Gallo-Roman period the population lived largely on the plain below where there’s now a church.

This 11th century Romanesque chapel dedicated to the Virgin Mary looks almost Florentine as it’s surrounded by cypress trees. Built from local stone by monks from the Abbey of Lérins, it has a squat structure with a Romanesque bell tower and its nave is closed to the east by the vaulted choir in the half dome.

The Saracen Gate (now listed) above is one of its few 13th century vestiges, situated at the base of the village which has retained its defence mechanisms and you can still see the working grooves of the hatch that closed the entrance to Fayence. Nearby is the tiny 13th century chapel, altered in the 17th century, dedicated to St Roch. Also at the base to the village, there’s the Fayence agricultural eco-museum, dating from 1807, which is located in two old mills dating from 13th and 18th centuries.

To fully appreciate the size and layout of the village, you should most definitely wend your way up the main road passing underneath the Town Hall porch, built under Napoleon III, before tackling the narrow winding, cobbled lanes and stairways.

This is because the best view of the surrounding countryside is from the Clock Tower with its splendid tiled Orientation Table. The tower was completed in September, 1807, but following torrential rains in October of the same year it collapsed and was quickly rebuilt. It was finally inaugurated in August, 1808. The Watchtower is the only remaining vestige of the Castle of the Bishops of Fréjus, it was one of the guard towers of the castle which was destroyed in 17th century.

Like most ancient villages Fayence also has a charming selection of fountains (13) and a wash house, some of them are as follows:-

The fountain and the Saint-Clair wash house: beautiful back-to-back fountain with a vast fluted basin. The covered wash house built near the fountain is fed by the pouring waters of the latter.

The Paty fountain: nestled in the heart of the village, this lttle old fountain owes its originality to its oval-shaped basin.

The Gabriel Péri fountain and washhouse: covered washhouse next to a vast fountain, built in 1851. The stone which was used in their construction came from the Sainte Anne chapel demolished during the Revolution.

The fountain of the Place de la République: this majestic back-to-back fountain is next to a classified carved stone washhouse.

The Ray wash house: perpendicular to the Ray path, there are two wash houses. The older one is low with beautiful cut stone copings. The higher one allowed washerwomen to work standing up.

The Rue-Grande du Château fountain: this pretty back-to-back fountain from 1999 bears the Fayence coat of arms.

The boules pitch fountain: the newest, made in September 2010 from stone from the nearby Péjade quarry. 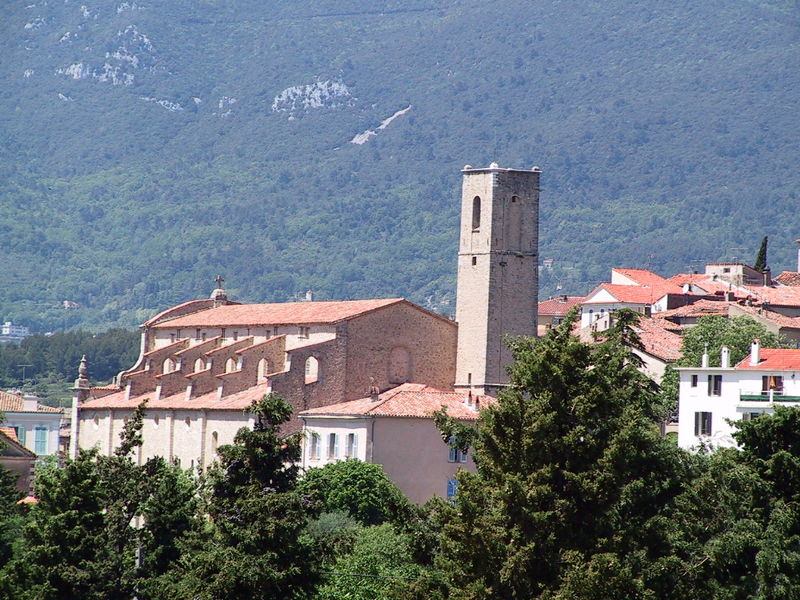 Probably the town’s crowning glory is its baroque Church of St Jean-Baptiste, designed by the architect André Ferraud. It’s the third-largest church in the Var (after Saint Maximin and Lorgues), dating from 18th century which, with its three naves, took 30 years to complete.

It has a main altar and eight side altars including a carved wooden altarpiece representing St Christopher which dates from 16th century. It’s been listed since 1967.

On the other side of the village, there’s the old bread-oven, the Four du Mitan, which was built in 1522 under the bishop of Fréjus, Nicolas de Fiesque. This communal oven was saved from demolition in 1997 by a Fayençois group, the Friends of the Four du Mitan. This association has recreated, inside this small space, a scene from the past. A sound animation lets you listen to a story presenting the history of bread and ovens.

You can understand why the village is popular with tourists as Fayence has plenty of historical and unusual monuments, not forgetting the eye-wateringly steep Muur de Fayence which frequently features in bike races.

50 Comments on “Trip to Fayence: Part I”