Beaujolais Nouveau – what’s all the fuss about? 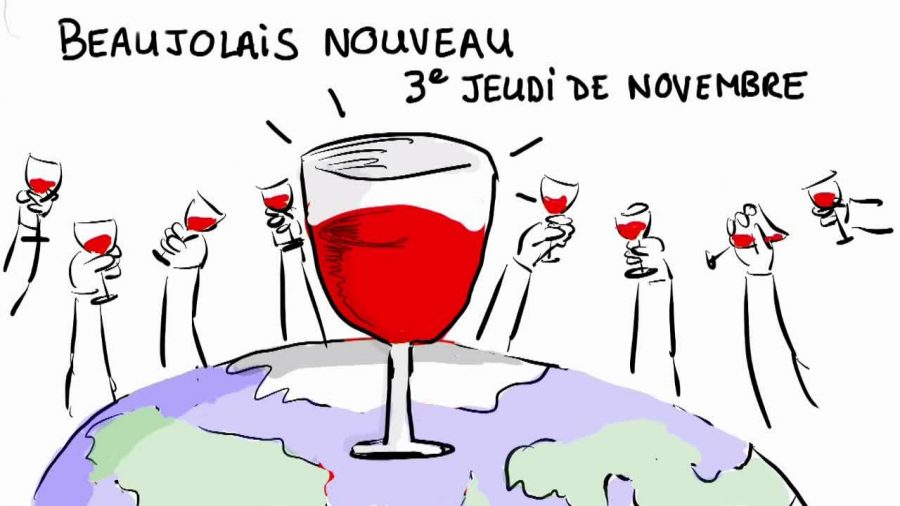 Last Thursday was Beaujolais Nouveau Day here in France, the day these bottles of red hit the shelves. But I know very little about this “(in)famous” wine so I did a spot of research.

Typically, cafés, restaurants and bars fill up with people wanting to enjoy this year’s new vintage, but obviously this year will be different. If you want to try the wine, you’ll have to do so at home. So here are a few useful facts about the wine to make the process more enjoyable.

1. It’s France’s most famous ‘primeur’
A primeur is essentially a young wine that is produced quickly. In the case of Beaujolais Nouveau, it is on the shelves between six to eight weeks after the grapes are harvested. The short time span means winemakers have to use special artisanal techniques and yeasts to speed up the fermentation process.

2. Beaujolais Nouveau wine is very popular
Despite not having the best reputation some 25 million bottles of Beaujolais Nouveau are produced each year. Several million bottles head off to the US and some seven million are shipped to Japan where the thirst for the wine is immense, particularly at the country’s wine spas, where people can bathe in the drink – a much better use for it!

3. But it’s not like the heady 1980s
This was the decade when Beaujolais Nouveau began to cause a lot of excitement around the world. But sales have plunged since then (by 64% in the last 12 years), and today some ten million fewer bottles are sold. Its rise to fame was helped by a producer named Geroges Dubeouf who came up with the tagline: Beaujolais Nouveau est arrivé!

There used to be annual race to get the bottles to Paris and beyond until some ground rules were set.

4. Third Thursday in November
The set day for the release date of the Beaujolais was established back in 1985. It was decided that the third Thursday in November would be the uniform release date. Wines are shipped around the world a few days before but must be stored in locked warehouses until 12.01am on the Thursday. The main festival is in Lyon where barrels of Beaujolais Nouveau wine are rolled by wine-growers through the centre before being opened. Again, not this year!

5. Tough production rules
Beaujolais Nouveau wine has to be made with the Gamay grape, first brought to France by the Romans. The grapes must come from the Beaujolais AOC and must be harvested by hand. The wine is produced using the whole grape, without extracting bitter tannins from the grape skins. The local authority will set the date for the harvest each year, depending on when the grapes are ready.

6. Where is Beaujolais?
The Beaujolais wine takes its name from the historical Province of Beaujolais, the wine producing region to the north of Lyon. The wine is made in the northern part of the Rhône department and southern area of the Saône-et-Loire department which is in the region of Burgundy. 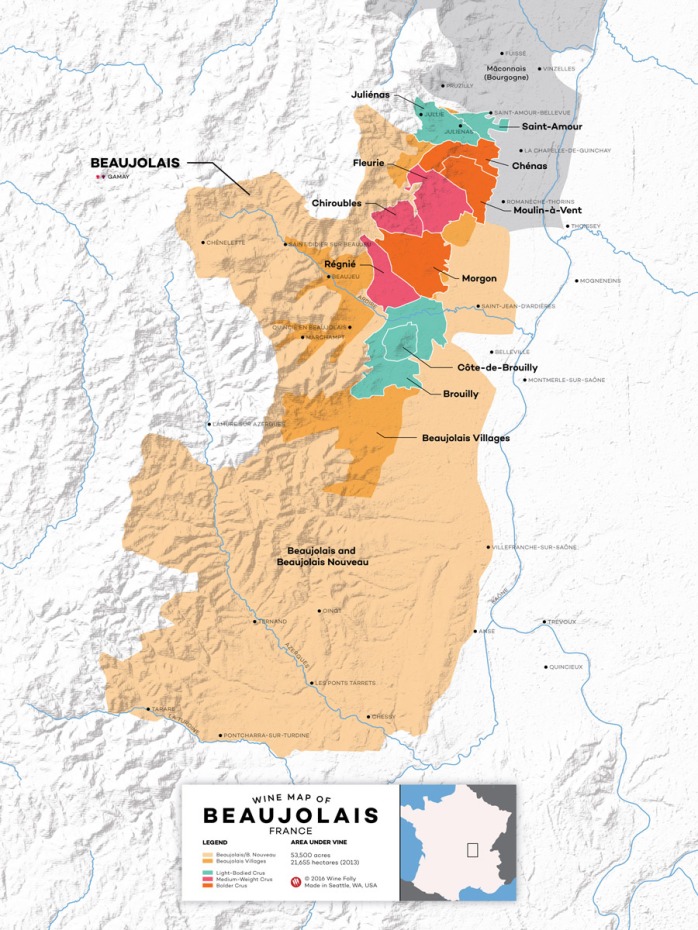 8. What does Beaujolais Nouveau taste like?
This year it reportedly tastes of “black fruits, flowers (peonies and lilac) spices and liquorice” according to the experts. I don’t know about you but I’ve never eaten either peonies or lilacs! However, in the interests of research, we bought a bottle. I get the black fruits but that’s about it!

9. It used to taste of bananas…
Beaujolais Nouveau used to be described as tasting of bananas which comes from the yeast, known as 71B, that is used to make the wine and get it ready in time for its release. And also because of the addition of sugars to boost the level of alcohol.

Back in 2001 over one million cases had to be destroyed as the public turned on the wine after a low quality version flooded the market. It was famously called a vin de merde (shit wine) by one critic. Consequently, producers now try to focus on producing a decentish wine.

10. So what’s going on this year?
There won’t be any of the usual celebrations this year due to Covid-19, but buying wine is however still seen as essential and supermarkets and other food shops still sell plenty. In addition, many cavistes (wine cave shops) have organised “Click and collect” services to help boost sales (you order online and pick up your box at the shop).

11. Not all fast-track wine come from Beaujolais
The idea of making a wine in six – eight weeks via carbonic maceration is a novelty that is catching on in other parts of France where winemakers in the Rhône and Provence have cottoned on to the commercial benefits of getting wine onto the shelves before Christmas.

12. It doesn’t keep
Beaujolais Nouveau is not a wine you can lay down for years with the idea of opening it for a special occasion. But a good bottle of Beaujolais could be kept for six months to a year.

13. How much does it cost?
Part of the appeal of Beaujolais Nouveau wine is that in comparison to other vintages it’s relatively affordable, on average Euros 5 – 15 per bottle.

14. British  Beaujolais?
Yes, the 2,500 bottles of British Beajolais produced by Simon Day at his Herefordshire vineyard Sixteen Ridges sold out in a matter of hours in Waitrose. If you want some, you’re too late, you’ll have to wait until 2021!

29 Comments on “Beaujolais Nouveau – what’s all the fuss about?”