La Chandeleur – crêpes all round!

We’ve had croissants, today we’ve got crêpes! Yes, in France we’ll all be digging out our crêpes pans or non-stick frying pans to celebrate La Chandeleur, a religious holiday that’s been around since Roman times.

Why crêpes and why today?

Well there’s a lot of history to this day – more on this later – but in short, it was a good way to use up the extra wheat ahead of the new harvest. And symbolically, it looks like a sun, so it was a reason to rejoice as the days started to get longer.

The date actually marks when Jesus was presented at the temple in Jerusalem.

Before becoming a religious holiday, Chandeleur stemmed from several pagan traditions celebrating the fertility of the earth and the beginning of the end of winter.

Allegedly in th century, Pope Gelasius I started the Festival des Chandelles on this date, a candlelit procession through the streets of Rome that culminated in placing the blessed candles in the churches. Gelasius linked this custom to crêpes by handing out galettes (a type of savoury crêpe) to poor pilgrims who arrived in Rome that day.

And how about the Chandeleur superstitions?

Here’s a few and they’re all a bit spookyI

In the Franche-Comté region, if someone can carry a Chandeleur candle all the way home from church without it going out, then that person will “certainly stay alive this year.”

In the Haute-Garonne department, if a candle’s wax only drips on one side of the candle during a religious procession, it announces the death of a loved-one during the year.

The same department, also said that “bewitched” people could only be cured by a soothsayer using a blessed altar candle on the day of the Chandeleur who would draw various symbols on the ground, then mix soil from a graveyard with holy water, only to douse the floor with it together with a mix of poppy, fennel, and wild mustard.

Unfortunately soothsaying in a group probably contravenes Covid restrictions so we’ll have to give that one a miss this year. 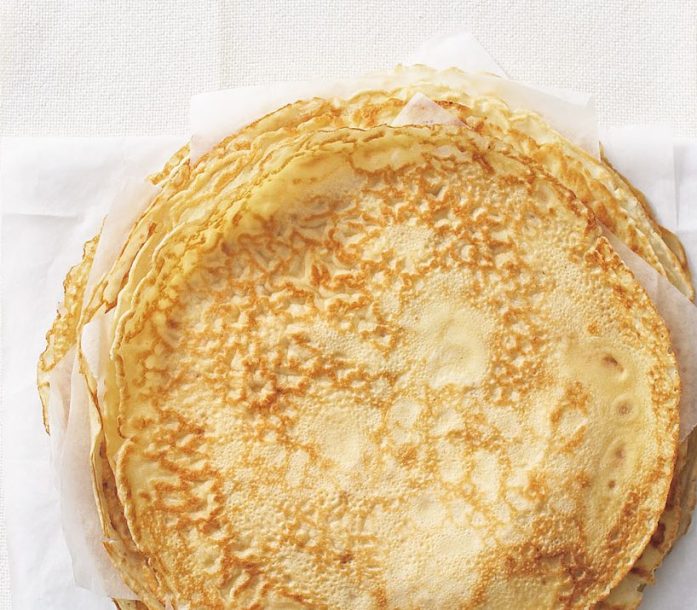 There’s plenty of tradition surrounding the crêpe-making too. Firstly, it’s traditional to have them in the evening and it’s recommended to toss the crêpe in the pan with your right hand while holding a piece of gold in your left – for good luck of course. If I did this, the crêpe would be heading for goodness knows where.

Another old tradition also saw people putting the first crêpe in a drawer or on top of a wardrobe to attract prosperity for the coming year. I certainly won’t be doing this but maybe this is as a direct result of the one above?

Typically on or around that date, we’d have a bit of a do down at the cycling club where everyone would make some crêpes or we’d have a get-together with friends. This year we’ll be celebrating at home on our own in compliance with Covid rules (which also means we don’t have to share our crêpes – bonus).

Today’s weather is a crucial part of the day. Tradition says that a rainy day means another 40 days of rain. Indeed, you might hear your French neighbours say “Quand il pleut pour la Chandeleur, il pleut pendant quarante jours“. Other sayings suggest that a sunny day will bring more winter and misfortune, a clear day means winter is behind us, and a cloudy day means another 40 days of winter.

Understandably, these three all sound better in French. Here they are, in the same order:

Absolutely not! With Mardi Gras (Shrove Tuesday) on 16 February there’s never a better excuse to enjoy crêpes (sweet and savoury) pretty much all month long. If you don’t fancy making them, you can buy them from the local boulangerie!

46 Comments on “La Chandeleur – crêpes all round!”