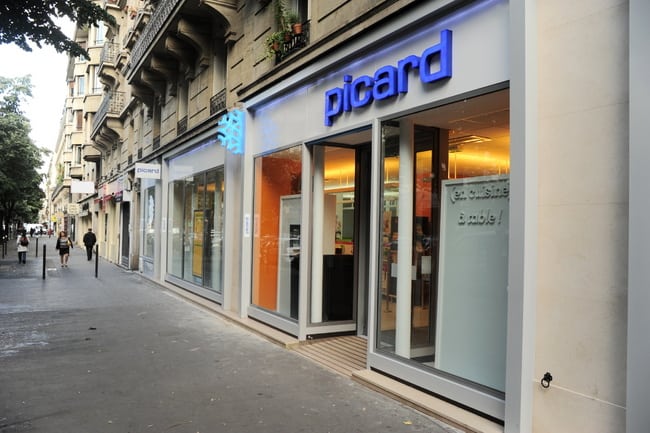 If you’ve spent any time in France, you’ve most likely seen a Picard frozen food store. Officially called Picard Surgelés, it’s France’s leading frozen foods specialist (1,000+ products) and one that I’ve wholly embraced. I particularly love their frozen organic prawns and Canadian lobster.
When you need something easy to cook or just want to have a variety of options at your disposal, Picard should be your go-to place. Maybe you’ll love it as much as I do……….. French frozen food doesn’t get much better than this. Picard foods are all Picard brand (a few exceptions) and extremely high quality, not to mention the selection is unreal. Marks & Spencer’s in UK is now stocking a small selection of their products!

The Fontainebleau-based company operates as both a manufacturer and a distributor, with a network of hundreds of retail stores throughout France. The company also has an e-commerce capable web site and offers home delivery services.

Picard is the French frozen food leader for a reason. They’ve done organic products since 1998 and pride themselves on offering products that are as close to their natural state as possible, without GMOs, hydrogenated oils and only minimal salt. 70% of their suppliers are in France with local know-how, so fruit from Lorraine, scallops sourced from Saint-Brieuc, etc. Maybe most impressive is Picard’s commitment to the environment. They responsibly source, pack and distribute their wares.

How did it all start?

Picard’s growth into France’s leading frozen foods specialist really only began in the 1970s, when the company was acquired by Armand Decelle. Nonetheless the Picard name had already been associated with the frozen products market as early as 1906, when Raymond Picard began producing ice blocks and delivering them to local restaurants, cafes and homeowners in Fontainebleau.  Other sources, however, date the establishment of the Picard family business to the 1940s.

That year marked a revolution in the international grocery industry when Clarence Birdseye recognized the potential for flash-freezing foods on an industrial scale, and the frozen foods industry was born. The frozen food revolution was slow in reaching France, where freezers, and even refrigerators, remained rarities through the first half of the last century but took off post WWII.

In the early 1960s, Picard became a wholesale supplier of freezers and frozen foods to the commercial sector and over the next decade the company continued to add to its range. By the start of the 1970s, the company handled more than 300 frozen food items.

By then, a new consumer market for frozen food products had begun to develop in France. The relatively young supermarket industry responded to demand by broadening their frozen food offerings. At the same time, the country saw a boom in catalogue-based home delivery services. Picard decided to enter this market, launching its catalogue in 1971, backed by a small fleet of trucks. The family-owned company’s operations, with just 10 employees, remained decidedly local in the early 1970s.

Picard’s fortunes changed dramatically in 1973, when Armand  Decelle bought the company from the Picard family. Decelle had already enjoyed a successful career as CEO of Compagnie Générale de Conserve, a canned good business. Decelle had recognised the huge potential of the frozen foods business — in large part because of the superior quality, and convenience, of frozen foods over fresh and canned goods.

Decelle broke with Picard’s past, however, steering the company’s focus back to consumers. The company maintained its small home delivery business (which later grew into a significant part of the group’s business), but now turned its attention to retail stores. In 1974, Decelle opened the first Picard frozen foods supermarket, on the Rue de Rome, in Paris, placing the company in greater proximity to its customers and allowing it to better tailor its product offerings.

Picard quickly built up a range of some 400 frozen food items. The success of the first store encouraged Decelle to open a second one, in Pavillions-sur-Bois, followed by several others through the decade. Supporting the company’s growing retail network was a new logistics facility in Saint-Ouen L’Aumone, opened in 1976, allowing the company to take control of its supply and transport requirements. By the end of the decade, the company operated more than 20 Picard stores.

Establishing a Frozen Foods Brand in the 1980s

In 1980, the company adopted a new store name, Picard Les Surgeles, as well as a new logo featuring a blue snowflake. By then, however, Picard was facing growing competition from the supermarket sector, which had not only begun capturing the major share of the Parisian region’s fresh foods market, but was also dominating frozen foods . Picard’s suppliers soon favoured the larger supermarket groups; faced with difficulties of supply, lower quality standards, and higher pr icing than its competitors, Picard made the strategic move of launching its own brand, starting with vegetables.

The company soon took over much of the processing and packaging of most of the Picard line and  the company moved to a new HQ in Nemours which housed a new state-of-the-art warehouse facility, as well as a packaging plant and a small laboratory. The company established strict quality standards, firmly positioning itself on the high-end of the consumer foods market. Although the company’s prices were higher than those of the supermarkets (and even higher than the prices at the small grocery shops), Decelle, now joined by twin sons Xavier and Olivier, put into place the company’s promotional pricing policy.

Each month, the company’s stores and catalogue placed a number of items on promotion, with discounts ranging up to 40% off. Unlike promotional items at other retailers, however, which tended toward unsold and de-stocked items, Picard’s promotions featured only ongoing ones. In fact, Decelle’s original motivation for the discount pricing policy was to encourage its customers to try new items. Yet the company quickly recognised the added benefit of the discounted pricing, in that the lower prices on those items allowed a customer to balance  spending at the Picard store, bringing their total purchases more in line with supermarket prices. Sales of the group’s monthly promotions regularly accounted for 25% of total sales and more, and remained a mainstay throughout the company’s expansion.

Picard’s commitment to quality and innovation resulted in the establishment of a full-scale laboratory in Nemours in 1986. The company also put in place a team of food engineers, assigned the task of developing new products and recipes for the group’s ever-expanding line. Consumer testing of new products, however, remained in the field. Rather than invest in costly consumer research polling and studies, the company instead preferred to place products directly in its stores. Products were then given a four-month period to prove themselves.

The company took a similarly organic approach to the expansion of its sales network. After establishing some 100 stores throughout the Paris region, the company decided to expand to the south of France. The group’s choice of new target markets was dictated by the reasoning that these were popular vacation destinations for its Parisian consumer base, providing a ready-made consumer base for the brand. The first stores outside of Paris opened in 1987, supported by a new logistics centre at Vitry-sur-Seine. The following year, Armand Decelle turned over leadership of the company to sons Olivier and Xavier, who became co- CEOs.

Despite the change in ownership, the Decelle brothers remained at the head of the company and continued to lead Picard as an independent operation. The backing of Carrefour enabled the company to shift its expansion into overdrive; through the rest of the decade, the company began opening as many as 40 and even 50 new stores each year. By the end of the decade, Picard had established itself as a national chain, with more than 500 stores.

Picard also launched its own e-commerce web site. The group’s Internet sales, while limited to the larger metropolitan markets, built on the strong home delivery unit, which boasted more than 20 delivery bases throughout France into the 2000s.

In 2001, Carrefour sold Picard to a management buyout, led by the Decelle family, and backed by an investment consortium headed by British buyout specialist Candover. The buyout marked Olivier Decelle’s exit from the company with Xavier Decelle continuing as sole chairman and CEO.

With Candover’s financial backing, Picard continued its growth, boosting its store network to 600 by the end of 2004. The company began eyeing the possibility of going public. Instead, in December 2004, the company announced that it was being sold to a new investment group, BC Partners, in a secondary buyout that enabled Candover to nearly triple its initial investment.

The company opened its 700th store in 2007 but in April 2008, Xavier Decelle, was ousted by the main shareholder, BC Partners. For the first time since 1973, the company was no longer run by a member of the Decelle family. In 2010, the company was sold to British fund Lion Capital by way of another leveraged buy-out.

In 2015, Aryzta, a Swiss frozen bakery company, launched a two-step takeover bid for Picard which significantly added to the company’s existing debt burden. Consequent to cash-flow problems, in October 2019, Moez-Alexandre Zouari acquired a 43% stake in the capital of Picard Surgelés, while Aryzta’s remaining stake was sold onto Lion Partners. Let’s hope Picard’s future is in safe hands.