We finally managed to get back to a few more of the beautiful perched villages in Pays de Fayence, Var. If you’re a cycling fan, you may have seen the first village during the second stage of this year’s Tour des Alpes Maritimes et du Var.

The medieval village of Seillans is hidden away in the peaceful hinterland, not far from Grasse, overlooking the plain between the southern Alps and the Esterel, which borders the sea between Cannes and Saint-Raphaël. It is the westernmost of a line of such towns and villages (including Montauroux, Callian, Tourrettes and Fayence) that are south-facing.

Seillans has been formally recognised as one of the prettiest villages in France, and I can understand why. It clings to a rocky bluff overlooking a valley once renowned for its fragrant fields of perfume-making flowers. The route de la Parfumerie commemorates a remarkable woman: the Viscountess de Savigny de Moncorps. In the late 19th century the Viscountess, who owned an estate in Seillans, watched the village devastated by two epidemics.

Cholera had killed off many of its inhabitants, including the Viscountess’ own husband. And, as elsewhere in France, phylloxera had wrecked the vineyards which were the source of its economy.

The Viscountess had an idea, inspired by the perfumeries of nearby Grasse, in 1881 she bought 140,000 jasmine plants, 100,000 rose bushes, lavender, mint and more, devising an award-winning system of irrigation and manufacturing her own Parfum de Seillans, as well as creams and cosmetics.

She was also a redoubtable hostess whose guests included Queen Victoria and Guy de Maupassant, and was active in WWI, during which she transformed the perfumery into a hospital. In more recent years the flowers for the fragrances have been harvested elsewhere, but the perfumery itself remained operational until 2010. Nowadays, the village relies more on tourism and the arts.

This unspoilt hilltop maze of steep cobbled alleys leading to a medieval castle and 11th-century church of Saint Léger became the favourite hideaway of photographer Robert Doisneau and surrealist artist Max Ernst, a 12-year resident together with his wife Dorothea Tanning.

Had it not been for lockdown, we’d have enjoyed seeing their art at the Maison Waldberg, and that of Stan Appenzeller, then lingered over lunch, or at least a glass of chilled rosé on the plane-tree-shaded square next to the gurgling fountain in Place du Thouron. This is one of the village’s most prominent squares which formerly featured an oil mill, shops and shady trees. Place du Thouron took its current form in 1724 with the construction of the washhouse and the fountain.

Turn and turn about to go past La Dolce Vita, Max Ernst’s first house in Seillans, and the quirky Hôtel des Deux Rocs (Hotel of the Two Rocks), a mansion built in 17th century by the splendidly named Sir Scipion de la Flotte d’Agoult. Full of character, odd angles and intriguing period fixtures, today it’s the village’s most popular hotel-restaurant with a terrace on yet another of Seillans’ charming squares.

The hotel is next to the Porte Sarrasine, a gate named, not after the Saracens but after its type of downward-hanging portcullis. The mediaeval houses on this square collapsed in the 1960s, exposing those Two Rocks for the first time.

From here steps lead up to the Château, a looming edifice dating back to before 11th century. The site was occupied by successive waves of inhabitants: Celtic-Ligurians, Romans and, eventually, monks from Saint Victor Abbey in Marseille.

Passing by the adjacent 12th century Church of Saint Léger which takes its name from the Léger bishop of Autun who suffered martyrdom in 671. It was erected in 11th century as the castle and then rebuilt, though it didn’t become the real religious centre of the village until 17th century. It contains a marble font classified as a historic monument and a gift from the Count of Ventimiglia, paintings from 16th and 19th centuries, a 14th century triptych and two altarpieces from 17th century. Its three bells are from 16th to 18th centuries.

Heading back down again to the rue du Valat, which traces the line of the former moat. Above an archway, French flags proudly flutter above the village’s surprisingly grand town hall.

The Font d’Amont fountain Fontaine Seillans les deux rocs. Formerly called: the “Fountain of Love”; it is one of the oldest water points in the village. This fountain bears the arms of Seillans: a white crescent on a red background crowned with fortifications. This coat of arms was copied from that of Lord Bouquier, Lord of Marseille, Co-Lord of Seillans and Knight of the Order of Malta (12th century). The arms of Lord Bouquier were a crescent on an azure blue background. The municipal council decided that those of Seillans would be on a red background.

Seillans may be a fortified village, but its ramparts are actually formed by three narrow streets of houses rising in steep tiers. The cobbled alleys wind through the butchers’ quarter, past former communal ovens and a washing trough, and an area once used as a sheepfold.

In the Middle Ages the rue de la Boucherie was divided in two and the upper part was called rue des Tripoux.  Butchers were formerly regarded as wealthy professionals, as were notaries and glassmakers. To become a butcher, you had to buy your office at the municipal council for a year and commit to keeping meat at the same price. The butchers of Seillans experienced their golden age in 15th century by selling leather to the tanners of Grasse. 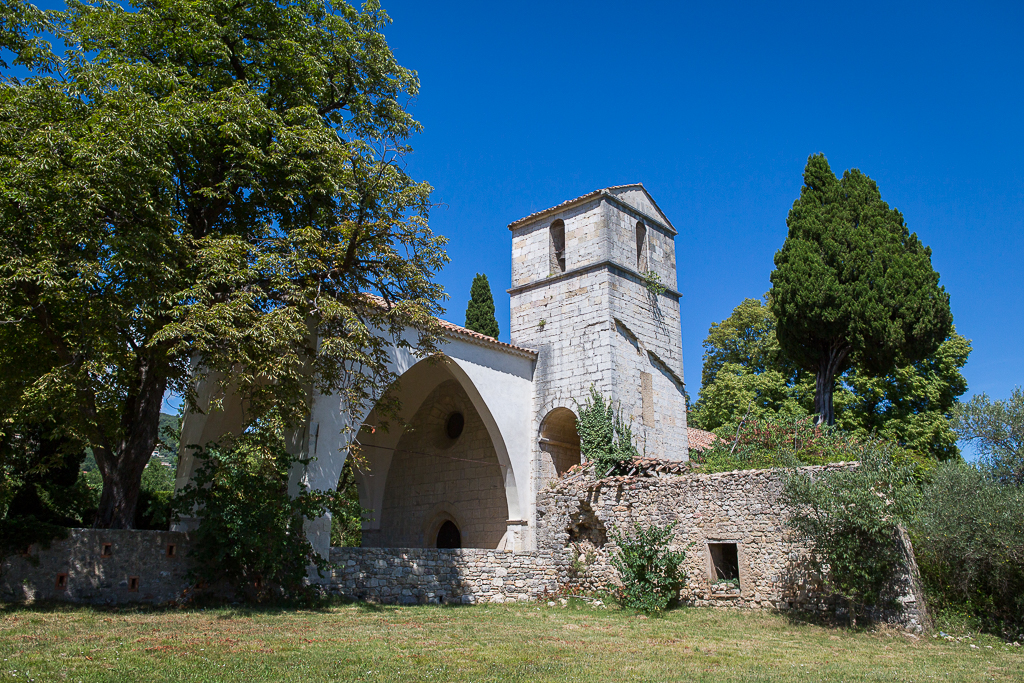 In a wooded grove a little outside the village, the 12th century Notre-Dame de l’Ormeau chapel contains many treasures, some dating back to Roman times. Its jewel is a superb baroque 16th century altarpiece carved out of a single piece of richly painted walnut wood and depicting scenes from the life of the Virgin Mary and a Tree of Jesse.

We didn’t have time to visit the shepherds’ bories – maybe, next time!