After yesterday’s ride to Seillans, we drop into Callian on the way back.

Callian is perched at (325metres/1065 ft) and owes its charm to the ancient streets arranged in a spiral around its feudal castle (12th – 13th century). Formerly occupied by the Celto Ligurians then by the Romans, in the Middle Ages it became an important borough whose influence extended as far as La Napoule (Alpes-Maritimes). History’s legacy is a church with a quadrangular bell tower adorned with glazed tiles, a number of chapels, a castle and medieval alleys.

The village has an authentic charm, nestling around its feudal castle which is one of the oldest in the Var. Standing below the castle is the beautiful quadrangular clock tower with its tile glazed roof standing majestically above the village with its 12th century Chapelle des Penitents just below in the village square, next to numerous local bars and restaurants.

The highest point of the town offers a breath-taking panorama of the mountains of Tanneron and the Esterel. These formed an attractive calling card for the likes of painters Fernand and Nadia Léger, couturier Christian Dior, painter Edouard Goerg and writer Anthony Burgess who all lived here at sometime or other.

The medieval fuedal castle, now a private home, has attractive round towers from the 12th and 13th centuries which flank it on the north-west and south-east sides, in contrast to its long south facade, pierced with cross-beam bays. Renaissance in style since its 1960s renovation by Henry Brifaut, it’s built in the form of a quadrilateral around the main courtyard. The castle has previously housed several families from Grasse, such as Villeneuve, Raphaélis-Brovès, Lyle Taulanne. 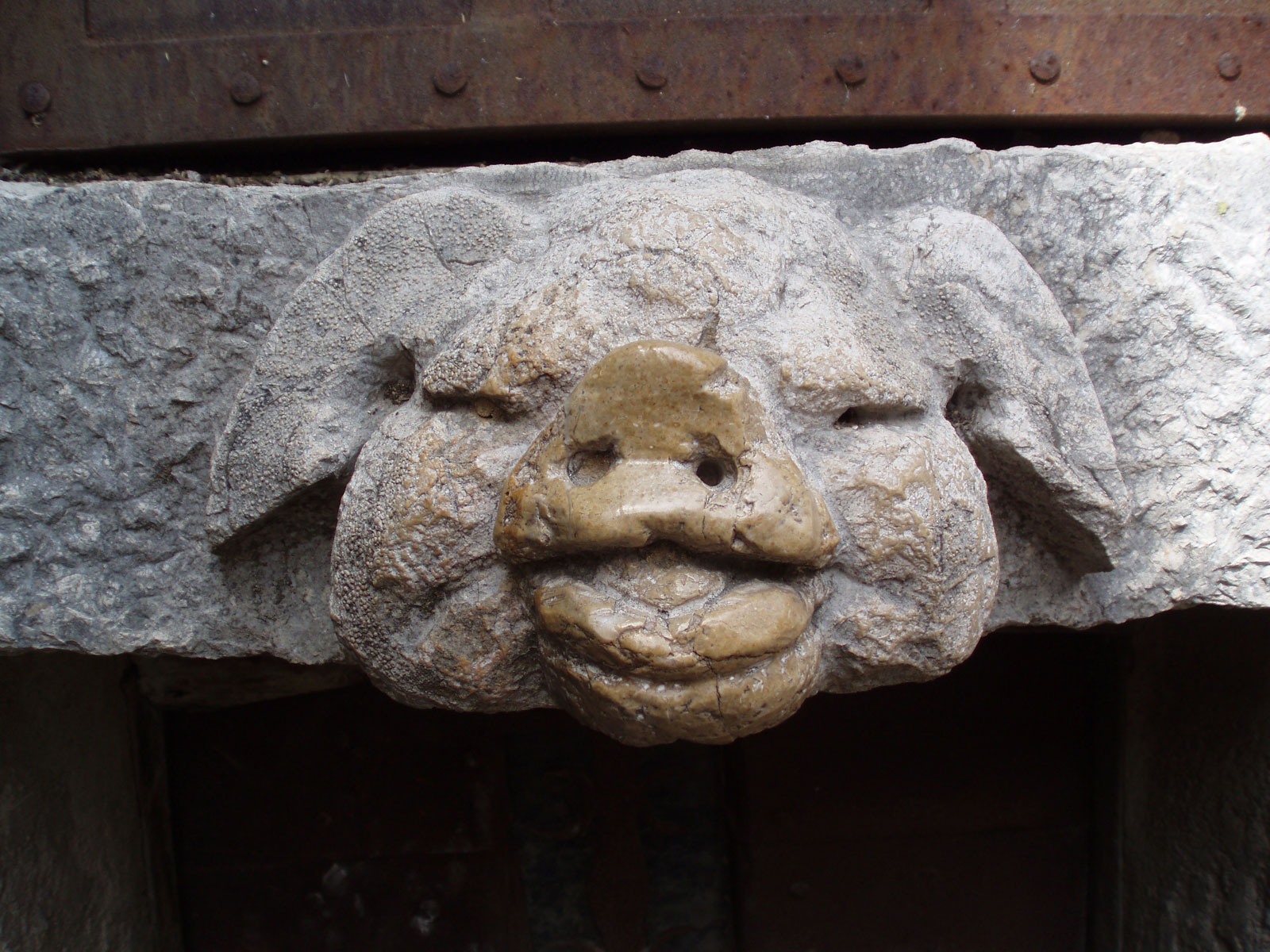 The little stone-carved pig is by Brifaut who was responsible for the renovation of the castle after it had lain in ruins for 170 years. It’s hidden in the hollow of the Clock Tower and aims to bring good luck.

Next to the castle, in the centre of the old village is Place Honoré Bourguignon, with its ancient waterfall whose cascade is fed by the waters of the river Siagnole, along with an oil mill dating from 1815. There are also some remains of the Roman aqueduct that supplied the city of Fréjus with water from Mons. 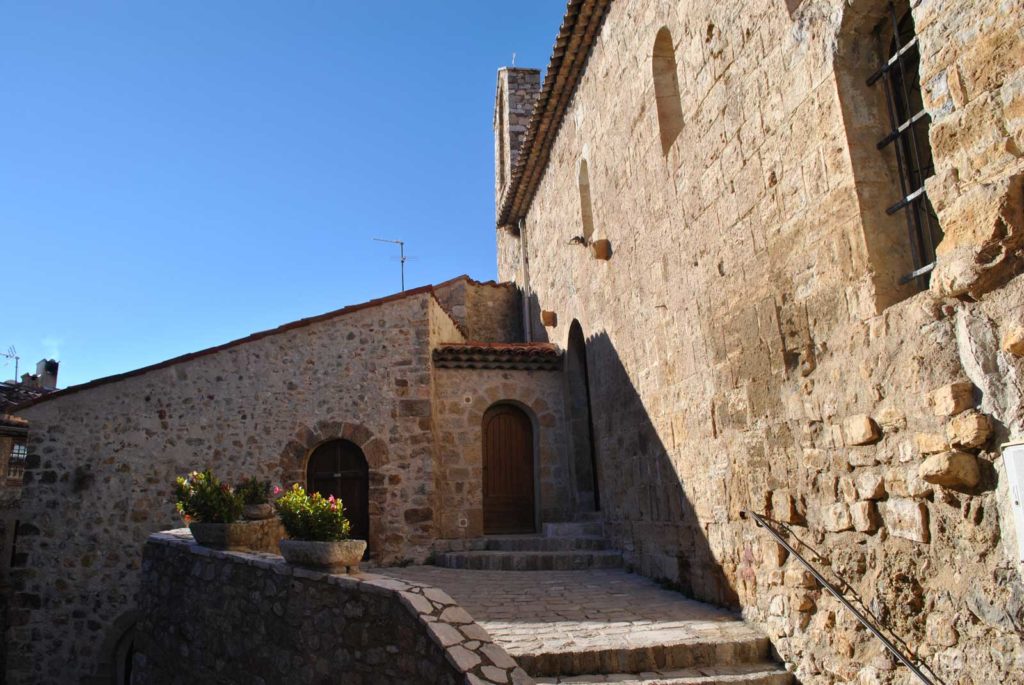 The Chapel of the Penitents, became the parish church as the village developed around its castle. It lost its role in 1685 after the inauguration of the current church though it remained the oratory of the White Penitents until the disappearance of the brotherhood during the Revolution. Today it is used to host exhibitions and various events, including classical concerts.

Château Goerg takes its name from Edouard Goerg, French expressionist painter and engraver (1893 – 1969). Edouard Goerg settled in Callian during the immediate post-war period. This vast house is memorable for its turrets. Built in a wooded park, in terraces, this building adjoins the centre of the village and is now owned by the municipality of Callian. The artist and his wife are are buried in the grounds of the property. 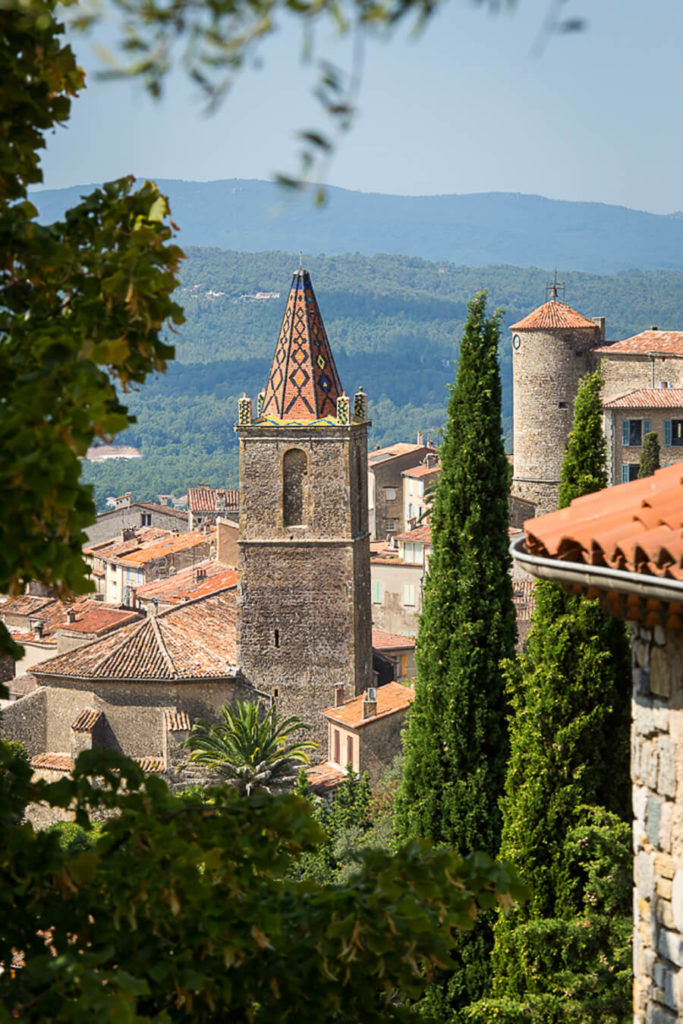 The Church of Our Lady of the Assumption with its glazed quandrangle bell tower was inaugurated in 1685 and replaced the former parish church. The church contains the relics of the patron saint of the village of Sainte-Maxime. Its apse is adorned with a monumental high altar lit by old stained-glass windows.

There are two further chapels of note in the village. The chapel of Notre-Dame-des-Roses is the oldest religious monument in Callian and is an archaeological site from the Gallo-Roman period. The chapel of Saint-Donat, located in the small valley between Callian and Montauroux, is built on a Gallo-Roman sepulchral site (2nd century – 5th century).

So, if you’re over this way, Callian is definitely worth a visit.