One from the vaults: Postcard from Sanremo

Usually we’d be looking forward to tomorrow’s trip into Italy to watch the finish of the first Monument (major bike race) of the season, Milan-Sanremo, planning where to eat lunch and enjoy an Aperol Spritz. Sadly, we’ll once again be doing this at home and watching all the action on the television. Doesn’t however mean we can’t make it a fun experience! This post re-visits the 2016 edition of the race, won by current French national champion Arnaud Demare.

Saturday was just the most perfect spring day, perfect for a bike ride. Instead, I drove to Sanremo on the Italian Riviera to watch a bike race. I love the drive over there: 45 minutes on a motorway with one of the world’s best coastal views. I like to get over there early, in time for a cappuccino and custard-filled croissant, while I pore over La Gazzetta dello Sport’s run down of the race favourites. Obviously, coffee and croissant are off the cards for me but not for my beloved who freely indulged. After all it was going to be a long day with nearly 300km of riding. That’s a lot of television viewing!

Race coverage doesn’t start until just after lunch giving us plenty of time for a spot of food shopping followed by a stroll around in the sunshine, a spot of fare niente or, in my case, some serious window shopping. The fine weather and the race had combined to bring out the crowds all doing pretty much the same as us. Window shopping’s thirsty work so my beloved needed fortifying with an Aperol spritz, a recent addiction.

We walked along the via Roma for a better look at the finish line where harried staff were still assembling everything while the peloton hurtled from Milan to the coast. After checking out a number of restaurants, my beloved decided to choose one I’d eaten at before and we were soon tucking into some delicious seafood. I’m particularly partial to octopus and our starter came with clams, waxy potatoes and artichokes. We followed it with lobster  spaghetti. Carbo-loaded, I was now ready for action just as the television coverage started.

After an hour or so, I had to head off for a meeting with one of the professional cycling teams but fortunately they had television coverage in the team bus and I was able to watch it relatively freely while taking notes and contributing to the discussion. I believe that’s called multi-tasking. The meeting was thankfully short and we could all return to more intently watching the race unfold. 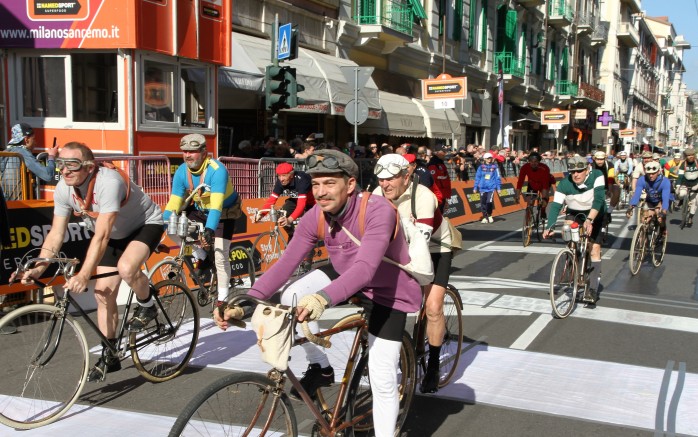 The crowds had swelled, I’d missed the Old Timers who’d set off from Milan just after midnight. Now, that is an epic and heroic ride! They rolled across the finish line, posed for photographs and the cheers of the crowd. The participants provided many with a welcome diversion after several hours standing, watching the big screen.

With fine weather and no wind to speak of, once the early break had been reeled in, the leading bunch seemed larger than in recent previous editions, and nervous, as it approached the last two obstacles before the mad dash through Sanremo. There had been a number of nervous spills, involving both Italian riders and some pre-race favourites, though the majority still seemed to be in with a shout and at the pointy end of the race.

Riders pinged off the front only to be swiftly brought to heel. The crowd became excited when Astana’s Vincenzo Nibali, the Italian national champion, chased down escapee Michal Kwiatkowski (Sky). But it was all for nought, and the sprinters prevailed. As they approached the line, a number were in contention. Neo pro Fernando Gavira (Etixx-QuickStep) went down, hindering those behind. Former French under-23 world champion, 24 year old Arnaud Demare (FDJ) burst from the bunch and powered across the finishing line ahead of Britain’s Ben Swift (Sky) and Belgium’s Jurgen Roelandts (Lotto-Soudal). The first French winner since Laurent Jalabert (1995) and only FDJ’s second monument after Frederic Guesdon‘s at Paris-Roubaix in 1997. The latter was in the following car, working as FDJ’s directeur sportif. 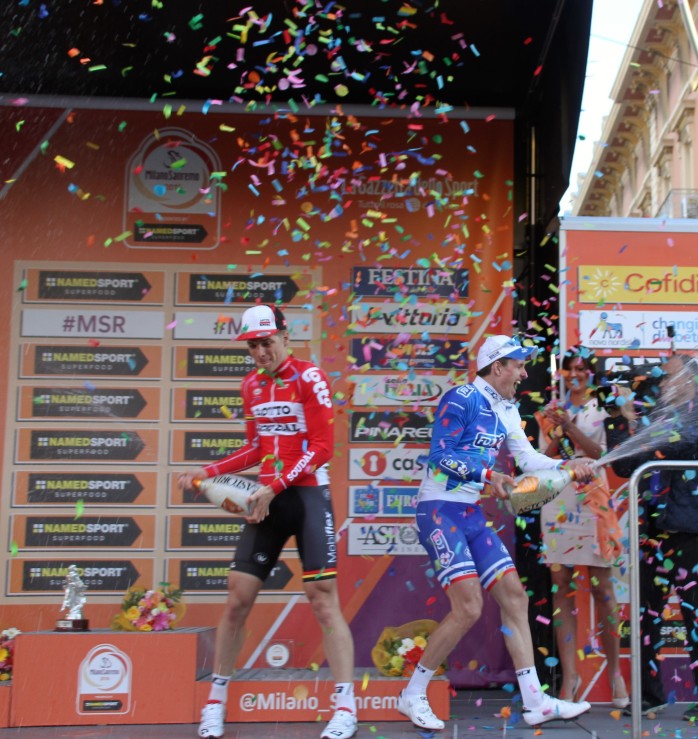 That’s what I love about cycling, sometimes it’s just so unpredictable. Demare had dropped out of last week’s Paris-Nice after winning a stage and had returned home to rest, recover and train. He’d ridden 205km on Wednesday, half of that behind his father on a scooter, but wondered whether he’d perhaps done too much.

Apparently not! We were left wondering how he would fare in the forthcoming Belgian cobbled Classics. A happy end to a wonderful day? Well not before another quick Aperol spritz to toast the winner, it would be rude not to.

7 Comments on “One from the vaults: Postcard from Sanremo”