The House where James lived…….

Even though all of Nice is a tribute to the Belle Epoque, featuring homes that symbolise the golden age of the Côte d’Azur, Villa Le Roc Fleuri is truly one of the city’s most mythical. The facades of these Côte d’Azur villas, châteaux, and palaces, such as the Negresco, the region’s equivalent of the Eiffel Tower, are decorated like wedding cakes. Their glimmering reception halls bear witness to the intense lifestyle and carefree ways of the British, American, Russian, Italian and French aristocracy for whom they were built with great extravagance between the start of 20th century and the Belle Epoque era. 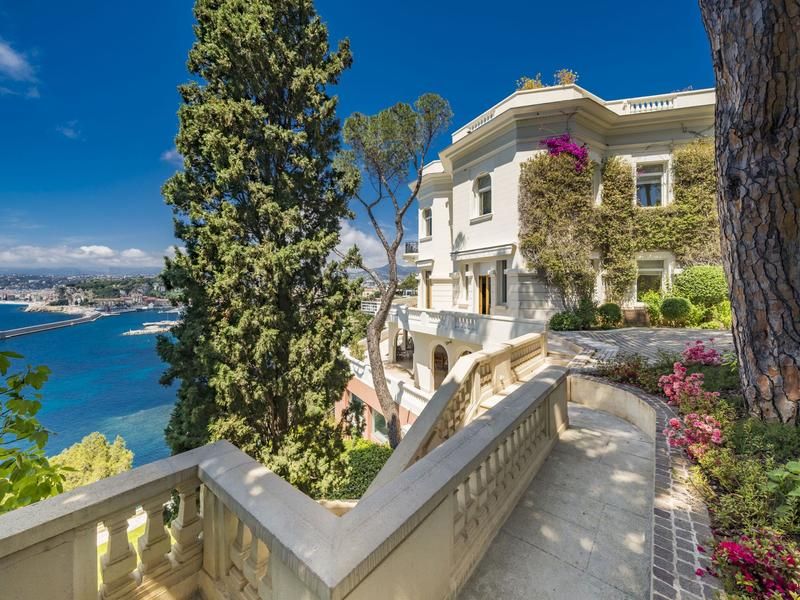 Built in 1928, Villa Le Roc Fleuri sits on top of the Cap de Nice overlooking the Port de Nice and Baie des Anges. Sean Connery, famous for bringing 007 to life, bought the rock-side mansion with his second wife, the painter Michelle Roquebrune, living there throughout the 1970s and 80s.

In 1983, it was even the set of some scenes in Never Say Never Again, Connery’s last film as James Bond.

With an indoor infinity pool, outdoor saltwater swimming pool as well as a spa and gym, it truly is the house in which you would expect to see James Bond drinking a martini – shaken, not stirred. Although the property has since changed hands, neighbours still call it “Sean Connery’s house”.

Stone steps lead you into a covered outdoor reception area, with mosaic tiling at the front door and in the grand reception and entrance hall. The floor-to-ceiling windows show off the mesmerising views of the the Riviera’s coastline.

The master bedroom, which has two bathrooms, comprises the mansion’s entire top floor and is accessible by a private cage elevator, decorated in wrought iron flowers. Four other bedrooms span across the mansion’s six floors, three of which include a walk-in wardrobe and dressing room.

The style is resolutely retro, with decor incorporating Art Deco elements with natural materials from the region.

Adjoining the main villa is a two-car garage with a self-contained staff apartment above. With automatic gates set into stone towers, the villa is very private despite its main position on Cap de Nice.

Describing it as “one of a kind,” Knight Frank suggests the property possesses an almost literary quality.

There’s definitely some Bondness to it. Even some Gatsby. There’s nothing like it and very few properties anywhere with this style, this size, with as large a garden as this or the space.

Once you’ve visited, you can easily imagine yourself standing in the long drive when friends come by, greeting them with a bottle of champagne in your hand like Mr. Gatsby or a Martini like Mr Bond.

Now, where did I put my cheque book?

48 Comments on “The House where James lived…….”